What to expect from Intersec 2020 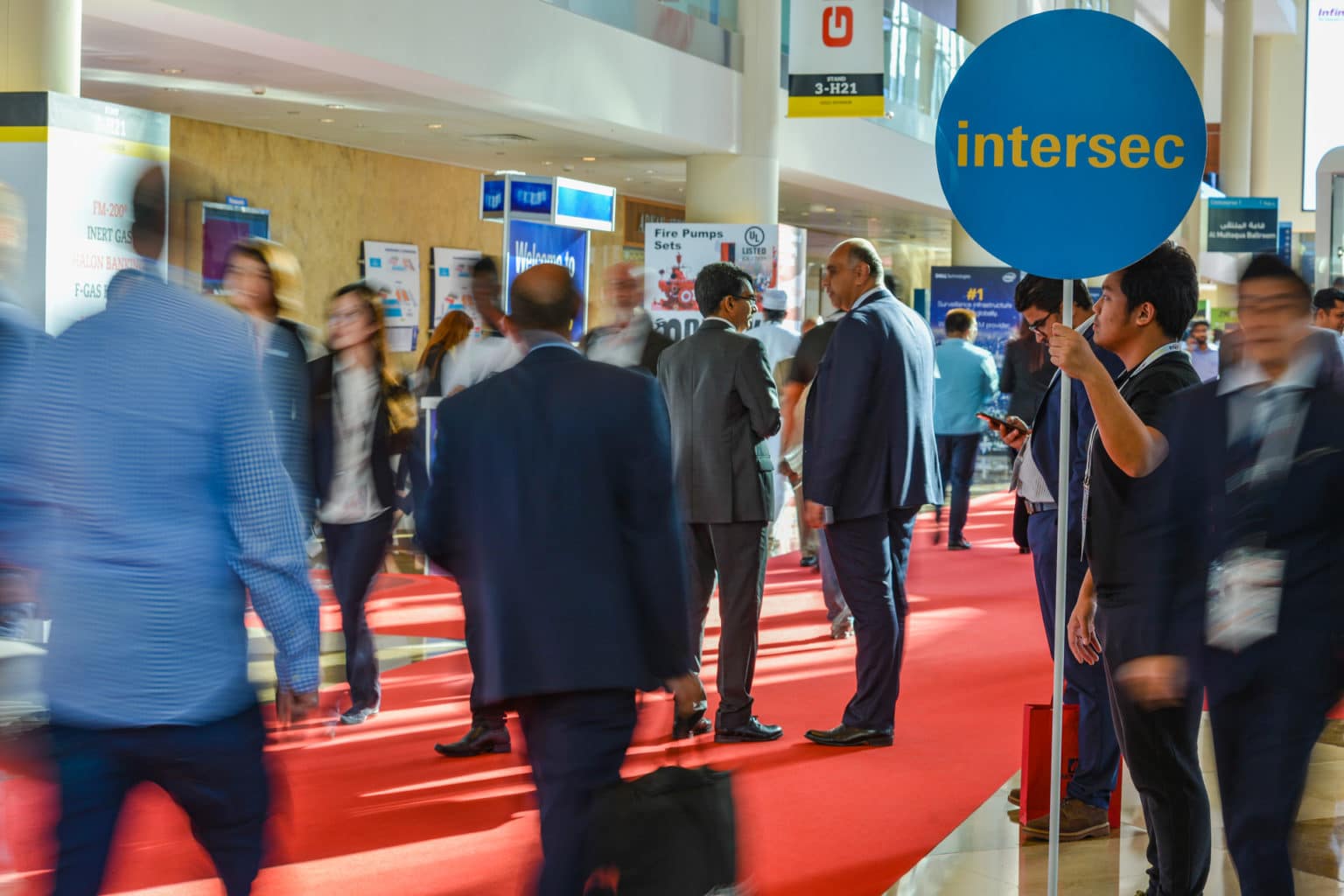 The 22nd edition of Intersec will open its doors with a long list of dedicated features set to complement a packed exhibition floor featuring more than 1,100 exhibitors from 50 countries.

Running from 19-21 January 2020 at the Dubai World Trade Centre, it will once again be home to the biggest names in the business, including two-thirds of the world’s top 50 security manufacturers.

A host of specialised pavilions, conferences and certified workshops will also ensure the expected audience of 34,000-plus trade visitors from across the globe will be privy to the latest technology advancements that will have a profound impact on businesses spanning the entire gamut of industry verticals, from energy and finance, retail and hospitality, to education, government, logistics and construction.

A debut feature for 2020 is the Intersec Arena, which according to Intersec’s Show Director, Andreas Rex will offer insights into new technologies that address cross-sector industry specific challenges, while educating end users on the key considerations when purchasing specific product categories.

“The Arena will be the bridge that connects solution seekers with developers of game-changing innovations,” said Mr. Rex, adding that the unique theatre-style set-up will allow for more interaction between the audience and speakers. “The objective is to analyse the security benefits as well as emerging risks and vulnerabilities with the implementation of latest innovations in an evolving digital world.”

The three-day Intersec Arena will be split into three distinct tracks, with the first day covering digital technologies. Day two will explore security challenges and solutions in key industry verticals before the final day focuses on key requirements and considerations when making purchasing decisions for specific product categories.

Mr. Rex said all the existing popular highlights are returning again, including the Intersec Future Security Summit, with the spotlight in 2020 focusing on disruptive technologies integrating digital and physical security.

“The Drones Pavilion and an indoor Drone Zone, as well as an Outdoor Demonstration Zone of the latest fire rescue applications in action will all be back again in 2020,” added Rex.

“With less than a year until the Dubai Expo 2020, we’re expecting some important strategic partnerships to be announced, while as is customary, many of the 1,100-plus exhibitors will use this platform to launch their latest products in the global marketplace.”

Solutions for the regional market

Intersec 2020 arrives as the Middle East’s commercial security market sets out on a 16% annual growth track over the next five years, with analysts, 6Wresearch estimating market revenues will reach US$8.4 billion in 2025.

According to an October 2019 report by 6Wresearch, growth is driven by increasing infrastructure development and stringent regulatory policies, fuelling demand for super-smart hi-tech surveillance, access control and intrusion detection solutions.

Headlining current demand are video surveillance systems with research pointing to huge potential for advanced technology solutions. “The segment is expected to continue its dominance as governments in the region are putting special focus on the installation of video surveillance systems across the Middle East,” says the report. “Increasing adoption of IP surveillance, video analytics and smart storage would further push the segment growth in the coming years.”

6Wresearch findings are borne out by Intersec exhibitors, many of which use the annual three-day event as their preferred platform for global product launches and industry innovations.

Greek integrated IT solutions provider, Terracom, says cloud computing, artificial intelligence and smart technology will be key influencers for the sector. It will be at Intersec with its ground-breaking QR-Patrol cloud/mobile platform with real time management for patrol guards.

“It allows companies to monitor their premises and equipment and safeguard their lone workers,” explained Dimitrios Zacharakis, Terracom’s CEO.

“QR-Patrol’s design and functionality is based on Terracom’s long experience in security software and adopts the business logic of a Central Monitoring Station. It’s the first application worldwide to incorporate in its arsenal Internet-of-Things technologies such as beacons and wearables.”

Zacharakis believes the commercial security sector is on the verge of a massive overhaul with conventional solutions being relegated to the past. “Up to now most companies have turned to traditional systems for their security needs, entailing numerous limitations such as the lack of real-time control and instant crisis management. This offers us a great opportunity to penetrate the market using a smart real-time solution that can cover the industry’s needs.”

Also planning a regional push at Intersec is Dutch IOT platform, AlarmSecur.com which integrates sensor triggered devices with CCTV to issue push alerts to phones seconds before the sensors are triggered. At Intersec, the company will launch into the region the smallest 4GG videophone which features facial recognition.

AlarmSecur.com’s CEO, Roderik van der Touw says the sector’s future will be dominated by super-smart solutions. “This will be a growth in device integration with video and more video analytics and AI, like facial recognition,” he explained. “There is simply more demand for reliable and high-resolution video security.”

The sector will grow from its current value of US$1.96 billion over the next five years with the UAE, Turkey and Saudi Arabia being the key drivers for the Middle East.

Market demand is largely for fire-fighting systems and equipment, which accounts for 58% of spend, followed by fire detection and alarms systems at 31.8% and emergency and exit lighting taking up 10.3%.

This comes as Intersec Fire & Rescue exhibitors say the sector is subject to massive technology disruption that will change the face of the industry and keep people safer.

Sweden’s Ultra Fog Company is planning to roll out game-changing technology at the show that Mihaiela Bocancea, the company’s Marketing Specialist says will include sound wave technology, video image smoke detection, fire-fighting drones and robots and water mist systems, which massively conserve water compared to their conventional counterparts and will define the industry’s future.

“A fire protection system increases the chance of surviving a fire by more than 80%. Government institutions are increasingly supporting the use of fire protection systems by introducing laws and standards that oblige builders to protect their constructions. Even public transport must be protected. A fire extinguishing system that is capable of early detection is the solution,” she says.

The company is planning to roll out its, ‘Ultra Fog’ systems at Intersec. “It builds upon 30 years’ experience in research, development and manufacturing of highly reliable water mist fire suppression systems and remains at the forefront of life-saving technology,” explained Bocancea.

Apollo Fire Detectors says it will address the industry’s burning issue of discriminating between false alarms and real fires at Intersec.

“Manufacturers are developing new smoke and multi-criteria sensors to improve detector performance in line with the new UL268 7th edition standard, which comes into force in May 2020,” he explained.

“The fire industry as a whole is adopting new technologies in many areas: better firefighting equipment, improved fire simulation to design safer buildings and better use of big data to track and predict fires.

“The technology used in wireless fire detectors is also becoming more reliable, leading to greater use of this technology in environments where wired systems are not appropriate. This includes historic buildings where the building fabric cannot be penetrated and outdoor environments such as stadia and shopping centres,” he explained.

Intersec 2020 is held under the patronage of His Highness Sheikh Mansoor bin Mohammed bin Rashid Al Maktoum. More details about the exhibition are available at: www.intersecexpo.com.

This article was originally published in the January 2020 edition of International Security Journal. To read your FREE digital copy, please click here