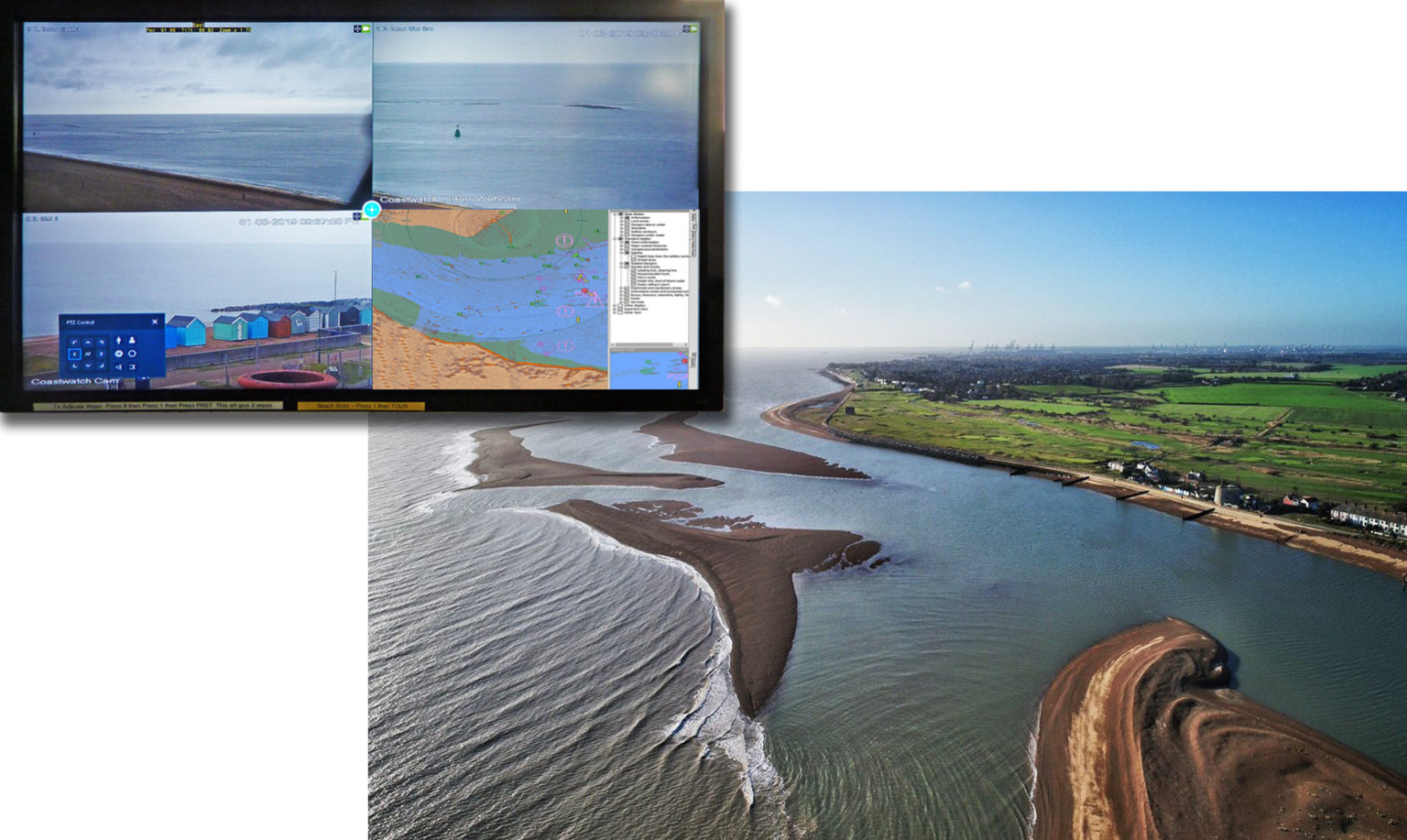 Felixstowe Coastwatch is a charity funded, volunteer-based organisation with more than 50 volunteers available to man lookout shifts. It’s also part of the NCI, a voluntary organisation established in 1994 to restore a visual watch along UK shores, after many small Coastguard stations had been closed.

Under Felixstowe Coastwatch’s territory is the Deben estuary, its treacherous shifting shingle banks and bar can present quite a challenge for maritime navigation, as Ian Clarke of Felixstowe Coastwatch explains: “Half of all call outs from the RNLI Harwich Lifeboat Station during 2016/17 were to attend incidents in this area, so it was clear that additional observation of the area would be beneficial and help to make it safer.”

Felixstowe Coastwatch’s Lookout is built on top of Martello Tower ‘P’, one of the famous ‘Martello Towers’, built in the early 1800s as a defence against a possible invasion by Napoleon. The first lookout was originally built by HM Coastguard (replaced in 1979 by the current structure), who operated the Lookout until 1994. Felixstowe Coastwatch took over operations at the Lookout in April 1996.

“Originally, the first idea to tackle the maritime issues at the River Deben estuary was to build an additional lookout tower,” continues Clarke. “That would have been a prohibitively costly exercise for a charity-based organisation. However, after a visit to the NCI Station at Portland Bill, I was inspired by the use of CCTV there and interested to establish if video surveillance could be deployed to monitor the remote Deben estuary from our existing lookout station.

“The first task was to experience CCTV cameras in action, so we visited the Port of Felixstowe, the Felixstowe Town CCTV system and the Great Yarmouth Port Authority, where we saw the 360 Vision Predator in action. Impressed by the quality of its images, I contacted 360 Vision Technology for a demonstration, at which we were able to record video from the proposed location of the camera mast.

“After the demonstration of the camera’s capability, I was able to prepare a detailed report to our trustees, setting out a comprehensive business case as to why a CCTV camera would offer the best solution to the issues we were facing at the mouth of the River Deben. I was able to use the recorded footage of the demonstration to produce a video highlighting the impressive capability of the imaging technology.”

From Clarke’s report, approval of the project was granted and the 360 Vision Predator Ultra HD was installed by STC Solutions Ltd, after funds were raised from council-allocated budget and fundraising events organised by Felixstowe Coastwatch volunteers.

“When we placed the order, 360 Vision Technology had just launched their Predator equipped with a 40x optical zoom,” Clarke adds. “This was an important factor for us, as the entrance to the River Deben is expansive, and identifying vessels and individuals there would be greatly assisted by the optical zoom of the 360 Vision Predator camera.”

With no line of sight from the camera to the lookout tower, an innovative wireless transmission solution was employed, using a belfry tower at a midway point in Felixstowe, where the signal is relayed to enable control and recording of the high definition images back at the lookout station. “Now operators can view superb live images of the River Deben, to confirm the identity, position and situation of vessels in the mouth of the riverand if necessary, contact HM Coastguard if we observe any problems,” Clarke explains.

Thanks to the broad integration capability of 360 Vision’s Predator Ultra HD, all surveillance video is archived for retrospective investigation, and controlled via a QVIS Viper NVR recorder. In addition, seamless ONVIF integration into Cambridge Pixel’s ‘RadarWatch’, a flexible client display application for radar display and target tracking, allows Felixstowe Coastwatch’s operators to set up virtual tripwire lines across dangerous areas of the river and shallow waters close to the main shipping channel. Once crossed by a vessel, the trip alarms instantly alert operators and provide immediate verification of a vessel’s precise location, along with high-definition visual verification from the Predator camera.

Also displayed as an overlay on screen, via the Predator Ultracamera and Cambridge Pixel technology integration, is Automatic Identification System (AIS) ship transponder information for each vessel, including a compass bearing supplied by the Predator camera’s head, which indicates which way the camera is pointing. “This means we can instantly identify and position any specific vessel we’re seeing with the camera,” says Clarke. “We can also view the banks of the river and its beaches, to ensure that no members of the public are in danger.”

Taking advantage of 360 Vision Technology’s any colour and any finish design offer, the Predator Ultra camera was supplied in a Marine Grade white paint finish, and along with its powerful 40x zoom lens, is equipped with a ½” Ultra camera module to ensure maximum imaging performance, even in low-light conditions.

This innovative installation has been so successful that Felixstowe Coastwatch is currently looking at other areas of the coastline where high-definition 360 Vision Predator Ultra HDcameras could assist with their daily operations, to protect the public and maritime traffic.