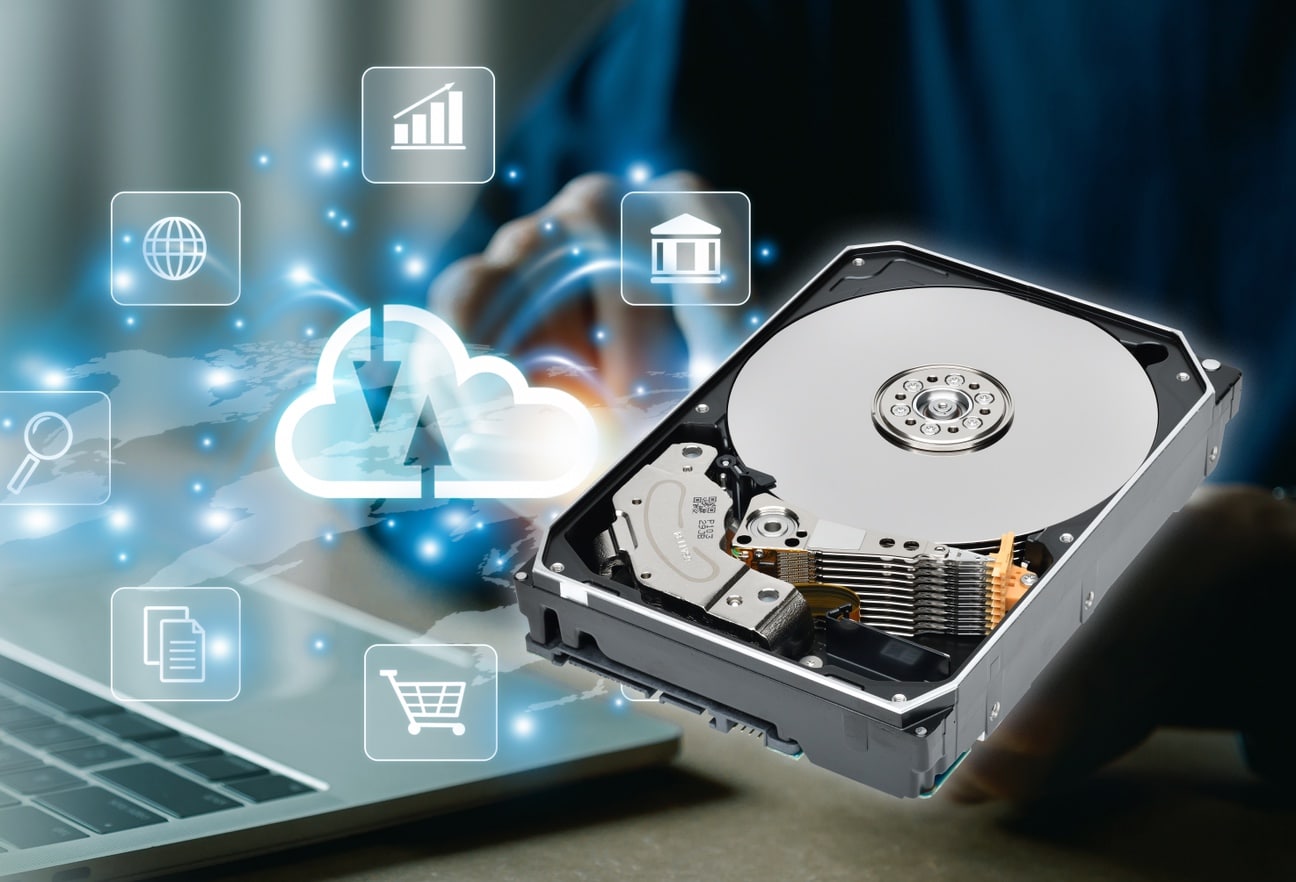 A few years ago, numerous industry analysts were of the opinion that HDDs would be completely replaced by solid state drives (SSDs), with a large proportion of them predicting that this would have occurred by 2020.

It is now 2023 and very much clear to everyone that is yet to be the case, nor will it be in the foreseeable future. The high overall capacities and low cost per capacity unit mean that HDDs remain an attractive option for a broad range of different tasks.

The total amount of data generated and then stored has grown exponentially over the course of the last decade, going way beyond what anybody could have envisaged in the past. Furthermore, it is continuing to rise. Relying solely on SDDs would simply not be possible. Firstly, the quantities of SDDs that are being produced just would not be able to keep up with demands.

Secondly, they are not economical enough to address many of the more cost sensitive applications where large scale data storage is required.

Ongoing engineering developments are helping to keep HDDs competitive. The introduction of helium-filled solutions, for example, has been pivotal. Having the disks situated in an enclosure filled with helium (which is a light, homogeneous gas), rather than in air, leads to less friction when the disks rotate.

Consequently, turbulence issues are mitigated and the thickness of the disks can be significantly reduced. The ability to pack in more of such thinner disk platters translates into increased storage capacity. Within the last 12 months, Toshiba has introduced the groundbreaking MG10 series 10 platter HDDs.

These 3.5″ form factor drives have capacities reaching the 20TB mark. Enhancements in relation to the read and write heads have also contributed. HDD storage density increases of 2TB per year have now become possible – so solutions with 22TB and 24TB capacities are set to arrive in the near future.

Alongside the technological advances just described, there are several key underlying influences that are having a bearing on the global data storage business. Here are some of the most prominent:

In relation to client/PC and boot drives, HDDs have admittedly been replaced by SSDs on a substantial scale. In particular, the compact M.2 form factor with NVM-e interface has become well established in portable computing equipment and smartphone handsets. It must be acknowledged though that suitable SSDs are still about four times as expensive per capacity unit as HDDs (with a 500GB SSD having the price tag equivalent to a 2TB HDD).

It is for this reason that inexpensive PC systems with higher memory requirements are still featuring HDDs.

Greater emphasis on online storage is something that has been witnessed for several years now. Modern society is accessing an ever-expanding variety of cloud-based platforms and doing so increasingly frequently. This can be for streaming entertainment content (like music or films) as well as e-commerce, gaming and social media activities.

The greater prevalence of telecommuting is another factor here. All the data needed for such purposes is contained within large data centers, which mainly use HDDs as their storage media. The optimisation of the processing speed plays an increasingly important role. Although individual HDDs are rather slow when compared to SSDs, the interconnection of large numbers of hard drives disks means that relatively high speeds can be achieved.

While, previously, storage solutions typically consisted of arrays with up to 24 HDDs integrated into one housing and managed by a host computer, today’s configurations with 60 or more disks in one unit are starting to be witnessed – enabling much larger amounts of data to be dealt with. The challenge here, however, is scaling the aggregate processing speed. With 24 hard disks, each of which can transfer data at approximately 280MB/s, the 8GB/s capabilities of the adapter card with 8x PCI-Express Gen3 host interface lanes are sufficient for the theoretical 24x 280MB/s = 6.7GB/s to the host system and into the network.

But, with the prospect of as many as 60 disks being involved, almost 17GB/s overall performance is made available – provided that the bottleneck can be overcome. With the introduction of PCI-Express Gen4 technology, almost 16GB/s can be attained across the eight interface lanes. For further increases, adapter cards with 16x PCI-Express Gen4 lanes are now becoming available. They have a limit of approximately 31GB/s, which is more than enough, even for configurations where 100 HDD have been incorporated into the system.

Making data center operations more sustainable and reliable are areas where HDDs have major roles to play. There are growing concerns about the effects that such facilities are having on the environment; due to the huge quantities of power they consume. Toshiba has conducted comprehensive testing on the high-density JBOD solutions of OEM partners (based on arrays of our enterprise-grade 18TB HDDs), to validate the strength of their green credentials.

The tests show that data centre sites can implement HDD technology that will allow the needs for greater data storage resources to be met while still retaining the levels of energy efficiency that this sector’s ambitious roadmaps stipulate. It should also be mentioned that inclusion of temperature sensing mechanisms in enterprise HDDs means that conditions can be better controlled and greater HDD longevity thus brought about.

With regard to surveillance-related data storage, deployments are now comprised of much greater numbers of cameras with higher resolution functionality. To cope with all of these high resolution video streams, next generation HDD solutions are needed. Given that 24/7 operation is generally mandated, even in harsh working conditions, these must be robust enough for reliable operation to always be assured. As well as being able to purchase reliable, performance optimized solutions, another of the main priorities for customers in this sector is that the associated total cost of ownership (TCO) can be kept to an absolute minimum.

Since they successfully possess these attributes, the Toshiba S300 and S300 Pro series have both shown their effectiveness in a surveillance application context – seeing widespread customer uptake worldwide. They are designed to accommodate up to 64 HD video stream inputs and have a 0°C to 70°C operational temperature range. Curbing system energy consumption here will also be essential, from both an operational expense and a sustainability perspective. As our S300 drives spin at a 5400 – 5700 RPM speed, the amount of energy consumed during recording is markedly reduced. The lower friction exhibited by the helium-filled MG series enterprise drives aimed at high end AI-driven surveillance analysis workloads permits them to run energy efficiently at 7200 RPM speeds.

Fuelled by the increasing demand just outlined, as well as the engineering advances being announced, HDD’s momentum is certainly not being slowed down. This is why Toshiba continues to make further investments in heightening production capacity. We have continued to work closely with data center equipment vendors, surveillance systems integrators, and computing OEMs to bring highly effective new solutions to market that provide real differentiation.

You can learn more about Toshiba HDD technology and its portfolio of products at: https://www.toshiba-storage.com/