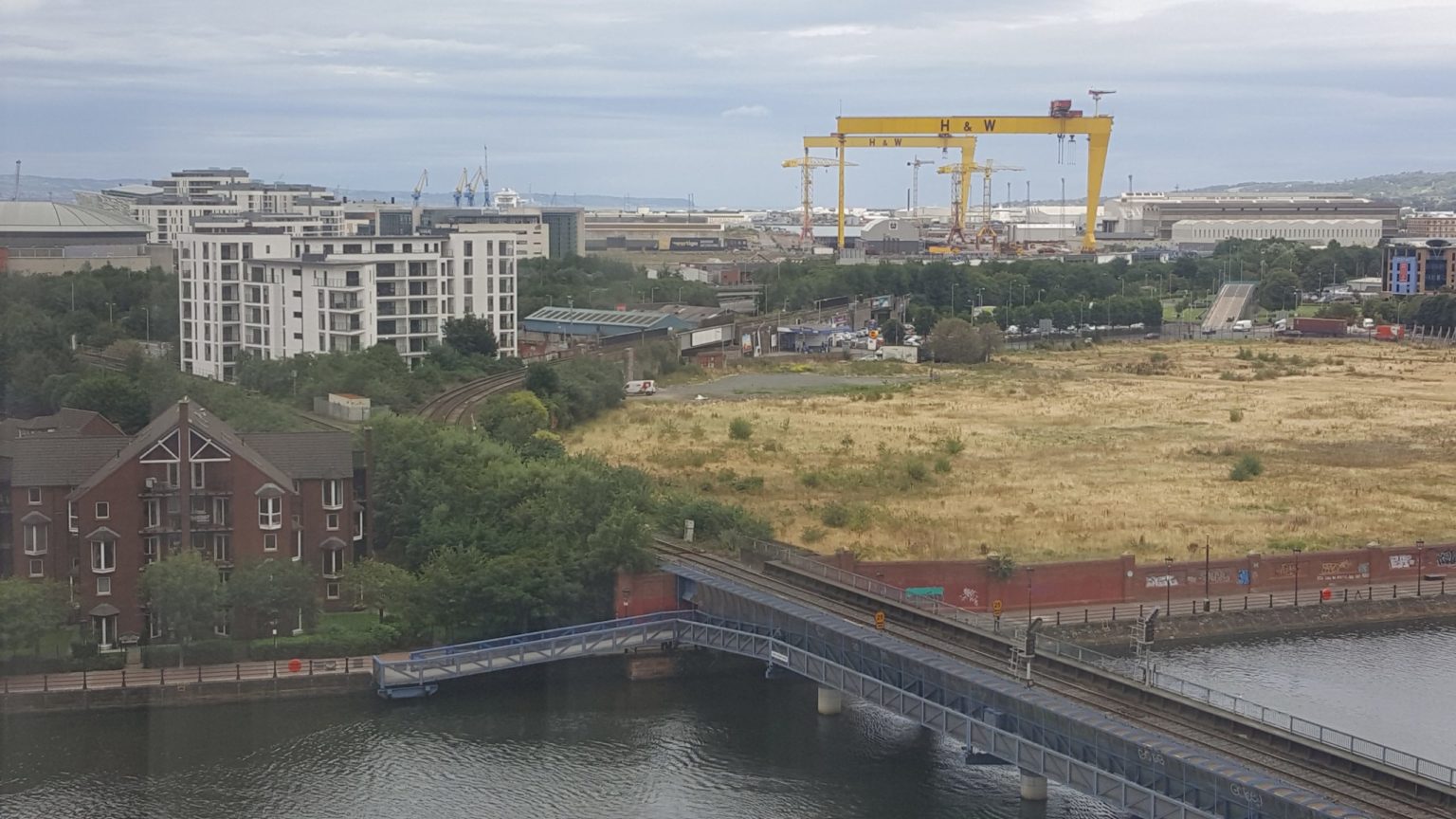 For the first time, we put the spotlight on how the Police Service of Northern Ireland is working in partnership with local communities and organisations to incorporate proven crime prevention measures and techniques into new developments and refurbished buildings.

This work is being carried out today amid hopes that regeneration will prove to be an important route to help achieve safer and stronger communities.

Thousands of buildings in Belfast and other cities and towns across Northern Ireland have had crime prevention measures and techniques built in at the initial concept and design stage to deter and reduce crime. These buildings include houses, apartments, hospitals, schools, universities and other places, such as parks.

This work is being carried out by District and Headquarters-based Designing Out Crime Officers (DOCOs) led by Chris Sloan, who is the Strategic Lead for Crime Prevention with the Police Service of Northern Ireland (PSNI).

The role of Designing Out Crime Officers

It is the role of these civilian DOCO staff to work with architects, landscape designers, builders and registered housing associations to ensure that levels of security meet the requirements set by Secured by Design (SBD), the national police crime prevention initiative, which works alongside Police Services around the UK.

Their reference is SBD’s range of authoritative Design Guides for the design, building and construction industry as well as police forces. The Guides cover a range of building sectors such as residential, education, health, transport and commercial. For example, SBD’s residential Guide is called Homes 2019.

Regularly updated to keep pace with changing patterns of criminal behaviour and advances in design and new technology, the Guides detail police recommendations on the standards of physical security, such as robust doors, windows and locks as well as guidance on development layout and landscaping, such as maximising natural surveillance, creating defensible space and minimising excessive through movement. The purpose of the guidance is to create a built environment where crime is reduced and people feel safe.

DOCOs Nicola Geddis and Shireen Fisher from PSNI Crime Prevention Headquarters Unit, have agreed to share their projects and experiences of working in a crime prevention role in Northern Ireland.

How SBD works in NI

Since April 2008, Registered Housing Associations seeking to undertake new build, major rehabilitation and re-improvement schemes – using Housing Association Grant (HAG) funding – are required to achieve SBD’s Award for physical security and layout and landscaping. HAG funding is when a payment is made to acquire land or buildings and to build, convert or improve housing for rent.

Achieving the SBD standard is a requirement of the Department for Communities (DfC), which took over the roles and responsibilities of the former Department for Social Development (DSD) in May 2016.

The DfC says the purpose is to reduce the opportunity for crime and fear of crime and to create a safer and more secure environment. “Designing to Secured by Design standards will be the norm unless it can be demonstrated that full compliance with these standards would not be commercially viable.”

DfC adds: “All schemes should be designed to be sensitive to their environment and contribute to good quality of life by ensuring they are safe and inclusive, well planned, constructed and maintained and offer equality of opportunity and services to all.”

The DOCOs will not sign off on SBD developments until they have been inspected and assessed as meeting the standards in accordance with SBD guidelines. This means that DfC funding to housing associations could be withheld until the SBD standard has been met – at a time when tenants are likely to be ready to move in. That’s a massive incentive for housing associations to achieve the SBD Award and for builders to comply with SBD requirements – a situation that doesn’t happen elsewhere in the UK.

The art of persuasion

Unlike in England and Wales where SBD is referenced in the planning process and in Approved Document Q and the Building Standards in Scotland, there is no such equivalent in Northern Ireland.

This means DOCOs use their specialist skills to encourage and persuade architects, designers and developers to understand the security and community safety benefits of including SBD in their projects. This involves sharing good practice and available evidence, such as crime reductions of up to 87% on new residential developments.

The DOCOs report that architects and developers in Northern Ireland are becoming increasingly interested in SBD and appreciative of the benefits of building in crime prevention measures and techniques whether they are involved with social housing or other projects. They understand the importance of security and safety and that more robust products, such as those accredited and listed by SBD on its website will last longer and mean less repairs and maintenance.

Once engaged, they are likely to be supportive. Typical queries coming through from architects include how to make drawing board plans or buildings already under construction SBD compliant. In addition, whenever DOCOs undertake site inspections, site managers and builders in general say that SBD developments are built to a far higher standard and quality than those in the private sector.

Shireen Fisher said: “We have not had comments or levels of interest like this before. So we are definitely making progress.”

The DOCOs in Northern Ireland have around 150 developments on-going at any particular time at various stages from concept to completion. Many will be in Belfast or Northern Ireland’s second city Londonderry/Derry whilst others are in other cities and towns and rural areas.

Developments of social housing could involve a short row of houses or a small estate of mixed houses and apartments creating two or three new streets on infill sites between established homes or where old homes have been demolished to make way for new ones. Neatly presented with smart, secure front doors and windows, mostly with living rooms that overlook front boundary railings and residents’ parked vehicles beyond, they additionally benefit from being well illuminated by lights to the front and rear of their property and modern street lighting. Some homes built on sites in potential policing problem areas may have specially heavy and thick glass fronted windows.

At the other end of the social housing scale are large phased developments, built over several years on greenfield sites for a number of different housing associations – creating brand new and emerging communities. Some developments run into thousands of homes.

As well as providing homes for families, DOCO work on social housing means catering for the elderly and people with disabilities and special needs, such as complex-needs bungalows and the provision of special facilities, such as wet rooms. Feedback is such that residents appreciate the quality and standard of buildings designed and built to SBD crime prevention standards. Requests to consider private housing developments remain rare in comparison.

Other DOCO work also involves building in security to hospitals and schools as well as places of work and relaxation like sports and leisure centres. Some are completely new developments, others involve new buildings on existing sites and refurbishing existing buildings.

Some of the DOCOs largest and longest-running projects have been in the health sector amounting to many hundreds of millions of pounds of building development. Key features here include secured entrances, access controls to buildings and lock-down shutters on doors and windows.

Other projects have included improving street security, such as the strategic use of bollards, improving park security by lowering perimeter fencing to provide greater visibility and a less fortified approach to a public space and enhancing the security of listed buildings with the use of internal panels of glass to achieve the added security provided by double-glazing.

Pete Connolly, who is a training consultant with SBD, said: “Many of these developments show SBD at its best. It’s about delivering thoughtful, safe designed homes for people to live in for generations to come. However, they are unlikely to ever be aware that the police had been involved in the development of their homes and in street design to make their local community safer.”

Kenny McHugh, who was the Lead Designing Out Crime Officer for PSNI from 2005 – 2016 before he left to work for SBD where he is Membership Lead, said: “It is great to see SBD continuing to grow and go from strength to strength.

“Over the last 15 years, I have been privileged to visit every corner of Northern Ireland to see at first hand how applying SBD crime prevention principles builds safer communities. It’s fantastic work and makes a difference to so many people’s lives.

“Not only does SBD help create secure surroundings, but also we help achieve secure homes and buildings with robust products like doors and windows that meet SBD’s Police Preferred Specification. Many of our local door and window manufacturers have become SBD member companies and have invested heavily in product testing and certification to ensure they meet our security standards.”

Kenny, whose strategic role now sees him working with PSNI, Police Scotland and An Garda Síochána, recalled that he once asked a clerk of works of a local housing association what his thoughts were about SBD. “He replied that whilst being sceptical to begin with, residents quickly started to say how happy they were with their new homes and how safe they felt. This led to a decline in residents requesting transfers to other areas.

“There were other benefits for housing associations too with reduced repair and maintenance costs because windows and doors had been tested and certified to ensure they were quality products. It’s a win, win for us all, he told me, with residents safer in their homes and in the communities that they live in – a testament to what working in partnership with SBD can achieve.”

Chris Sloan, of PSNI, said: “As a policing service we are committed to preventing crime and reducing harm through responsive, visible, accessible and victim-focused policing. By working in partnership with our stakeholders we can contribute to the development of safer spaces within Northern Ireland.

“Our continued investment in dedicated specialist Designing Out Crime Officers reinforces the PSNI commitment to designing out crime at a local and strategic level. The increases in architectural design requests including SBD on major, specialist and local developments are a clear indicator of the success and hard work of the prevention team.”