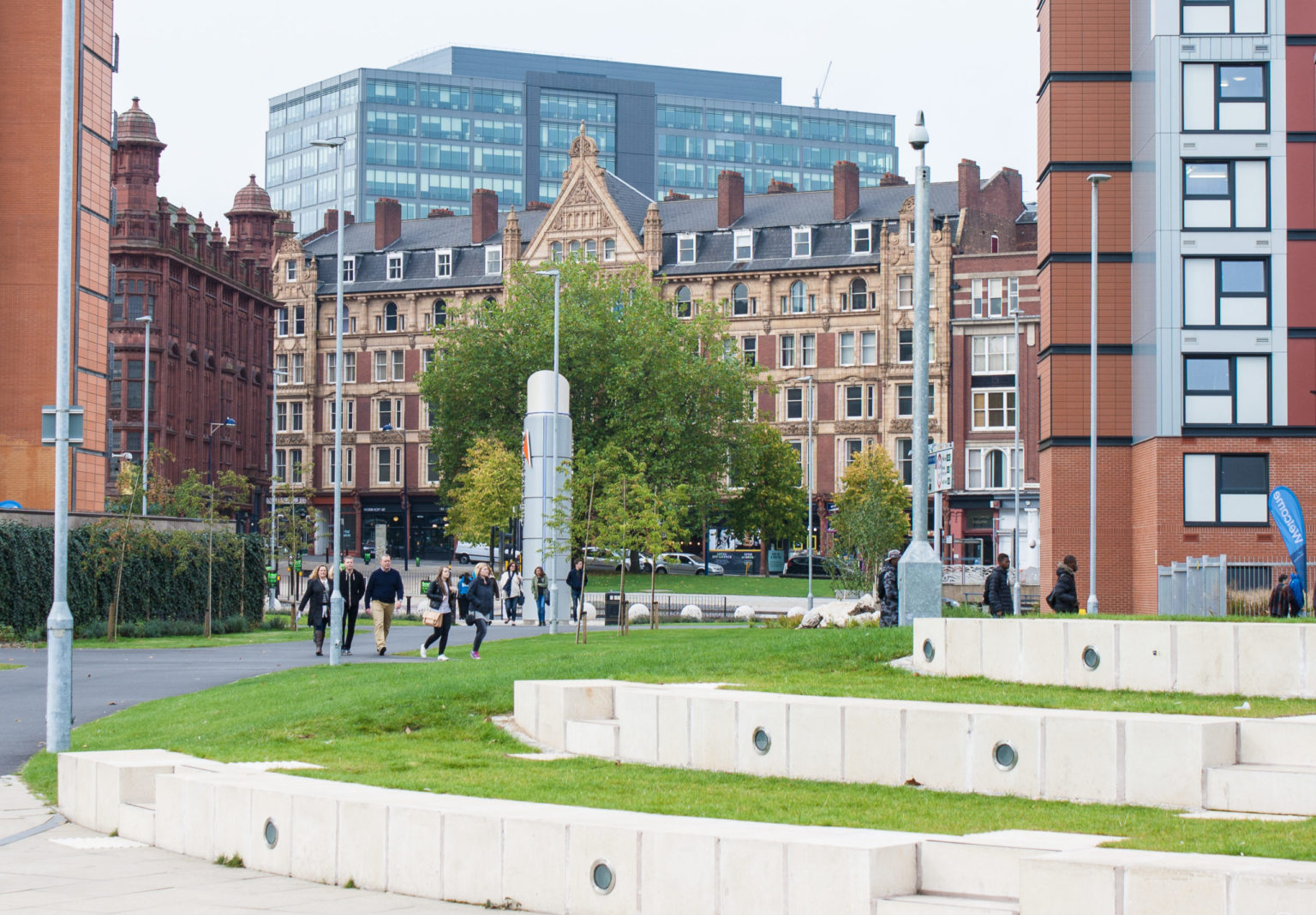 International Security Journal visited Aston University to find out how SafeZone is helping to improve security for staff and students.

The decision to enrol in higher education is becoming increasingly popular for young people once they leave school or college. A 2016 study by the University of Melbourne projected that the number of students attending universities around the world is expected to reach almost 600 million by 2040, growing at a rate of 4.2% every year.

However, keeping all these students safe on open campuses is no easy task. Highlighting the problems facing universities, a recent BBC investigation found that reports of rape, sexual assault and harassment at UK universities have trebled in three years.

Reports such as these have led many universities to explore the solutions on offer that are aimed at improving student safety. International Security Journal was invited to Aston University to view the brand new system that has been implemented there and the difference it is making to the lives of students.

Getting in the zone

Aston University was established in 1965 with its first Chancellor appointed in 1966, it currently has around 15,000 students and staff either studying or working on-site. Due to the constant potential threat of incidents on campus, the university executive team decided to look into how they could make the premises a safer space.

After investigating a range of products, the decision was made to install the SafeZone solution from CriticalArc. SafeZone is an all-in-one emergency and security management platform that enables security teams to respond as quickly as possible to individual or campus wide incidents. It is deployed at more than 25 universities in Europe and the UK as well as dozens more across the rest of the world.

It is a brilliantly innovative piece of technology with students and staff downloading an app to their smartphone with an emergency button which can be activated if the user is in need of assistance. In the security control room, the command team can see the exact location of anyone calling for help, plus the proximity and availability of responders – and the ability to track movements, real time, transforms their command and control capabilities.

Given the scope and importance of the deployment, the university brought in Duncan Laurance as IT Project Manager. Laurance explained that this was a particularly interesting project from the very beginning: “When I first came on board it was about a year after the initial idea of installing a product such as SafeZone had been floated so the executive team felt it was worth bringing in external resource to drive the implementation forwards.”

The main building on the campus is completely brick-built and provided the project team with the biggest challenge of the roll-out. Whilst possessing a certain rustic beauty, the building is notorious for having poor phone signal and Wi-Fi blackspots.

Laurance described how ongoing upgrades to the campus Wi-Fi have presented a possibility of a world-first: “The university was already carrying out a programme of Wi-Fi improvements and we thought this may be an ideal opportunity to improve the accuracy of the SafeZone app.

“We are working in partnership with CriticalArc and Cisco to deploy ‘hyper-location’ functionality which uses existing Wi-Fi nodes – as opposed to Bluetooth beacon technology – to provide location accuracy down to as near as one metre. This means we can pin-point an alert even where there is limited to no GSM/GPRS signal.”

What impact has it had?

Once the various technical challenges were overcome, the SafeZone solution was rolled out across campus in September 2019. A number of marketing initiatives were launched at the same time to promote awareness of the app and encourage students to download it.

The response was quite staggering as more than 500 downloads took place in the first two weeks of deployment with students recognising what a valuable asset SafeZone could be.

There are the obvious security and safety benefits, knowing that assistance is just one button away if a student is being attacked or harassed in any way. Past that, there are wider implications for student wellbeing.

Alison Levey, Director of Student and Academic Services at Aston University is delighted with the effect that SafeZone has had: “Campus safety is absolutely critical and the utmost priority to us. The Students Union is very happy with the app and I have heard no negative feedback at all. The app is not just about security, I think it helps the students feel connected and offers them reassurance.”

Universities across the country told the BBC they recorded 1,436 allegations of sexual harassment or sexual violence against students in 2018-19 – up from 476 in 2016-17. Although Aston University have been able to keep their numbers well below the national average, it proved they could not become complacent. Therefore as part of ongoing efforts to improve the community feel of the university, the project team worked closely with CriticalArc on product developments such as the “Report Something” feature. This will give users the opportunity to flag any non-violent situations – anonymously if preferred.

Levey continued: “The “Report Something” feature will be extremely valuable. Students can let us know about any mental health concerns that they are having themselves or they think a friend may be having. If we do not understand what is happening on campus then we cannot put the right services in place, data from the app will enable us to enhance the services we already have.”

Levey is certain that the app, in conjunction with the other advantages that the establishment has, will encourage undecided students to enrol at Aston.

Danny Malone, Technical Operations Manager at CriticalArc has been liaising with the project team throughout the installation and agrees with Levey’s optimism: “The app is not just about personal safety, it also makes people active bystanders. Each individual thinks they are “bulletproof” to a certain extent but SafeZone gives them the resource to help other people in distress.

“We have seen the great impact it has had at other institutions during emergency situations, such as a lecturer being taken ill in class, for example. By quickly activating the SafeZone app on a smartwatch, the student reported that the lecturer was clutching his chest to the security team and therefore the first responders came equipped with a defibrillator and saved his life. That is the power of SafeZone.”

The visit to Aston ended with an opportunity to take a tour of the university’s newly-refurbished control room and meet Caroline Bluck, the Acting Head of Security. Bluck and her team are at the forefront of campus security in the UK, helping Aston to become the first university in the country to gain the Surveillance Camera Commissioner Certification of Compliance.

The campus has approximately 600 CCTV cameras positioned on site as well as patrol officers having body worn cameras on their person. The security control room is resourced 24 hours a day.

Bluck revealed how SafeZone is helping the team to refine their security practices: “It is an extremely useful tool for us on a daily basis, it allows us to tie in our patrols with stakeholder locations as well as alter patrol routes if we think one particular area is getting neglected. The software is also an excellent training aid for our officers as it captures important data such as incident response times.”

The beginning of the academic year can often be a hectic period with the security team being called upon to assist with any number of incidents but Bluck stated that this year was “the smoothest ever” with SafeZone playing a key role: “The start of this academic year has been an incredible success.

“There were a number of initiatives introduced to help things run smoothly but SafeZone was a major player. I think it helped that staff were introduced to it first, saw the benefits it brings and then they helped to promote it to everyone else.”

Overall, Bluck couldn’t be happier with the performance of the product so far: “SafeZone is a quick, user friendly and efficient way of communication when it’s needed the most. In a fast paced world, we need to respond quickly. Not only to the physical threats, but to the panic of perception which can often be a far cry from reality.” The mass-notification capabilities help in such situations.

“It has helped to reassure the students that there is help available should they ever need it. The students can now feel part of the university community and concentrate on what they are here for; their studies.”

Looking ahead, there are ambitions within the SafeZone model for regional student safety.

The West Midlands area welcomes and accommodates a substantial student population in close and sometimes overlapping proximity. Discussions are underway with other universities to explore creating a city-wide SafeZone, ensuring student safety no matter what campus they may be visiting.

Of course, there is still some way to go before we see a deployment on this scale, but it shows the huge potential that SafeZone has. It has had a tremendous impact on the student experience at Aston University and there is no doubt that lots more universities will benefit from rolling out SafeZone in the years to come.