Exclusive: The challenges of protecting airports in a post-COVID world 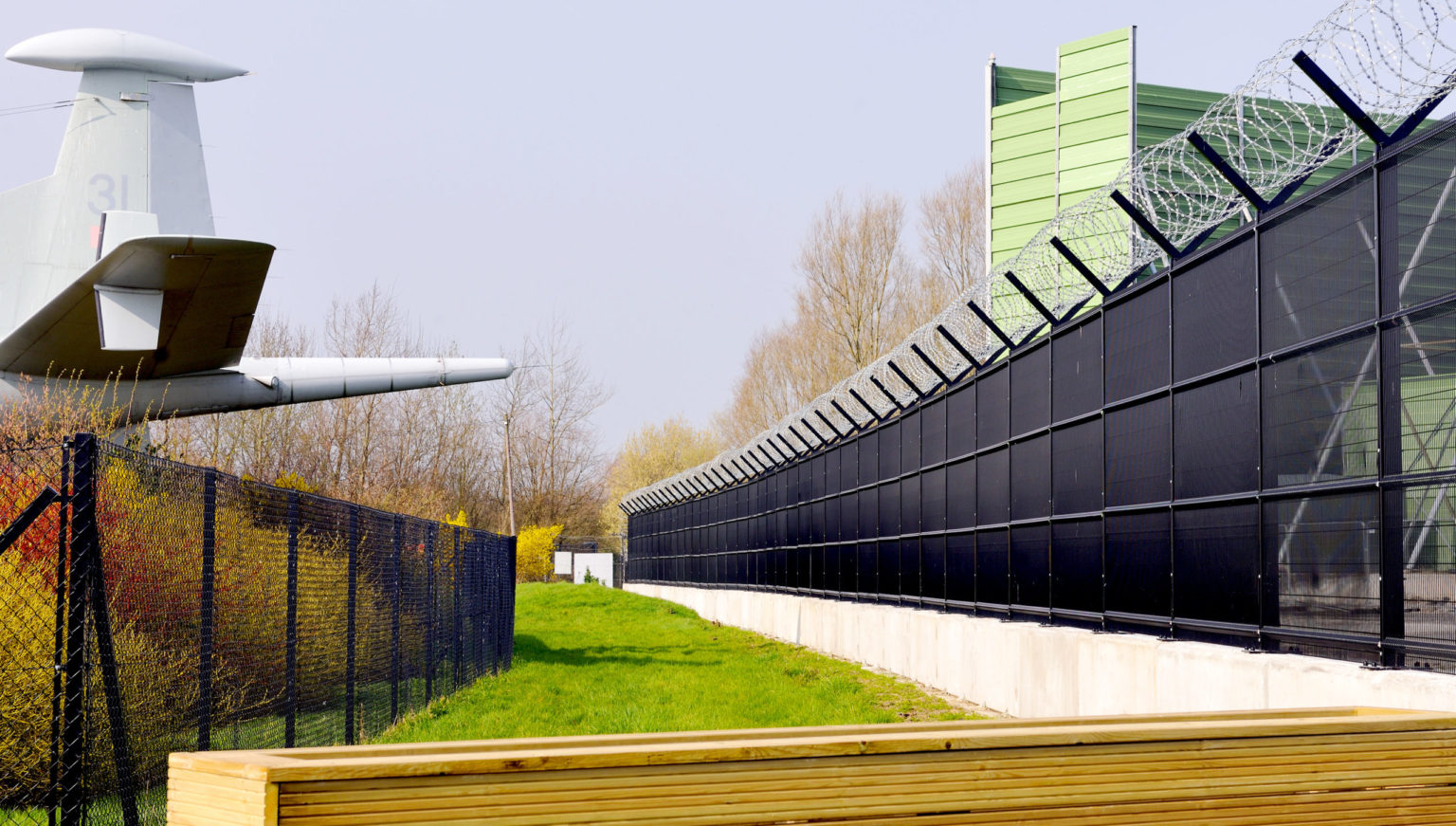 Stewart Plant, Director of Marketing at CLD Fencing Systems examines how airports can protect their future.

A new normal in aviation security across the world has become apparent as the world copes with the global pandemic caused by COVID-19. With airlines reportedly having to suspend flights, airframes being retired for commercial reasons and the worst fall in travel since World War 2. Stewart Plant, Director of Marketing at CLD Fencing Systems looks at how airports can protect their future in a post-COVID world.

With so many assets grounded, eyes turn to the physical perimeter of these airports. Whilst for many years the focus has been on the threat of terrorism; this also now needs to include theft and mischief. One of the biggest problems with perimeter protection, when it comes to fencing and gate access is the use of chain link. Transportation Security Administration (TSA) states in their 2011 manual, Recommended Security Guidelines for Airport Planning, Design and Construction that: “Chain link fencing is the most common type of fencing and is often the most cost-effective solution when deterrence, as opposed to prevention of forced entry, is the prime security objective.”

The key part of that statement are the words ‘deterrent over prevention’. Chain link fencing is one of the quickest to breach permanent fencing solutions in the marketplace. However, in this day and age it offers neither a deterrent nor prevention to a would-be intruder.

The Building Research Establishment (BRE) group who hosts the Loss Prevention Certification Board (LPCB), are a UK-based organisation responsible for technical approvals and testing of products under the Building Regulations, Construction Products Directive and other European legislation. In 2017, they carried out a series of live security tests, which included various fencing systems to British Standards 1722 and assessed them against their world standard in security testing LPS 75, ‘Requirements and Testing Procedures for the LPCB Approval and Listing of Burglary Resistant Building Components, Strongpoints and Security Enclosures’.

In a test of a chain link fence manufactured and installed to BS 1722-10, they were able to create an entry area for a person in 15.92 seconds. This is the exact same fencing system recommended for use at airports around the globe. In a direct comparison, it took almost seven seconds alone for them to be able to cut a single wire on a profiled rigid weld mesh panel system that is rated to LPS1175 SR1.

When comparing the wire thickness of the two systems, chain link uses a 3.55mm (0.139in) wire diameter, whereas the rigid weld mesh was manufactured with 6mm (0.236in) wires on the horizontal and verticals. This equates to an increase of almost 300% of the cross-section area with regards to steel content between the two systems. Furthermore, this created a 981.25% increase in the time taken to fracture a single wire using standard wire snips.

Standards such as BS 1722, American Iron and Steel Institute (AISI) or American Society for Testing and Materials (ASTM) ratings advise the basic manufacturing, supply and installation specifications of a fencing system. At no stage will any of these standards guarantee a minimum delay time under attack from a dedicated tool set. However, these are often the only standards that are specified for the fencing and gate access systems at airports.

In contrast, LPS 1175 approved products will have been put through rigorous physical testing. At the same time, all aspects of the fencing system are reverse-engineered to ascertain the weakest attack points of the product in laboratory conditions.

Offering different levels of minimum attack delay, these include the following certified standards: LPS 1175 A1 (SR1), which holds a 60 second attack delay against opportunist attack by bodily physical force and stealth using minimal tools; and LPS 1175 B3 (SR2), providing a 180 second delay against attack from a determined opportunist attack by bodily physical force using tools with a high mechanical advantage.

What is vital with both of these standards is the ability for the security forces to plan their manned response when a breach is attempted. With a three-minute delay on a LPS 1175 B3 (SR2) and five-minutes on an LPS 1175 C5 (SR3) approved system, manned patrols have the time to deploy to prevent entry onto the estate at the exact access point. This prevents the potential of losing the intruder in a busy airfield. When prevention – as opposed to deterrence – is the key aim of physical perimeter security, the adoption of a world class standard and the emphasis of worth (over cost) should be the priorities.

As previously discussed, the adoption of a world standard in security, such as LPS 1175, allows a longer response time to counter physical attacks with tools. However, this is not the only method of penetration. The use of vehicles in attacks, both terror and non-terror related, are a major concern to airports.

The number of perimeter breaches where a vehicle is used to penetrate the fence line or access gates is increasing year-on-year. Whilst the majority of these are carried out by an individual who is disorientated, intoxicated or delusional, the fact remains that an uncontrolled vehicle airside presents both a major security risk and a danger to personnel and assets.

When designing the upgraded perimeter at Manchester International Airport, planners needed to look at how best practice could be used not only to prevent unauthorised pedestrian entry, but also vehicular access to sensitive areas. Systems were adopted that featured a profiled LPS 1175 SR1 Rigid Mesh System that could be installed in three ways:

By working across various installation methods, Manchester Airport Group (MAG) were able to design a perimeter that would offer a significant delay against any attempted perimeter breach whilst also being adaptable. Also, aesthetically, the use of the same fencing system around the entire perimeter presented a streamlined, modern appearance, while also providing multi-threat protection abilities.

The second best practice is removing or reducing the ability to scale the fence. By adopting a smaller mesh aperture, one creates a surface that is harder to climb. MAG adopted a 25mm wide aperture instead of the standard 50mm that is presented with chain link. In doing so, the area used as potential hand- and footholds was reduced by a half.

Profiled fencing systems also present an additional obstacle as you lose a foothold due to the reduction in overall aperture. As you near the top of the fence, or when using a ladder or vehicle, the addition of a security topping system is the final barrier to scaling.

Barbed wire-topped fences have been the staple of airports for many years, either installed using straight extensions or Y-cranks with 45-degree returns on both sides. The problem with barbed wire alone is it actually offers a hand hold system and once scaled can be used to stand on. MAG looked at how they could use this system but improve upon it to create a further delay to an intruder.

The addition of razor coil tape inside the Y-crank, or the use of a T-crank system with 90-degree returns means that there is an increased snag area for clothing and skin on any interaction with the coil. You are no longer able to use the barbed wire as a foot hold as the coil will be in a position where it may wrap around your feet. By having to take increased time to scale through these systems it allows considerably more time to detect and respond to a potential perimeter breach.

Lastly, if an intruder can’t go through or over a fence line, best practice dictates that you must take all actions, where ground conditions require it, to prevent burrowing. This can be achieved by a variety of means but employ the same overall method.

By using a fencing system that is rigid and extends at least 300mm (11.81in) below the ground level, you create a below-ground barrier that cannot be raised and only major excavation of the surrounding soil would allow access.

The trench that is dug also has post holes at every post centre. This presents the base of the fence 300mm below the ground level. This trench can either be filled with soil or concrete for a more permanent sill. With rigid fencing systems, the ability to lift the fencing out of the sill is removed.

This system of installation creates a large delay time for a burrowing attack; simply moving the topsoil and squeezing under the fence is no longer an option.

The adoption of these three best practices helps to create a physical perimeter protection system that is designed not only to delay an attack for a known time allowing a manned response after detection, but also presents a hard target.

If your fence line and access gates look like they can be scaled, cut through or burrowed under then the opportunist will take the chance. However, if it looks like it will present a major delay and offer an increased chance of detection and response, the number of attacks upon it will decrease.

As systems develop and requirements change, the marketplace must move with them. Already we are starting to see an increase in the requirements of frangible glass reinforced plastic (GRP) fencing to form a demarcation line within areas not commonly associated with metal fencing products.

GRP fencing provides radio transparency and operational use of it on an active airside will also match the security requirements of internal staff being excluded from areas of high traffic usage. With a growth in flights – and staff to support them – airports are becoming busier and busier. Internal demarcation is becoming just as important as external perimeter protection.

We sadly live in a world where our security measures are never going to decrease. However, not increasing them in line with requirements and reviewing new and existing physical perimeter products (in the same way we do surveillance and detection systems) would be a mistake.

Adoption of stringent tested security standards with guaranteed delay times forms the base of a new pyramid of physical perimeter security. By starting with a fence line that provides these aspects you are placing worth above cost. The question that should be asked is not which is the cheapest system, but which system will provide the greatest level of delay and what would be the cost if it doesn’t delay an attack.

It only takes one major incident with loss of life or assets to make us question how it was ‘allowed’ to happen. In this post-COVID world, isn’t it time for you to have a physical perimeter protection system that is proactive at preventing intruders?

This article was published in the August 2020 edition of International Security Journal. Pick up your FREE digital copy on the link here