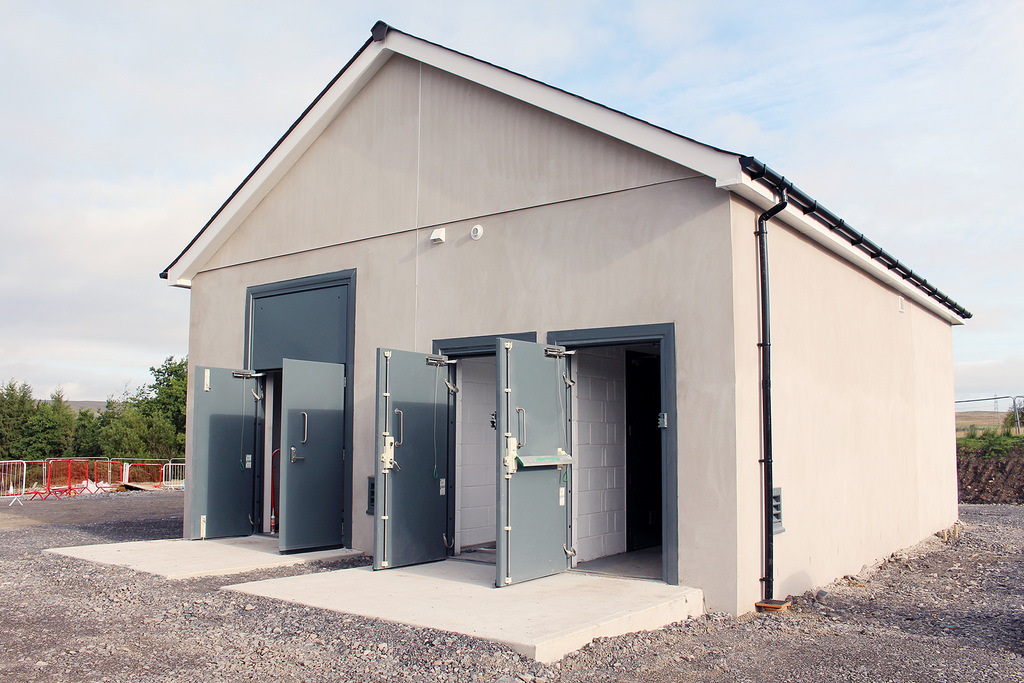 Effective investment in physical security means buying into the ‘science of delay’, as Terry Batten of Technocover explains.

‘Detect, delay, respond’ is the foundation for implementing dependable systems of asset security to protect against unauthorised entry using force.

Effective physical security is ultimately an investment in time; that is, procuring engineered protection that will sufficiently delay attempts at physical infiltration by hostile assailants until first responders arrive.

Security provision for most types of sites and sectors is based on the principle of layered defences, like the skins of an onion; delaying or deterring the physical strategies used by criminals, terrorists and saboteurs to force entry into areas with critical or valuable assets.

Security measures such as perimeter fences, CCTV and guard control are important deterrents to the progress of an intruder on an operational site. But ultimately, the physical resistance of doors, enclosures, cages, cabinets, access covers and associated equipment will be the last line of defence of critical equipment from a determined attacker with heavy duty tools.

When it comes to resisting the range of risks of forced entry posed by today’s increasingly sophisticated criminals and terrorists, how can we be sure of the performance of security equipment if attacked? Would it guarantee the time/delay needed to thwart the severity of the tools and efforts employed by a hostile perpetrator or gang?

LPS 1175, the test standard used for LPCB certification, considers the resistance of security equipment to forced entry based on the size and type of tools used and the time that assailants will risk spending on the attack. In accounting for these varying parameters, physical security products are tested and rated to LPS 1175 according to the delay they provide against different levels of forced entry.

The standard assumes that intruders have full knowledge of the security product and are willing to make proportionate efforts in attacking it; the lower the risk of failure in overcoming the physical barrier and the greater the value of the prize, the more likely they are to invest in the act. That investment could be in time and effort gathering intelligence about the target, planning the attack, obtaining the tools required and preparing their fitness and skills.

The delay provided by physical security measures must at least match the time required to detect the attempted intrusion and respond to that detection in order to detain the intruder.

Of the various mechanisms of attack – including cyber, bladed weapon, explosives, CBR – hand tools are often viewed as less significant, even though the impacts can still be substantial and devastating. Attacks on electricity substations, for example, through vandalism or to steal metal, can result in costly damage to property and disruption to the supply network. Loss of life of the trespasser through electrocution could also occur or even greater human loss and injury; for example, if stolen cable is left on a railway line leading to a train derailment.

Forced entry protection requires security measures that will delay the intruder/s to allow detection and a response to be raised. If you do not invest sufficiently and with certainty in delay measures, this will increase the ‘exploitable gap’ in site security. The delay provided by the protection you install, which may comprise a combination of physical deterrents and barriers, will be critical, but what claims can you trust?

As a Loss Prevention Standard, LPS 1175 historically grew around the needs of the insurance industry for which it remains a trusted and often preferred marque of third party approval. Together with its growing adoption, if not specification, for many areas of critical national infrastructure, the standard continues to grow in relevance by being sensitive to the broadest range of risks to assets and property encountered day-to-day.

Threats are constantly evolving, as the COVID-19 pandemic has shown, prompting much discussion within the security industry about the impacts. Some are concerned that social isolation from lockdown and unemployment may leave more people vulnerable to the influence of subversive groups or radicalisation that could lead to terrorist or criminal activity. Some speculate that COVID-19 will heighten the potential use of pathogen, toxin and radiological material by terrorists. There is a consensus that investment in the security of critical assets should be maintained as much as possible.

Certainly, the Protect strand of CONTEST (the UK’s Strategy for Countering Terrorism, June 2018) reinforced the importance of strengthening protection against terror attacks. These include continued investment in security and resilience across the UK’s transport network and other parts of critical national infrastructure (CNI) which keep the country running and provide essential services. There is also emphasis on enhancing capabilities to detect terrorist activity involving Chemical, Biological, Radiological, Nuclear and Explosives (CBRNE) material and their precursors, including the control and safeguarding of such substances.

The threat levels and attack tools that define the security rating (SR) categories in LPS 1175 reflect the latest advice from the UK government, CPNI and NACTSO, plus other security-focused organisations representing different industries and sectors.

Shifts in the risk landscape are captured in revisions to LPS 1175. The composition of tool kits, which reflect tools principally used in construction and demolition, was key to the recent Issue 8 update (January 2019). This now defines a wider range of risk levels in terms of attack tools and measured resistance time, ensuring that the standard continues to provide the same confidence.

Any update of the LPS 1175 standard is a test of the commitment, technical ability and resources of LPCB manufacturers wishing to maintain their range at the forefront of choice. Technocover has made a substantial investment of time and money since it submitted its very first LPCB product back in 1999 – an upstand reservoir access cover that remains a staple of the water industry.

The company recognised that LPCB’s rigorous third party regime would provide the demonstrable assurance of system performance to support its ambitions to be an authority and technical leader in physical security.

Technocover’s 20+ years of working to the rigorous benchmark of LPS 1175 has helped the business to perfect the ‘science of delay’ through its many different high security solutions achieved within LPCB certification.

An overarching strength of LPCB as a performance standard is that it gives manufacturers scope to innovate. There is no design blueprint, for example, for a LPCB SR4 high security door; certification is about meeting the time threshold of the performance test, leaving designers with licence to tailor and differentiate products to add value and provide the individual functionality required by different sectors.

In addition, unlike a one-off test, LPCB certification provides an assurance of reproducible performance. On-going audit of the manufacturer’s production processes and systems ensures that the products placed on the market continue to deliver the certified performance.

While LPCB vouches for the dependability of those systems certified under its marque, the ongoing diversification and proliferation of LPS 1175 products on the market is largely down to innovative collaboration between clients and manufacturers.

The ability to bring certified products to market relies on the experience and ingenuity of individual manufacturers. Technocover sits on a cache of expertise and successfully tested designs that simplify its ability to originate a new LPCB certified product or adapt an existing modular system within the scope of certification. This level of insight is crucial given that 95% of products submitted to LPS 1175 testing fail. The company’s latest is an upstand emergency escape hatch for use over access chambers, tested and certified to LPS 1175: Issue 8, Security Rating 4 (D10).

LPCB manufacturers can also employ different approaches to structural design and fabrication. Technocover has evolved a combination of structural steelplate, strengthening strategies, fabrication quality and post-galvanised protection that can be readily configured for LPS 1175 test compliance. The integrity of its steel engineering is borne out by the instances of products developed for a specific security rating actually meeting the performance criteria for the next class of risk during testing.

The structural potential of designs can be scoped out and assessed to some extent using CAD and applications such as Finite Element Analysis (FEA). This is helpful in assessing the feasibility of different steel element configurations during concept work, offering the opportunity to sample from previous designs and model the dynamic impacts. However, the structural behaviour of a fabrication will change at every point in terms of flexing and bending under applied load. So, while useful, FEA can only indicate that a particular solution will be close to meeting the required structural performance. Only testing can provide the ultimate confirmation that a product will provide the resistance – measured in time – to a particular threat.

As physical security tightens across all sectors in the face of heightened global terror threats and more local crime risks, growing demand is being seen for more complex, versatile and functional solutions. A trend is emerging for large-scale enclosures and cages to secure groups of critical assets and for bespoke products to bring refurbished buildings, extensions or re-appropriated space in line with security standards.

This evolving sophistication cannot always be effectively met by cherry picking off-the-shelf security products. Invariably it will require the early involvement of experienced manufacturers whose security engineering can push both the spatial and operational envelope while remaining within the scope of third party approval.

Technocover builds many contingencies into the UltraSecure product designs that it submits to LPS 1175 performance tests. Options such as louvre venting, vision panels and special anchoring systems provide essential flexibility to adapt solutions to varying and unpredictable constructional and operational needs, while fulfilling the required LPCB security rating.

The design modularity permitted by LPCB certification allows secure kiosks and mesh enclosures to be scaled up to large sizes and configured to unusual footprints, roof layouts or lean-to applications. This also facilitates offsite construction of kiosks pre-fitted with M&E services, which can be craned in to reduce asset downtime and site congestion. Mesh cages are growing in demand, providing free airflow and visibility of plant and infrastructure, while protecting against malicious attack.

This tailored approach can help security teams to better manage operational change to maintain compliance with security and health and safety standards and procedures. Solutions will also need to be carefully integrated with adopted security technologies, including compatible certified locking, access control, alarms and CCTV.

Ultimately, Technocover’s approach considers the Whole Life Cost of security, factoring in operational, safety and durability factors to deliver lowest total cost while achieving LPCB-assured performance in ‘delay engineering’ gauged to the specific threat. In identifying physical security that can be relied on to provide predictable performance when under attack, this offers the very best return on the client’s investment.

As a standard that can be freely viewed and specified, LPS 1175 is a security assurance that travels well; it is being adopted for projects around the globe up to government-approved level. Technocover as a company has supplied LPCB approved products to rail, energy and water projects in France as well as for utilities sites in the Middle East.

While cybersecurity and the latest in digital surveillance often grab the headlines, the role of physical security – the structural hardening of assets – continues to provide the backbone to operational resilience and continuity.

Topically, COVID-19 has highlighted the importance of keeping essential utilities like power, water and telecommunications working smoothly to ensure hospitals can provide life-critical care and people can be sustained safely in their homes during lockdown.

Often standing as the final barrier protecting a critical asset or restricted area, physical security ‘buys the time’ needed to foil an attack and apprehend the attackers. Asset owners and operators should ensure that the engineered security shielding their operations has the testing and credentials behind it to tough it out, should risk become reality.

This article was originally published in the June 2020 edition of International Security Journal. Pick up your FREE digital copy on the link here