Security according to BRE makes its way to Central Europe 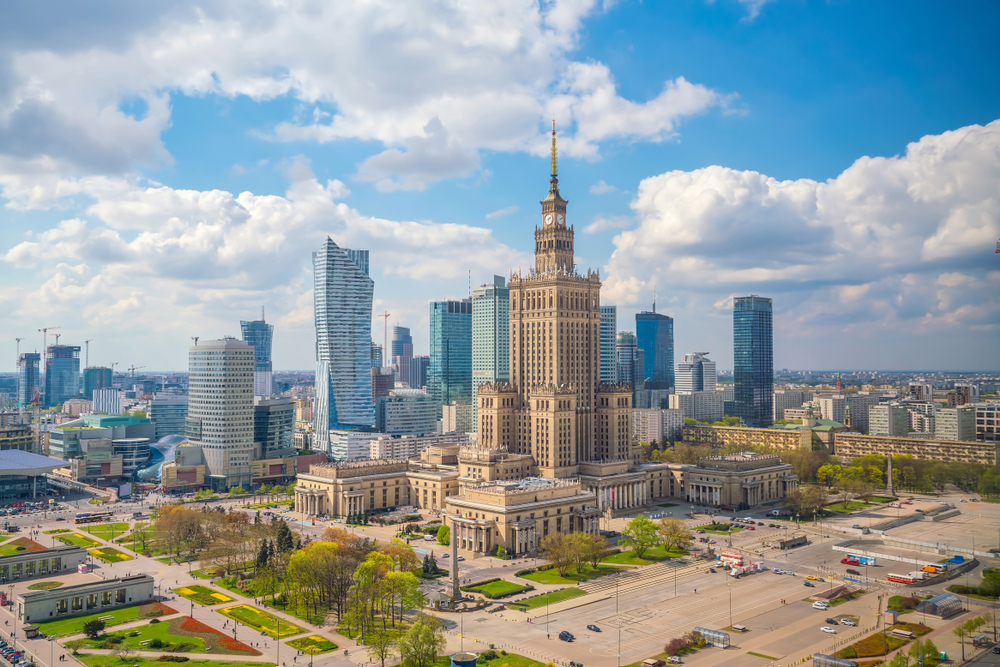 CPTED-UK has delivered the first security risk assessment under the Building Research Establishment Environmental Assessment Methodology (BREEAM) scheme in Central and Eastern Europe. The carbon footprint generated by crime is significant for the real estate and security became a widely recognised sustainability criteria. British security specialists from CPTED-UK have applied their expertise to improve the sustainability rating of a popular Office Park in Poland. This B2B partnership has been supported by the UK’s Department for International Trade (DIT) who help businesses export and grow into global markets.

CPTED-UK made an ideal contractor for the delivery of this service with Poland being a home country for one of the directors. Boguslawa Motylska, aka Baxi has graduated from the University of Silesia in Poland with a MSc degree in Political Sciences. She has strong family traditions in the armed forces and has worked for the Polish Police. She was the first Polish citizen appointed as a Police Designing out Crime Officer in the United Kingdom providing advice to local authority planning departments, property developers and architects on design proposals and its potential impact on crime and disorder and the fear of crime. Baxi is a Member of the Security Institute and has recently been appointed to the British Design Council representing the security industry as an Expert.

Baxi said: “Working on the first security risk assessment in Poland was a challenge even for me, a Polish national with experience from the Police Forces in Poland and in the UK. The continental legal system is fundamentally different to common law and my knowledge of the country’s administrative structures turned out to be invaluable.

“It was an even greater pleasure to apply my skills and knowledge acquired in the UK over the last 15 years back home. Both countries have a lot to offer and working on this project allowed us to congregate different perspectives and exploit the best practice from the Polish real estate and the British security sectors. We made every effort to ensure the highest level of quality and customer satisfaction and we found this collaboration extremely rewarding.”

The Department for International Trade (DIT) has been working with CPTED-UK over the past year on developing business relationships between the company and its potential partners overseas. With their network of trade advisers based in over 100 countries across the world, DIT were able to identify key contacts in Central and Eastern Europe (CEE). Once introductions were made, DIT overseas International Trade advisers created the opportunity for CPTED to present their offer, expertise and vision of how they could add value to overseas markets and communities.

Whilst the United Kingdom has the most advanced system of CPTED implementation in Europe with its many policy strands that relate to urban planning and crime prevention, security and social value in real estate is innovative in the CEE. The support received from DIT was invaluable for CPTED-UK in identifying and facilitating the engagement with potential delivery partners and establish long term strategic partnerships to facilitate the transfer of innovation and exchange of good practice between the UK and the EU member states.

The Office Park in Poland aimed to upgrade its BREEAM rating to Excellent and the security risk assessment by CPTED-UK awarded them the additional credits necessary to achieve this. With a strong global focus on the green agenda sustainability became a key consideration for property investors. BREEAM is the most advanced system used to demonstrate that an asset is environmentally friendly. The Building Research Establishment (BRE) have been developing its assessment methodology since early 90s and over the years it has become a symbol of sustainability in real estate. Its categories traditionally evaluate energy and water use, health and wellbeing, pollution, transport, materials, waste, ecology and management processes.

The Property Management of the park leases the office space long term, predominantly to international corporations from the finance, IT and pharmaceutical sectors, where data security is crucial for business continuity. The Heads of Security and Loss Prevention in high-profile corporations often rely on independent third-party security certification. Each country has its own set of standards and the most reliable way to ensure consistency is through a globally recognised scheme such as BREEAM or SABRE.

SABRE is the first scheme by BRE entirely dedicated to security at an asset level. It was first introduced in 2017 after the security area of BREEAM has been increasingly appreciated by the property investors and tenants for many years. SABRE provides industry with a framework that can be used during the design, construction and operation of assets. It allows organisations to evidence their commitment to security and communicate their ability to manage security risks.

Gareth Hulmes, the Head of SABRE at BRE Global, said: “SABRE (Security Assurance by BRE) was introduced following fundamental scientific research which identified the need for a common, international framework capable of enabling asset owners, occupiers, investors and developers to measure, compare and improve the security performance of their built assets. SABRE is risk-based and linked to the user organisation’s broader goals and as such helps stakeholders understand the value that security investment brings to their operations and mission. It’s also useful for communicating an organisation’s commitment to security and evidencing that the full spectrum of applicable security risks (whether they be rooted in crime, terrorism, or other) are mitigated to an appropriate and proportionate degree. SABRE is a global standard and delivered by independent SABRE Registered Assessors, whose assessments lead to 3rd party certification. This represents formal confirmation that a facility has been successfully assessed against the standard’s requirements.”

In addition to improved BREEAM rating the security risk assessment added value to the company’s ESG report that evaluates the environmental, social and governance criteria. ESG is a set of standards for a company’s operations that socially conscious investors use to screen potential investments. Security always features in the ESG assessment frameworks allowing companies to demonstrate that their working conditions show high regard for the safety and security of its employees and other stakeholders.

BRE have introduced security to the most recent version of the BREEAM In-Use International scheme published in 2019. Security forms part of the scheme under the resilience and applies to the asset management. The scheme recognises that the traditional approaches to security can often result in inequitable and exclusionary outcomes.

Crime Prevention through Environmental Design (CPTED) as a discipline encourages policies and procedures that protect buildings users and at the same time contribute to the dignity, safety and security of the wider community. The recently published ISO 22341: 2021 standard for CPTED officially recognises the value of such approach. The social strategies, defined by the ISO as CPTED 2nd generation and the more traditional CPTED strategies are interdependent and complement each other.

In addition to the Security Risk Assessment CPTED-UK have also evaluated the Social Risks and Opportunities for the Office Park in Poland. The social value of the built environment is another relatively new criteria in the BREEAM International. Its inclusion into the latest version of the BREEAM In-Use scheme coincides with the publication of the first ISO standard for CPTED. It is an important milestone in the development of a more comprehensive approach to the security of public places.

Built environment security is not routinely applied in Poland and the concept of CPTED is not commonly understood. The European Union often refers to CPTED as ‘security by design’ when addressing security from the very beginning of the planning and design stages but it’s the United Kingdom that has the most advanced system of incorporating security into the environmental design in Europe.

The advantage of CPTED over the traditional physical and technological approach to security becomes obvious when compared with ad-hoc solutions added retrospectively. Crime reduction measures that are conceived from the initial stages of the design process are less likely to conflict with existing services and utilities. They integrate better with other features and blend harmoniously with the surrounding environment.

Although the approach to crime prevention varies between the two countries, the environmental and social causes of crime are known to be consistent across all cultures. Therefore the situational crime prevention good practice is often transferrable.

Baxi said: “Poland recognises the neo-imperial policy of the authorities of the Russian Federation as the most serious threat and is aware of the multi-faceted and comprehensive actions using non-military means such as cyber-attacks against the state and non-state actors. Whilst preventative strategies focus on critical national infrastructure and public administration it was disappointing to see that the private sector has no choice but to address the threat by its own means.

“It wasn’t a surprise that the digital threat profile in Poland is no different to what we see in the UK. Cybercrime is a global threat and telecommunication security breaches are on the increase like in every other country. The number of incidents in Poland reached unprecedented heights in 2019. Suspicious activity within the public administration and government networks accounts for vast majority of those breaches. Viruses accounted for majority of the reported incidents for several consecutive years and the most prominent trend is a sharp increase in the number of phishing incidents.

“What didn’t surprise us was the lack of recording systems for the cybersecurity incidents. The Office Park management were not aware of any reporting mechanisms for such offences so there was very little data to inform the risk assessment or to use for alerting and informing others. The company applied a multitude of instructions to mitigate the risk of natural and manmade hazards but the digital threat didn’t feature in any of them.”

Richard Stones OBE, Director of CPTED-UK said: “The security risk assessment process identified areas for improvement that cannot be addressed effectively without the board level support. The responsibility for business security strategy needs to be clearly defined within the company’s structure. The reputational damage resulting from a potential cyber-attack needs to be understood so a suitable response can be prepared and tested in advance.

“A positive approach to security and risk management is a marketable commodity in the same way as other products and services. A rigorous top-down approach to security instils confidence in tenants, who by virtue of their global presence are exposed to all manner of security threats.”

Richard dedicated his police career to bridging the gap between the public and private sector and has been awarded the OBE in the Queen’s Birthday Honour’s List for his role in helping to reduce business crime. Richard had a defining role with the National Business Crime Forum a major output being the development of the not-for-profit National Business Crime Solution. Richard’s business crime and loss prevention expertise allowed the Office Park in Poland to identify the areas of vulnerability and develop effective mechanisms of mitigating the risk.