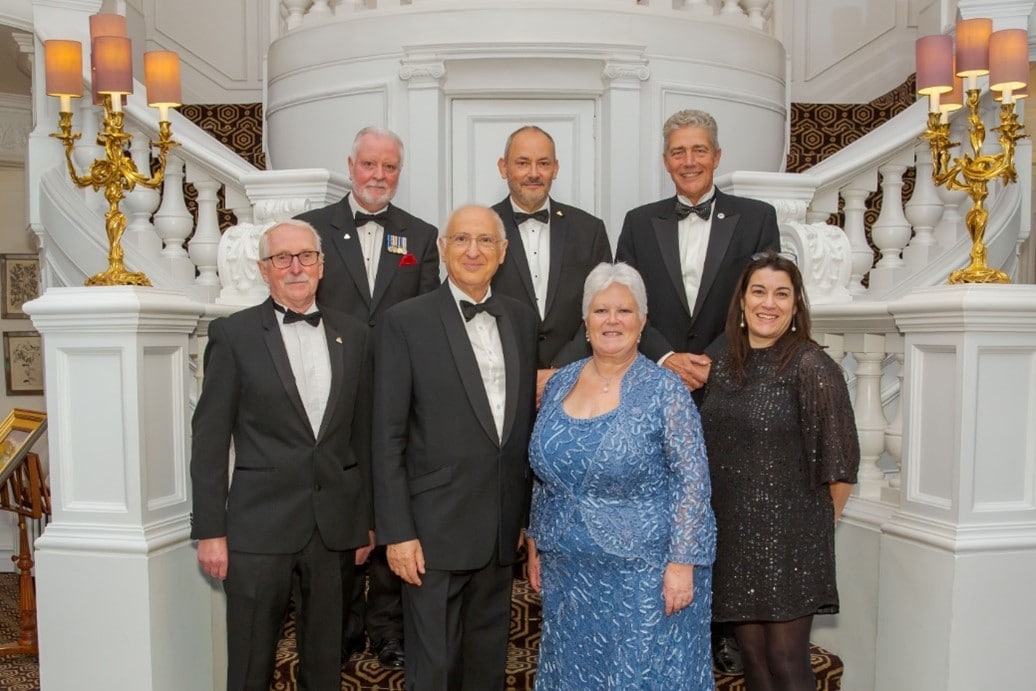 After a dynamic year of recruitment, the Register of Chartered Security Professionals held its delayed annual celebratory dinner on 27 September at the historic St. Ermin’s Hotel, attended by over 80 CSyPs and their guests and hosted by Lord Carlile of Berriew CBE QC.

Not only was it a celebration of the new Chartered Security Professionals admitted since April 2020, but there was also special recognition as the Register has been in existence for ten successful years. Paying tribute to this, Lord Carlile referred to its continuing success and to the impact Chartered Security Professionals, both as individuals and as a dynamic professional register, are making. The original Project Teams and Working Groups had done their jobs well, he said, as the standards remained relevant and correct ten years after launch. As a mark of recognition, Baroness Henig of Lancaster CBE DL, the current Chair of the Registration Authority who was unable to attend in person, had issued special ten-year commemorative certificates and lapel pins which were presented to Mike Bluestone CSyP, David Gill CSyP, Angus Darroch-Warren CSyP, Garry Evanson CSyP and Kevin Blythe CSyP.

Guests attending included three returning sponsors – Dallmeier electronic UK, Nineteen Events and Bidvest Noonan – alongside representatives of the Worshipful Company of Security Professionals, the Security Institute and ASIS UK Chapter 208. All three organisations collaborate to drive awareness of the highest standards represented by those who are chartered and each actively continue to contribute to the Register’s success.

The guest speaker for the evening was Deputy Chief Constable Jane Gyford of Cambridgeshire Constabulary, who spoke on the growth of professionalism in policing and security, paying tribute to the commitment of the Register to encourage applications from under-represented groups in order to provide a better, more rounded, diverse and inclusive standard for all.

Since its launch in 2011 there have been 381 applications with 226 being successfully admitted. Whilst the majority are based in the UK, there are now also CSyPs in Czechia, Albania, Australia, Canada, China, Cote d’Ivoire, France, Hong Kong, New Zealand, Nigeria, Norway, Oman, Panama, Romania, Saudi Arabia, Spain, Switzerland, The Netherlands, the UAE and the USA. Before the start of the formal dinner, 34 new CSyPs were presented with their certificates of admittance on the magnificent grand staircase of the hotel by Lord Carlile of Berriew CBE QC, Patron of the Register of Chartered Security Professionals. As ever there was an amazing atmosphere and the sheer variety, influence and reach of the 2020/21 cohort was astonishing, representing UK Government departments and the armed forces and companies including Associated British Ports, National Nuclear Laboratory, Sodexo, Sky News, PwC and a myriad of highly qualified independent security consultants and security service providers.

During the dinner, Don Randall MBE CSyP presented Di Thomas with a commemorative plaque on behalf of the Register. Di has been the RCSP Administration Manager since its inception and will be stepping down from this role at the end of October.

Earlier in the afternoon, CSyPs had held a Conference to debate how best to develop career pathways to encourage diversity in the security industry from cradle to grave. Conference compere Rick Moufield CSyP invited a specially selected panel comprising Paul Barnard CSyP, Enyioma Annaba, Dawn Holmes CSyP, Garry Evanson CSyP and Mahbubul Islam CSyP to share their own experiences. After this, the newly appointed CEO of the UK Cyber Security Council, Simon Hepburn, talked about his approach to providing equal opportunities for career progression. Both sessions led to lively roundtable debates and ideas to support future development, the conference itself providing an opportunity for CSyPs to catch up with each other at long last, whilst paving the way for further discussion and action.