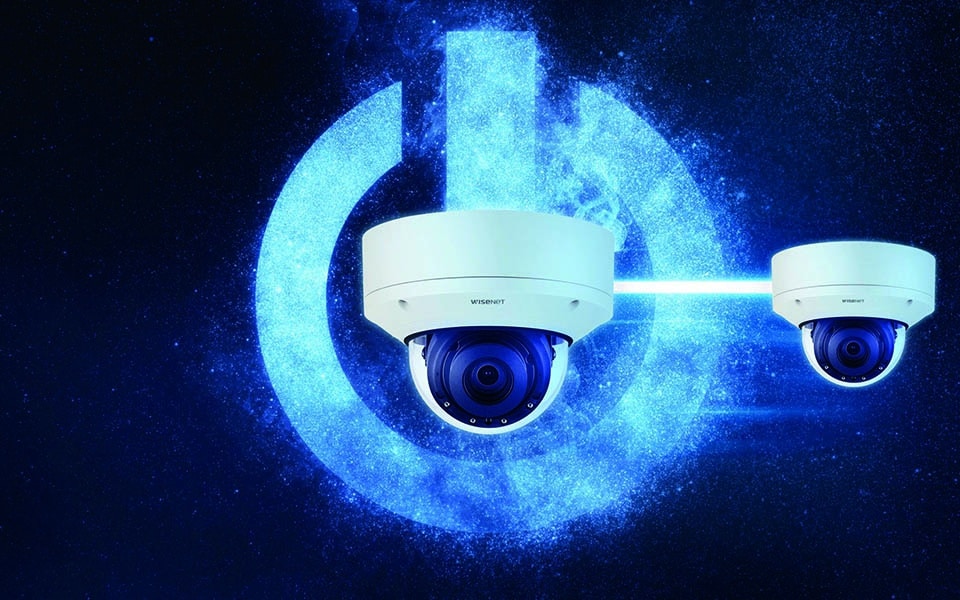 Uri Guterman, Head of Product & Marketing for Hanwha Techwin Europe provides an overview of the benefits of PoE, as well as offering an explanation of the terminology associated with the cost and time saving technology.

Power over Ethernet (PoE) technology is now widely used across diverse security and surveillance applications. However, the latest version of the standard, first established in 2003, has evolved the technology’s capabilities to the point where security professionals are now able to find entirely new uses for PoE-enabled cameras and devices.

PoE technology enables integrators to easily connect, configure and integrate different types of systems, without having to learn a whole new ‘language’ and without needing to run separate cabling to individual cameras and other devices. This offers significant cost-savings because you now don’t need to provide power at every camera location and you don’t need to run 18/2 copper cabling. Instead, you will have a single cable for the data and power, with the added bonus of making functions like UPS battery backup easier, because now it is all centralised.

For system integrators, requiring fewer cable runs to deliver power and network connection to a camera makes it much easier to design and install new video surveillance solutions, as well as expand existing systems.

There are also PoE extenders available which negate the need for a local 240-volt power source by lengthening the distance over which power can be delivered over PoE and there are ways to daisy chain these extenders to provide power over greater distances.

PoE technology can also do much more, if used properly. The technology can extend beyond cameras to include lighting, digital signage, clocks, access control, entry and access badging systems, encoders, decoders and Public View Monitors (PVMs) and many other devices.

Standards have evolved and now support higher network speeds of up to 10 gig and allow for more watts to be received. As the new standards have been released, manufacturers such as Hanwha Techwin, have kept pace by upgrading and enhancing its cameras to best take advantage of each technology leap. PoE+, for example, provides up to 25.5 watts over Cat5, whereas PoE can only offer up to 15.4 watts. The increase in wattage available via PoE+ means that sufficient power can be provided for heaters to operate within the housings of cameras designed to operate in low temperature environments. PoE+ can also be used to power a camera’s built-in Adaptive IR LED illuminators in order to focus IR light on far away objects and in doing so, enable the cameras to capture high quality images in night-time conditions.

When it comes to PoE, there are two key terms which you are likely to come across:

It should be noted that a PoE extender camera, which offers a highly cost effective way to install a new two camera video surveillance solution or add a camera or another PoE enabled device to an existing system, might be referred to as either a PD or a PSE device, as they both consume and provide power.

When designing a system, professionals need to make sure they look at each device’s datasheet. If it says “12.95 watts,” that number shouldn’t be used by itself to size how big the power budget is on the infrastructure. If you have a 32-port switch, or even a 48-port switch, then 12.95 x 48 equals 621 watts. But 15.4 x 48 is 739. That’s a difference of 118 watts, which could cause devices to not receive enough power, changing your PSE selection. It’s important to always know what the actual power draw is on the switch side.

It is also worth mentioning that the ‘E’ in PoE does not mean ‘everything’. There is no ‘one size fits all’ and just because a switch says it can do PoE+, it probably can’t do that on all the ports. You will need to take into account how much power each camera or each device consumes and then do the maths to make sure that a switch can fully support your network requirements. If in doubt, never hesitate to ask the manufacturer to confirm that their PoE cameras, NVRs and/or PoE switches are able to meet your requirements.

Do you have some questions about PoE equipped cameras and NVRs? Email Uri Guterman at [email protected]