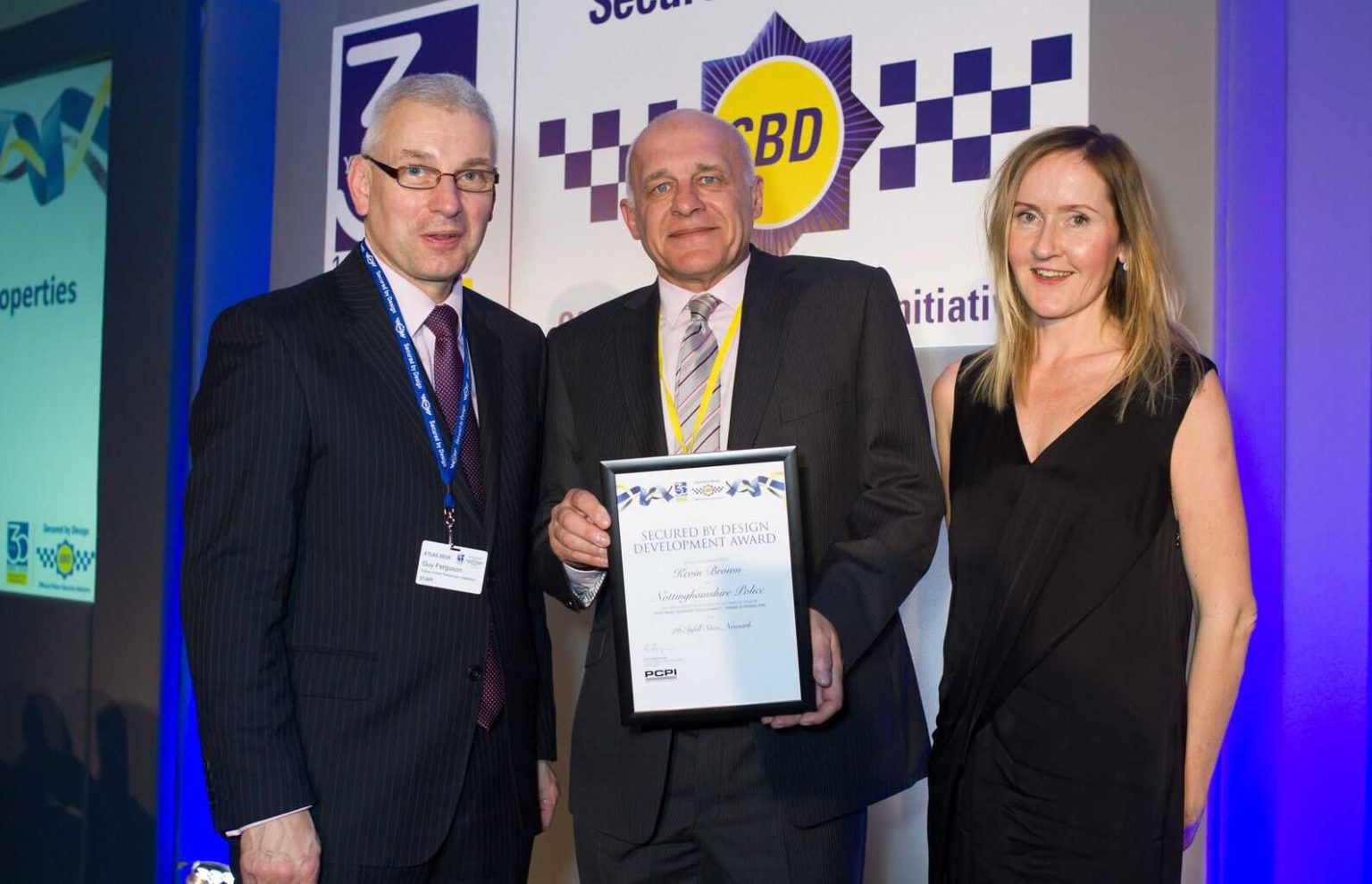 A series of small developments across Newark have been recognised for their crime prevention and security features at a national awards ceremony.

The developments across Newark were awarded runner-up in the ‘Best Small Developments Under 10 Properties’ category, with the work of a Nottinghamshire Police Designing Out Crime Officer on the project being acclaimed.

The developments were built on the sites of old, disused garages located across Newark, providing a mix of flats, bungalows and houses as part of Newark and Sherwood District Council’s five year partnership with the Woodhead Group to deliver new build housing across the area to meet social housing needs.

With each development having their own unique and complex developmental challenges, Nottinghamshire Police’s Designing Out Crime Officer Kevin Brown, worked with Newark and Sherwood Homes and their construction partner, the Woodhead Group, advising on security measures for the properties. Each development achieved such a standard that they were subsequently awarded a SBD Silver Certificate for the crime prevention features incorporated into them.

Kevin Burrows said: “Kevin Brown became an invaluable source of information when considering both safety and security elements of the developments.

“Kevin presented a vision of all positive facets of good design when considering resistance to crime. His advice and guidance subsequently allowed the Woodhead Group to design in all the major preventive features  – appropriate access routes, defensible space and ownership, and maximising the opportunity for surveillance were all considered in addition to the physical protection elements across all the sites.”

Tom Woodhead, Director of the Woodhead Group said: “The news of the recognition comes in the centenary of the Housing Act (1919), Secured by Design is a great example of innovation which has shaped modern, safe and secure housing in recent history.”

Rebecca Rance, Chief Executive at Newark and Sherwood Homes said: “Working with the police allows us to ‘design out’ crime and ‘design in’ safety features to our new homes, helping to create safer homes and communities. We are pleased to have this work recognised and hope it acts as an example of good practice to other developers.”

Boguslawa Motylska, Nottinghamshire Police said: “It was a great honour to be presented the Secured by Design Award on my colleague’s behalf. Kevin Brown had been involved in crime prevention since 1996 and he never ceased expanding his knowledge. His level of expertise was thoroughly impressive. I was delighted to see that Kev’s dedication to designing out crime and his achievements were recognised at the national level.”

Secured by Design is part of Police Crime Prevention Initiatives (PCPI), a police owned organisation that works on behalf of the Police Service to deliver a wide range of crime prevention and demand reduction initiatives across the UK.

SBD work to include proven crime prevention techniques and measures into the layout and landscaping of new developments and also work to improve the physical security of buildings using products, such as doors, windows, locks and walling systems that meet SBD security requirements.

This has led to more than one million homes built to SBD crime prevention standards across the UK – that’s 30% of all new homes built – with reductions in crime of up to 87% year-on-year as reported by Police Scotland in 2017.