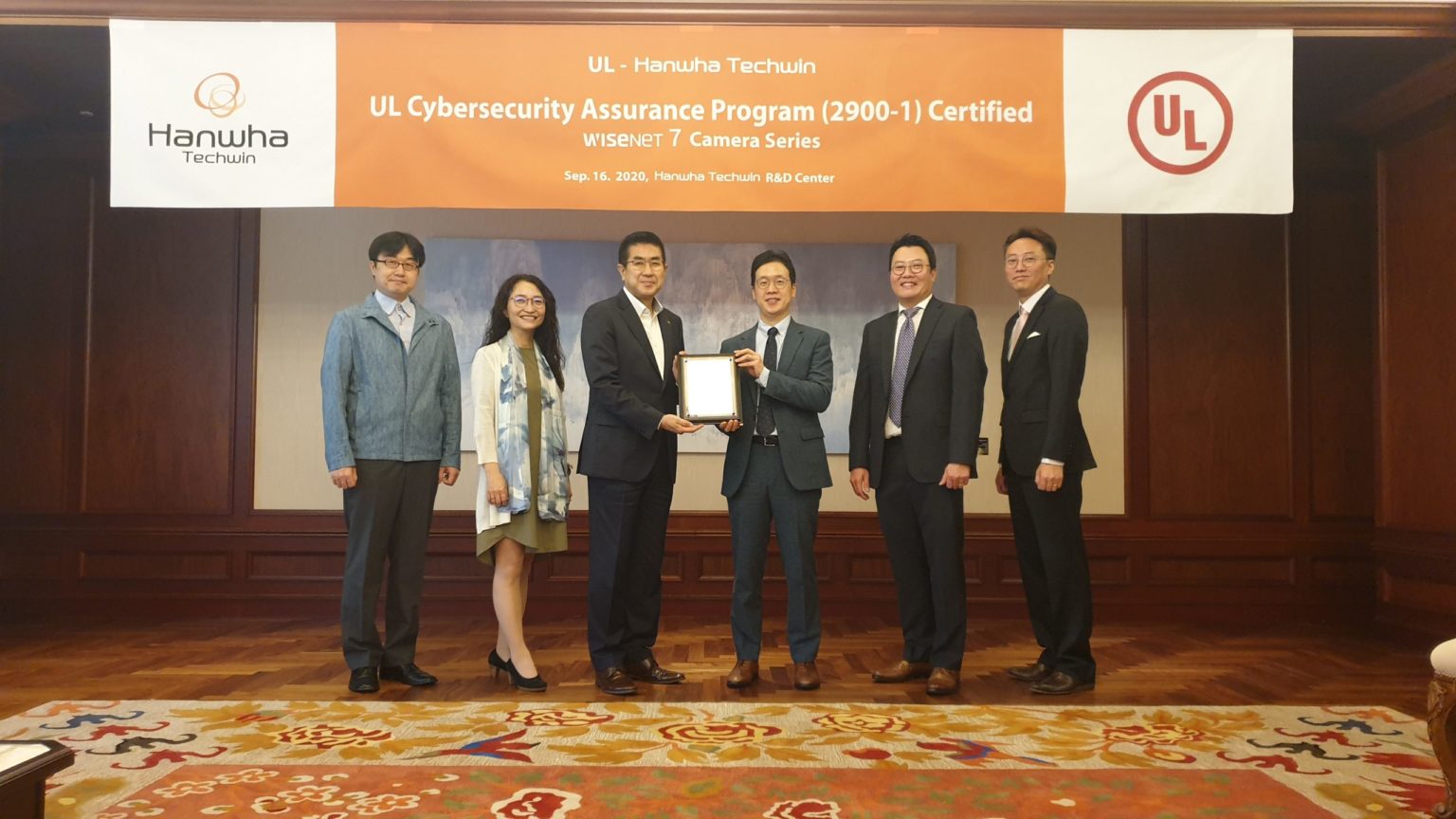 Hanwha Techwin’s position in video surveillance has been reaffirmed with the announcement that Wisenet7, the company’s next generation proprietary camera chipset, has achieved UL Cybersecurity Assurance Program (UL CAP) certification. With cybersecurity being a top priority for the electronic security industry, the certification enables Hanwha Techwin to validate that its latest generation of Wisenet cameras are equipped with the highest possible levels of protection from the activities of cyber criminals.

UL CAP is a certification program run by UL, a company which has been involved in safety science for over 100 years. The program assesses potential cybersecurity issues and the level of risk from hackers in respect of network-connectable hardware devices and software.

Hanwha Techwin is among only a handful of manufacturers within the video surveillance industry that have so far achieved the UL CAP certification for their products and is the only one within Korea to have done so.

With the support of the certification, Hanwha Techwin is able to provide peace of mind to system integrators and end users seeking to comply with GDPR by ensuring confidential data cannot be accessed, copied or tampered with.

Although it usually takes in the region of eight to 10 months, Hanwha Techwin was able to complete the certification process within three months as the company’s in-house Security Computer Engineering Response Team (S-CERT) had already been working on addressing any potential security vulnerabilities in Wisenet hardware and software. This ensured that Wisenet7 was able to meet all of UL’s thorough evaluation criteria, such as penetration test, access control and user authentication, encryption and software updates.

The ground-breaking Wisenet7 chipset boasts an impressive list of technologies which are designed to significantly improve the cybersecurity credentials of Wisenet cameras. These include:

Secure Boot Verification: This provides an extra layer of security by sandboxing different elements of a camera’s operating system, which means they are in a protected space. A full boot is completed before there is communication with any other part of the system. This prevents interruption to the boot process which could be exploited by a hacker.

Secure OS: Wisenet7 uses a separate secure operating system (OS) for encryption and decryption, as well as for verifying that apps have not been modified or are not forgeries. A separate Linux based API is needed to access the Secure OS, without which there is no way to make any changes from the outside of a camera.

Anti-Hardware Clone: This functionality prevents Wisenet7 from being cloned. In addition to protecting intellectual property, this ensures that a Wisenet7 chipset with a Hanwha Techwin label is a genuine copy and removes the risk of a cloned device which may contain malicious software being used to steal sensitive data, such as passwords.

Secure JTAG: JTAG ports are hardware interfaces which are used to programme, test and debug devices. Cyber criminals can gain low level control of a camera via a JTAG port and perhaps replace firmware with a malicious version. Wisenet7 prevents this from happening as it secures JTAG ports via a key-based authentication mechanism to which only authorised personnel working for Hanwha Techwin have access.

Secure UART: UART ports are serial interfaces typically used for debugging cameras. They allow administrator access to a camera and are therefore a target for hackers attempting to access sensitive information, such as password keys. By enforcing restricted and secure access to the UART port, Wisenet7 allows the debugging process to be safely completed without opening the door to cyber criminals.

“Cybersecurity is essential for network video surveillance products as it allows us to provide end users with confidence in knowing that their confidential data will be kept safe from hackers,” said Uri Guterman, Head of Product & Marketing for Hanwha Techwin Europe. “Achieving UL CAP certification for Wisenet7 underscores our commitment to equip our next generation of cameras with innovative features that set a new standard for cybersecurity.

“The certification helps us maintain our position as a global leader in a number of different ways. In Europe, Middle East and US, for example, major projects which are subject to a tender process often stipulate that UL CAP certification is required. In the private sector, it is not unknown for sensitive facilities such as laboratories and banks to insist that a supplier should have the certification.

“As such, Wisenet7’s CAP certification enables us to more actively promote our cybersecurity features as one of Hanwha Techwin’s strengths.”