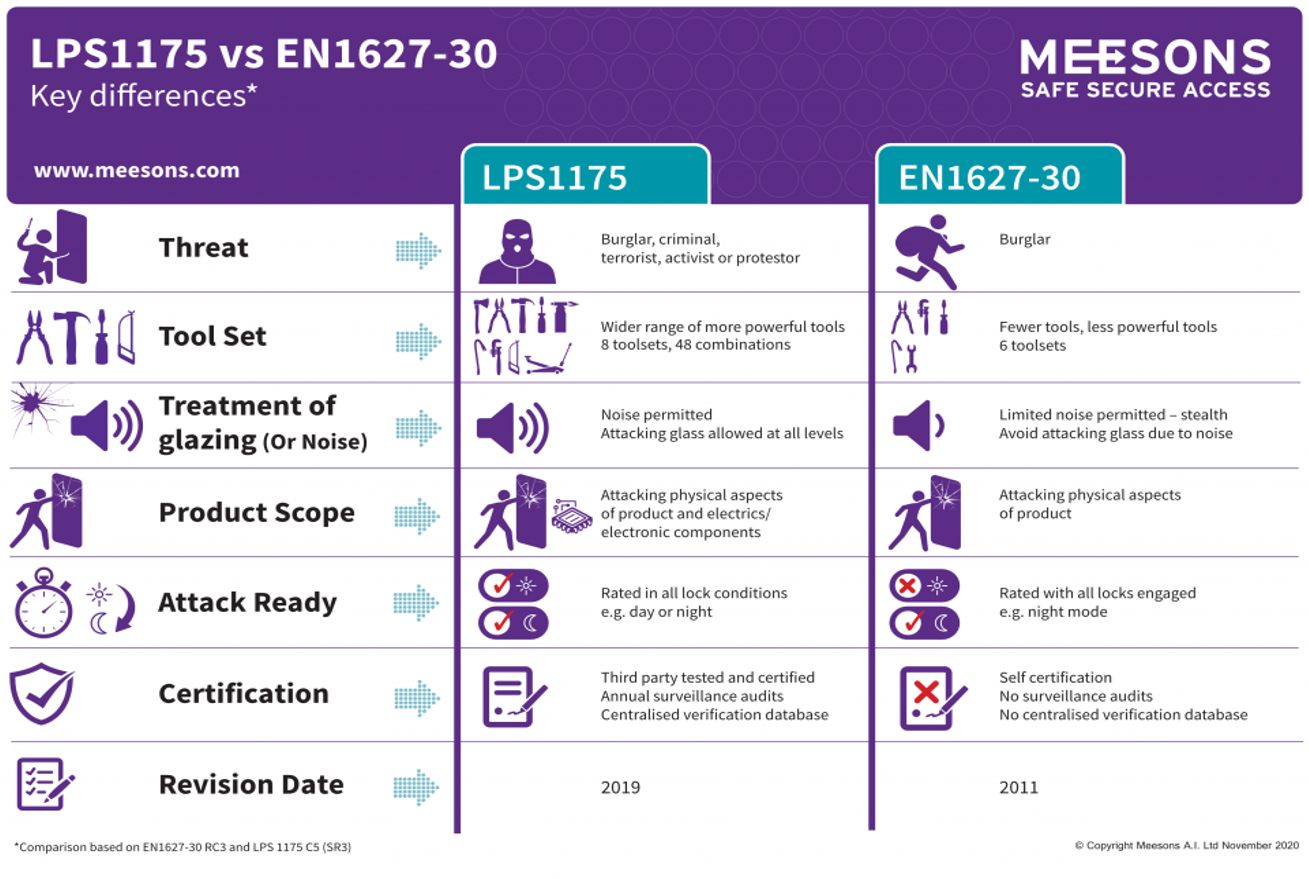 Meesons A.I. Ltd – member company of Secured by Design – have received a number of recent enquiries from specifiers wanting to understand more about the key differences between LPS1175 and EN1627-30 approved façade entrance security; they have compared these important standards that define the methods for determining a products resistance to unauthorised entry.

LPS 1175 is an internationally recognised certification whereas EN1627-30:2011 is a European standard that applies to products across Europe. These standards cover a wide range of security products, although here we will look specifically at Revolving Doors and Security Portals.

LPS 1175 stands for ‘Loss Prevention Standard’ and is one of the many LPS standards that are published by the LPCB (Loss Prevention Certification Board). LPS 1175 focusses on the physical security of a range of intruder resistant building components including products such as our Rev 190 Revolving Door and Security Portals

Issue 8 is the latest version of LPS 1175 which replaces and includes important updates from Issue 7. The changes to Issue 8 reflect the scope of tools now available to criminals, the size of tools they use, access to these tools, portability of these tools, as well as the power and effectiveness of the tools.

Issue 8 of LPS 1175 also uses a new matrix to define the security ratings, meaning they can be applied to a far wider scope of threat scenarios. It also supports the use of a layered approach by security specifiers to deliver extended delays to criminals who are prepared to use force to get into a facility.

In determining the Security Rating, the classifications take account of the risk and investment that criminals, terrorists, activists or protestors will consider in planning activity. This includes scenarios where larger more powerful tool sets may be used during a quick attack, or over a longer period.

Although the new standard covers 48 combinations of threat and delay it is envisaged that specifiers will achieve an extended delay by deploying a series of products as part of this layered approach.

EN1627-30:2011 represents the European Standard for the burglar resistant classifications of a range of security products like LPS 1175, which again includes Revolving Doors and Security Portals. The EN1627-30:2011 standard distinguishes six classifications with increasing resistance levels: Resistance Class 1 to Resistance Class 6 (RC1 to RC6). The latest version of EN1627-30 is now 2011, which replaces the earlier version from 1999.

The EN1627-30:2011 standard defines the resistance to burglary, a subset of criminal intent, with the LPS 1175 scope far wider covering intrusion whether by a criminal, terrorist, activist or protestor. This has led to some significant differences in the methods used to define the tests being conducted, the range of tools, how they may be used during the tests and what results are achieved.

Whilst both standards utilise a complete product placed in a test rig in a controlled environment, there are a number of key differences between EN1627-30:2011 and LPS 1175:

1. Range of tools – the scope of tools defined in each standard is different. This is most apparent at EN1627-30:2011’s higher resistance classes where the type of tools and attack methods catered for are fairly restricted compared to LPS 1175. Even within the middle resistance classes, for example, products rated to EN1627-30:2011 resistance class RC3 are unlikely to offer equivalent delay to forced entry when compared to Rev 190 Revolving Door and Security Portals* which are approved to LPS 1175 security ratings C5 (SR3).

This is the case even though the resistance times defined in EN1627-30:2011 for those resistance classes are greater than those defined in LPS 1175 for security ratings C5. This is due to the scope of the tools available and the respective delay time within each standard; the tool sets in LPS 1175 are continually evaluated with the latest revision of the standard (Issue 8) issued in 2019.

2. Method by which tools are used – a significant difference with EN1627-30:2011 is that it assumes burglars will use stealth rather than creating noise by trying to force their way into the facility. This restricts which tools may be used with RC1, RC2 and RC3 tests and whether they may be used to impact the product. The issue with this is that it ignores all those criminals, terrorists, activists and protestors that are not concerned about making noise to break through the security barrier.

It is therefore advisable to avoid specifying EN1627-30:2011 (up to RC3) for situations in which an intruder may be willing to make noise when attempting to force an entry. As a result, it is generally considered that EN1627-30:2011 resistance classes RC1 to RC4 are not equivalent to LPS 1175 security ratings up to C5 (SR3). If users are unsure or believe that criminals may be prepared to generate noise, which will be the case in most instances, it would be prudent to specify an LPS 1175 Revolving Door or Security Portal rather than one that meets EN1627-30:2011.

3. Different treatment of glazing – another key difference with EN1627-30:2011 is that the tests assume intruders will avoid attacking the glass because it generates noise. LPS 1175 assumes the worst case of technique used and specifically tests for a forced attack for intruders impacting the glass with a range of tools at all Threat Levels (letter A to H).

4. Failure criteria – the size and shape of the test block is another difference between LPS 1175 and EN1627-30:2011. This is due to the assumptions made about the physical size of the intruder. EN1627-30:2011 assumes that the intruder is much larger than that for LPS 1175. LPS 1175 factors in a smaller person being able to squeeze through an aperture they create or reach through with their arm to grab an item inside or to operate the entrance system.

5. Product scope – ensuring the standard specified is appropriate to the type of product being testing is critical. Tests conducted to LPS 1175 include attacks aimed at undermining the product’s integrity – this includes electric, electronic and electromagnetic systems where components are not suitably protected. This is not considered as part of the scope of evaluation within the EN1627-30:2011 standard. In some instances, focusing on this area of the product can be a far more effective route for intruders to gain entry than attacking the glazing.

6. Attack ready – this is a fundamental difference between EN1627-30:2011 and LPS 1175. This is because the former only assesses a Revolving Door or Security Portals’ resistance to forced entry when the product is fully closed and all locks are engaged, for example, in night mode. Conversely, LPS 1175 evaluates their resistance to forced entry when alternative locks are engaged, such as daytime and night time locking modes. LPS 1175 Issue 8 Rev 190 Revolving Doors and Security Portals are attack ready whatever time of day.

Richard Flint, Technical and Business Development Manager at BRE remarked: “A large number of products that had been rated to EN 1627 have been submitted to BRE for evaluation due to specifier concerns regarding whether they would afford equivalent delays if evaluated to LPS 1175 as that standard bares a greater similarity to the threats the specifiers were concerned about.”

“In all cases the EN 1627 certified products delivered significantly less resistance when tested in accordance with LPS 1175. For example, over 90 percent of the RC4 products BRE have tested to LPS 1175 failed to achieve more than Security Rating 2 to LPS 1175. That is, in place of delivering 10 minutes of resistance as may have been expected based on the EN 1627 RC rating attributed to those products, they actually failed to deliver 5 minutes resistance using much smaller category C tools and were only capable of delivering at least 3 minutes resistance to category C tools such as claw hammers, screwdrivers and knives.”

Whilst both standards focus on a products physical robustness there are key differences to the testing and certification that mean they are not comparable. It is important to consider these differences when specifying Revolving Doors or Security Portals for buildings.