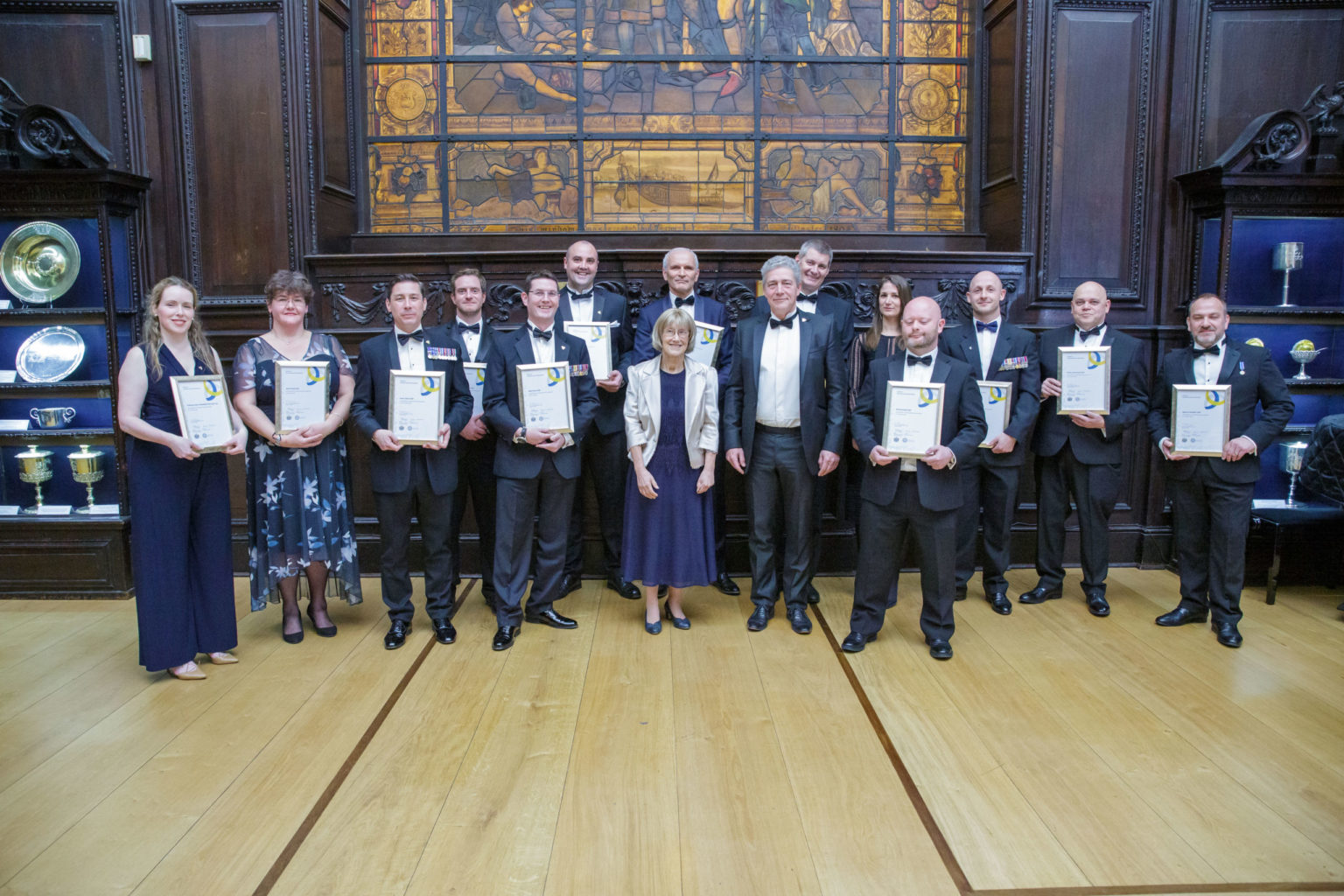 The Register of Chartered Security Professionals was very fortunate to be able to hold its Annual Celebratory Dinner for its registrants on 12 March, just a few days before the lockdown started. Hosted at the magnificent Stationers Hall in the City of London, attendees were able to celebrate another successful year for the Register and witness certificate presentations to 14 new Chartered Security Professionals.

The host was Baroness Henig of Lancaster CBE DL, Chairman of the Registration Authority and guests included the Master of the Worshipful Company of Security Professionals, Mike Barley, After-Dinner Speaker Commissioner, Ian Dyson QPM of the City of London Police, compere, Bob Martin JP CSyP, CSyPs and guests and members of the Register management board. Two key supporting organisations (SIA and CPNI) were also represented, alongside leading universities which provide academic qualifications in security. Unable to attend in person was Lord Alex Carlile, who had previously accepted a position as Patron of the Register of Chartered Security Professionals during 2019.

In welcoming guests, Baroness Henig made reference to the rising levels of interest in the Register, as seen by the number of attendees at the CSyP Application Workshops. These continue to be held online for potential applicants with free sessions held weekly in order to meet demand for participants across the globe. Recruitment success in 2019 could also be measured in the additional number of volunteers trained who are now participating in assessing applicants.

The Baroness also thanked the generosity of event sponsors, Dallmeier electronic UK, The Security Event, Wagestream and Bidvest Noonan, all of whom were represented.

Plans for the remainder of 2020 will focus on delivery of the agreed Business Plan which was developed and published in 2019 and all CSyPs will have the opportunity to contribute to this. The 2021 Annual Celebratory Dinner will be held on 11 March 2021, and it is intended to return to Stationers Hall.

It was an extra special evening for those Chartered Security Professionals receiving certificates from Baroness Henig, whilst the Registrar, David Gill CSyP read citations which demonstrated their diversity, impressive backgrounds and achievements.

Professor Alison Wakefield – Alison is a leading light across the whole sector not only for her academic prowess and ability to richly advise and feed into Government and other organisations but by her Chairmanship of the Security Institute. A renowned academic in security and criminology she is an exemplar of thought leadership and professionalism. Alison holds a PhD in Criminology from the University of Cambridge and is the third Professor to be admitted to the Register of Chartered Security Professionals along with Professor Martin Gill and Professor Phil Wood.

Allan Parry  – Allan is the Lead National Inter-agency Liaison Officer for the Scottish Ambulance Service, responsible for co-ordinating liaison and support to all domestic and international partner agencies on Serious and Organised Crime and Counter Terrorism issues. With a distinguished military background, he continues to practice in public protection, where his extensive academic pedigree in security disciplines, as a graduate of Universities in Bristol and St. Andrews will underpin his doctoral research into the psychology of Counter Terrorism Operations with Liverpool University.

Amanda Seevaratnam – Amanda is an extremely experienced senior security professional with a background in the defence industry, more recently in the MOD. Amanda’s abilities and management expertise has led to her being the strategic lead on many high-level security and defence projects. Amanda is an ASIS Certified Protection Professional and holds an MSc in Security Management.

James Eaton – James is a cyber risk specialist advising a major financial institution. James is a former Intelligence Officer in the armed forces with commendations from the National Crime Agency and Metropolitan Police. James is a Fellow of the Security Institute; and a Liveryman in the Worshipful Company of Security Professionals. He holds a Master’s degree in Business Continuity, Security & Emergency Management and a Diploma in Management & Leadership.

Matthew Hatchard – Matthew is a technical specialist and expert in Information Communication Technology with a leading European Security and Risk management group. Matthew is a Chartered IT Professional, a Prince 2 practitioner and holds a BSc in computing Network Security & Communications, he also holds an MSc in Project Management (Distinction) and too many other qualifications and accreditations to mention at this time.

Nick Davies – Nick is the strategic lead for security for commercial entities within the Kings Cross area of London. Prior to his current role he served with Metropolitan Police Service as a Borough Commander.  Nick was the national lead on some major technology-based crime prevention and research initiatives.  In addition to completing numerous police senior command courses. Nick also holds a number of advanced qualifications in: Counter Terrorism, International Security Management, Occupational Health & Safety and in Management via the Institute of Chartered Management.

Paul Barnard – Paul served with the City of London Police attaining the rank of Det Chief Superintendent, Paul led on numerous multi-agency projects including serious and organised crime and cyber-crime. Paul is currently a director of a national security company and is also on the board of the Security Institute with a keen interest in mentoring young people from across the sector. Paul holds a Master’s degree in Applied Criminology from Cambridge University.

Peter Jones – Peter is a subject matter expert in Access Control, he designs and delivers advanced high-tech integrated security solutions to some of the UK’s largest commercial businesses. Pete holds an MBA, his dissertation related to the introduction of new security technologies. He is currently undertaking a Master’s degree in Cyber Security at Cardiff University. Pete is a member of the Security Institute and would be happy to answer any questions about biometrics.

Rob Kennedy – Rob Is a senior member of a major security company. He specialises in Physical security protection and Training. Rob studied at Leicester University and holds a BA and Master’s degree in Security and Risk Management. Rob is a full member of the Security Institute and chairs the Security Education Accreditation Training and Standards SIG as well as an active member in the Business Continuity, Emergency Planning, Crisis Management and Resilience SIG.

Simon Harris – Simon’s successful admission is thoroughly deserved given his outstanding career and academic achievements. Simon’s career started as a police constable, his talents were quickly recognised and led to him being selected to join the Serious Organised Crime Agency. Simon chose to change his career path from law enforcement and went into commercial security and has since worked in corporate security for some high-profile organisations; he is currently the EMEA Director of Security and Health & Safety for one of the largest film and entertainment businesses in the world. Simon’s academic achievements include a BA in Criminology and Politics and an MSc in Criminology

Spencer Bowdler – Spencer is a highly experienced security professional and a lead consultant for a national security company. Spencer has advised on a range of security and risk measures on some of the UK’s major construction projects including the nuclear industry.