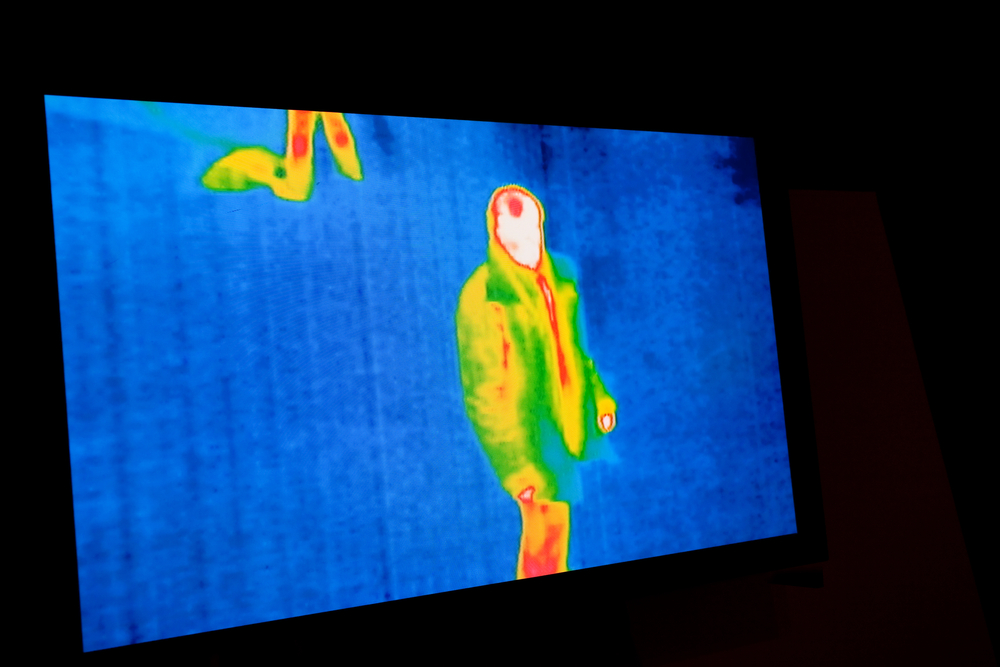 Innovative perimeter protection solutions from this month’s Knowledge Partner, Hikvision are helping organisations of all sizes secure their premises.

From moats and towers to walls and electric fences, perimeter fortifications have been around for millennia. Today’s technology brings us various types of electronic perimeter protection systems, mainly detecting and sometimes preventing would-be intruders from crossing over into protected areas.

Over the past decade, advances in technology and hardware have vastly improved these perimeter security systems with developments in thermal network cameras, radar detection systems, alarm sensors and now even drones that accomplish unprecedented security tasks.

More recently, the development of advanced algorithms has helped to reduce false alarms that many of these devices trigger automatically. However, consistent, reliable verification between true and false alarms was still lacking.

Hikvision has built advanced Artificial Intelligence technology into our solutions. This means that our cameras, control-room equipment and back-end infrastructure can now ‘learn’ about potential threats for themselves by recognising people, vehicles and even behaviours.

The manual interventions needed with traditional security systems mean that teams were frequently reacting to breaches that had already happened. Artificial Intelligence changes all this by recognising potential threats before they impact company’s people or assets – allowing security teams to react immediately to neutralise any potential threat.

For example, Hikvision Artificial Intelligence solutions can automatically trigger alerts when a person appears in a restricted area, or when a vehicle with a blacklisted number plate enters a site. With alerts delivered in real time, teams can identify and react to security threats and protect people and assets more effectively. And because alerts are automated, potential threats are hardly missed or overlooked.

From reactive to proactive perimeter protection

First, let’s talk about the type of security that is the highest priority for everybody – residential protection. The perimeter of a community is the first line of defence against security threats and perimeters without security measures are often the first choice of illegal intruders.

At present, most technical defence for communities is based on infrared perimeter alarm systems which are a passive type of defence system. When an intruder activates the alarm system detector and triggers the alarm, the monitoring centre will notify security personnel.

But the concept of proactive defence is gradually becoming a new trend for the development of community perimeter protection. That means the concept of security is to actively prevent intruders from crossing a perimeter – to stop criminal acts before they happen.

The camera features a built-in PIR detector that captures infrared wavelengths emitted by human bodies and distinguishes it from other visual “noise.” It can be equipped with Hikvision’s Turbo HD K-Series DVR motion detection to filter out a high rate of false alarms caused by moving targets without human body IR emission. This way, filtering false alarms reduces storage space and costs and it also means more efficient post-event footage search. 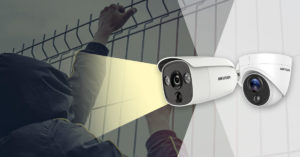 In addition, the camera features a strong and immediate deterrent by producing a flashing white strobe light that serves as a warning signal to stop intruders. And with ultra-low-light technology, the white light serves as supplemental lighting, enabling the camera to capture clear images of suspects as evidence when the alarm is triggered, even in extremely dark environments.

When an intrusion occurs, Hikvision cameras can issue an auditory warning immediately and notify security personnel to go right to the scene. In some cases, intruders will be deterred and leave – thus crime can be prevented, not just detected.

The camera can support a broad range of perimeter protection and security system processes for pre-warning, warning in process and evidence collection after an accident. It has truly improved monitoring functions, surpassing the traditional “post-event investigation” approach and helps changing perimeter protection from passive monitoring to active deterrence, protecting people and property.

Small and medium businesses have many of the same surveillance and security requirements as larger organisations. They need to identify and react to perimeter breaches in real time and they need to automate footage searches to quickly locate recorded events.

Conventional surveillance systems provide certain detection features enabled by video content analysis (VCA), such as motion detection, line-crossing detection and intrusion detection. But this would simply compound event detections, triggering frequent alarms when an object is detected. These false alarms can be caused by an animal, a shadow or other natural movements. As a result, security guards need to spend time investigating each one, potentially delaying any necessary response and reducing operational efficiency.

So being able to identify the real threats – the presence of a human or a vehicle – would greatly improve the accuracy of perimeter VCA functions. Hikvision’s hassle-free AcuSense technology can help achieve this goal and give a cost-effective way to protect assets.

With today’s deep learning technology, security solutions are enabled with sophisticated intelligence and efficiency at a whole new level. Hikvision AcuSense is born out of this new era, making advanced VCA and deep learning capabilities available to small to medium size businesses for the first time.

Employed with advanced VCA and deep learning algorithms, Hikvision’s AcuSense series helps maximise security with efficient human and vehicle detection by categorising alarm information into human, vehicle and other objects. With high accuracy, the system disregards alarms triggered by other objects such as rain or leaves and delivers alarms that are associated with human or vehicle detection.

With Hikvision AcuSense, security personnel or local police can also get a “quick target search” feature to find footage quickly in the event of a security incident. This cuts out many hours otherwise spent manually searching for footage. 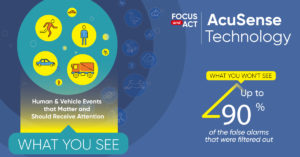 Now re-imagine the perimeter security system armed with Hikvision AcuSense technology. Video surveillance is in operation when an intruder tries to sneak in on a windy and rainy day. The intruder probably thought such bad weather would do him a favour, as there are no witnesses near the assets. But this is not the case.

The security camera, equipped with AcuSense, precisely captures the intruder entering the protected area. At the same time, users receive a message on their smartphone and view the video feeds. With this verified alarm, action can be taken straight away. Hikvision AcuSense prevents problems before they escalate into would-be emergencies.

Once a potential intruder has been accurately detected, the AcuSense network camera triggers the built-in strobe light and audio alarm. This is designed to warn the intruder off before they attempt to breach the perimeter. The volume of the audio alarm and the brightness of the strobe light can be adjusted to suit the environment.

Our fully-integrated video surveillance makes it easy to see and capture important activity with video alerts, live feeds and 24/7 digital video recording – all easily viewed from with the Hik-Connect mobile app.

Quick target search – More efficient and effective file searching based on human and vehicle classification, preventing security personnel from having to search through footage manually.

Strobe light and audio alarm – Wards off potential intruders by combining a siren with a flashing light.

Hikvision AcuSense technology can be found in our EasyIP and Turbo HD product ranges, which provide the ideal security solutions indoors and out, in small factories, residential estates and apartments, small hotels and gas stations, just to name a few.

The AcuSense network camera range can deliver this powerful intrusion detection and prevention at all times of day or night. Powered by Hikvision DarkFighter technology, all cameras in the range deliver superior surveillance images, even in ultra-low light.

The new AcuSense network cameras are available in bullet and turret styles and in 2MP or 4MP resolution, making a total of four different camera options available.

Seeing the perimeter clearly in a new way

Finally, some projects or geographical environments have challenging climate conditions, such as dusty open-pit mining, foggy seaports or even snowy national borders. Questions arise: how do we protect these perimeters in adverse weather conditions and after dark?

Integrated with our proprietary thermal imaging module, Hikvision thermal cameras can detect the temperature of the object itself, generating images of infrared, or “thermal radiation” that cannot be seen by the naked eye. This type of image reproduction is not affected by lighting conditions—either extremely low light or even no light at all. And compared against visible light imaging, thermal imaging is considerably less impacted by weather conditions such as fog, smog, rain and snow.

In addition to all this, Hikvision’s performance series thermal bullet cameras contain a built-in GPU for running the deep learning algorithm to effectively create perimeter protection and detect illegal intrusion. Its intelligent video content analysis technology can help reduce false alarms by filtering out interference factors such as changes in lighting or movement of animals in the field of view. Only actual threats trigger alarms, making security measures vastly more efficient in preventing unwanted entry.

Hikvision thermal cameras can be used in a broad range of perimeter security solutions, specifically in industry scenarios like power stations, airports, mines and farms. Although thermal imaging cameras are much more expensive than CCTV cameras, they reduce the number of cameras installed in the same area, greatly reducing the workload of installation personnel. In some cases, the thermal camera can be mounted directly onto an existing building and it can capture clear images at night without the need to install supplemental lighting or infrared faculties, also saving a lot of operating and maintenance costs.

This article was published in the November 2019 edition of International Security Journal. To receive your FREE digital issue, please click here: https://internationalsecurityjournal.com/digital-magazine/