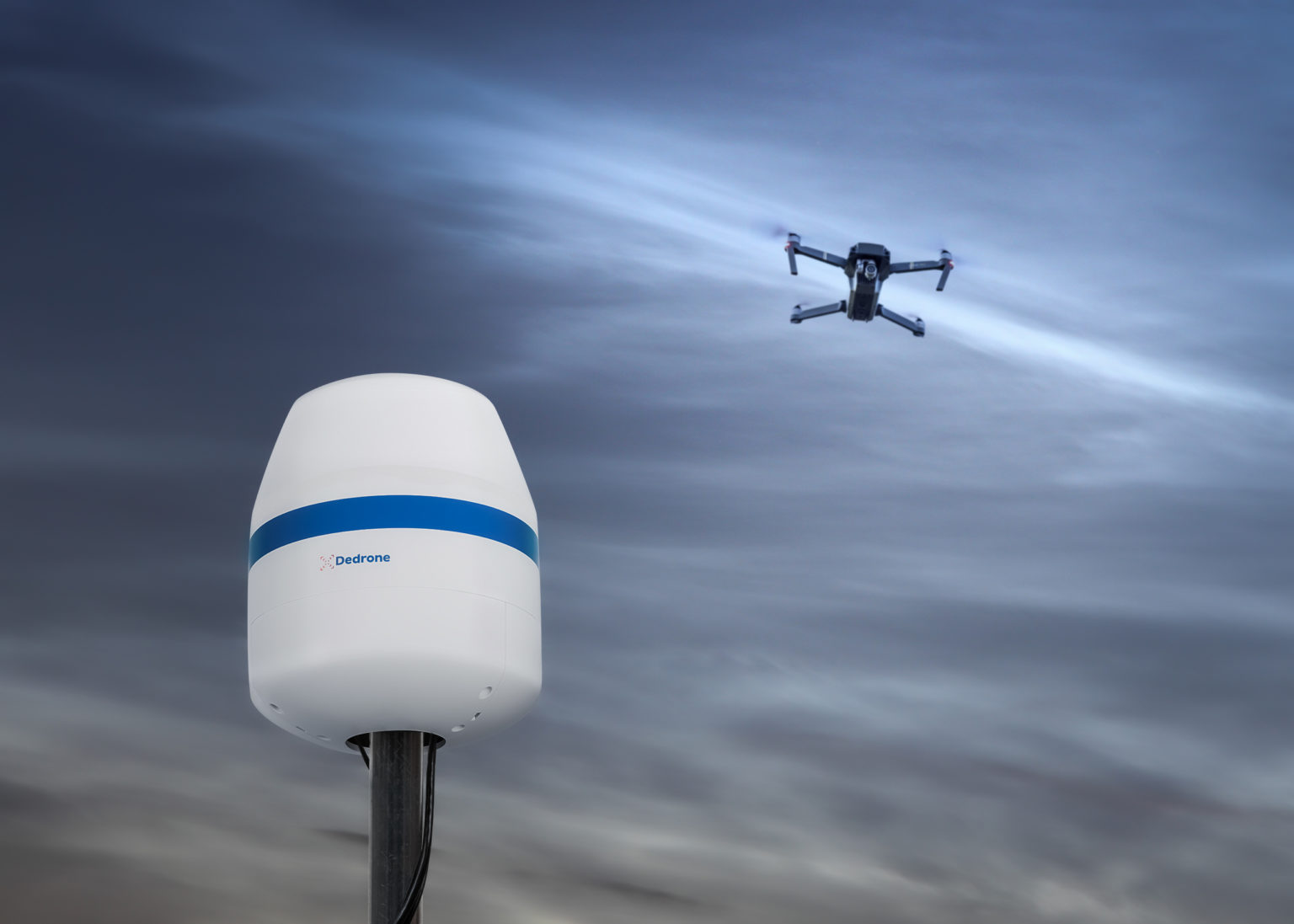 The most dangerous threats are often the ones you can’t see – and in the case of airports, drones have emerged as a perfect example of that.

Small, agile and increasingly sophisticated, drones have developed rapidly over the last decade and sales have taken off too. But while drones are proving to be invaluable tools in commercial and industrial applications and they are also hugely popular with hobby users, in the wrong hands – or flying the wrong places – they are potentially lethal.

The US Federal Aviation Administration (FAA) says that drone sightings by pilots and observers from the ground have increased dramatically over the last two years and now total more than 100 each month.

A drone collision with an aircraft during its period of greatest vulnerability – that is, on its final approach to the airport, or at take-off – could be catastrophic. Such collisions could cause far more harm than a bird, according to research completed by the Alliance for System Safety of UAS through Research Excellence (ASSURE) and the FAA.

It’s not just collisions that are a cause for concern. Even a small piece of debris on a runway can present a serious risk of FOD (Foreign Object Damage) to aircraft travelling at speed. Now, with drones easily able to breach airfield perimeters, it has become harder to ensure that potential hazards are not being scattered across runways, deliberately or accidentally.

The ease with which drones can fly over perimeters risks undermining the very concept of airside security, offering new ways for contraband items to be smuggled into, or out of, secure areas.

As the three days of chaos at London Gatwick illustrated in December 2018, the potential for damage is amplified by the invisible nature of the threat, with such small, hard-to-spot devices making incursions into such large ‘secure’ areas. The runway was closed for over 33 hours, cancelling over 1,000 flights and leaving nearly 150,000 passengers stranded. One airline, EasyJet, reported losses of over £15 million.

Direct collisions with aircraft, debris on runways, disruptive flying (whether a hoax or genuine), smuggling items into and out of secure areas – airports around the world are beginning to address all of these risks with new C-UAS strategies (Counter-Unmanned Aerial Systems).

Just as drone capabilities are evolving and users are becoming more sophisticated, so are approaches to countering them.

In the UK, the Centre for Protection of National Infrastructure (CPNI) has released its first official counter-drone guidance for security practitioners at national infrastructure sites, including airports, stating that it’s vital “that robust preparation and planning is undertaken to assess the risks that UAS pose”. CPNI emphasises the importance of preparing site-specific C-UAS strategies that are based on intelligence-led, data-driven risk assessments.

Intelligence and data must be the foundation-stones for every C-UAS strategy. While it may be possible for an eyewitness or passenger pilot to say that a moving object in the air is a drone, this method of detection is unreliable and limited in scope. The only way that airports can detect and classify drones reliably is through technology. The absence of reliable drone activity data is a big weakness that airports are being urged to address.

In other words, they are being advised that they must make the invisible visible.

In their assessments of the technical solutions now available to airport security departments, CPNI has so far prioritised DTI (Detection, Tracking and Identification) technology above DTIE (‘effector’) systems, i.e., those which offer to disable or neutralise drones. Many types of effectors have been proposed for airports. However, practical and legal considerations indicate that they are not currently considered to be appropriate for civil, non-military environments.

By contrast, the most powerful DTI technology today delivers highly accurate information about the location, speed and direction of travel of drones and can pinpoint and track the ground control system (GCS), and with it, the operator.

Giving security departments this granular situational awareness allows drone incidents to be responded to rapidly and precisely, whenever they occur.

Flight disruption due to mistaken sightings or deliberate hoaxes can be minimised and the risk of debris on runways or breaches of airside security quickly tackled.

DTI systems provide intelligence and evidence for security providers to take action against drone threats. This information can include the locations of drone operators, identifying which drones they are flying, where and for how long.

In other words, DTI systems give airports the data they need to tackle the problem at the source – using the law, exactly as it is used in other cases of trespass, criminal damage or malicious activity.

They also reveal the scale of the problem. In 2018, in a first-of-a-kind study, Dedrone installed its counter-drone detection systems at four major airports across the UK, to identify and analyse drone activity. The four airports wanted to determine if they had any drone incursions at all and, if so, to develop C-UAS strategies to protect their operations. The exercise over 148 days revealed that, on average, every day, there were two drone incursions into restricted airspace.

It’s vital for airports to be able to see the threat accurately, both in real-time (so that they can deal with immediate threats) and longer term, over weeks and months (so that they can analyse trends and activity patterns). Airports involved in the Dedrone study, as well as a growing number of others, have deployed the technology permanently.

Events like the Gatwick shutdown and other threats to critical infrastructure from drones, may also be the reason why CPNI has focused on DTI solutions in its Catalogue of Security Equipment. This Catalogue provides airport security planners solid parameters for comparing C-UAS technologies. For the first time, C-UAS Solutions (including Dedrone’s DroneTracker) have been evaluated against a rigorous, independent detect, track and identify test standard.

There are currently more than 500 counter-drone technologies on the market, according to the Center for the Study of the Drone, but very few of those have been assessed to any meaningful operational or performance standards.

To help airports assess which technologies work, which are practical and which are safe to deploy, the CPNI’s new Catalogue of Security Equipment (available to Critical National Infrastructure security planners) is a useful reference source.

For anybody comparing solutions, it’s vital to take account of how the threat may evolve and how any solution deployed will cope with future attack capabilities.

For example, to maintain identification capability, systems need regular software updates (they may be able to identify over 90% of drones now, but that will only remain true if vendors keep adapting to new platforms).

When multiple detection technologies are incorporated to create a complete system (including acoustic sensors, cameras, RF/WiFi and radar, among others), each detection technology provides additional layers of data. The best solutions will let you integrate a variety of brands and models of sensors to fit your exact needs.

Another significant factor is how accurately the technology detects both the position and direction of the movement of a drone. Even when extensive areas are being monitored, reliable pinpointing of a drone’s position to an accuracy of no more than 50m and preferably much less is a sensible goal. With the direction of travel (bearing), we recommend an accuracy of no less than ten degrees. It’s also important that a counter-drone technology also can locate and track the ground control system (GCS), and with it, the operator.

Other capabilities that airports need to assess when comparing C-UAS technologies is their minimum and maximum vertical detection range. A covert incursion may come in low to the ground, or it may approach at the height of over a thousand feet. C-UAS technologies must also be able to detect multiple drones simultaneously, to cope with decoy attacks and drone swarms.

In terms of usability, airspace security systems should not need a dedicated monitor – detection alerts and analytics should be instantaneously available and integrated with wider security systems to enable security personnel to take decisive action as soon as an incident occurs.

The lag to adopt counter-drone technology at airports will only become more dangerous as more incidents occur. Drones are here to stay and they will continue to threaten airport operations, leaving passengers frustrated and airlines blocked out of safe and clear airspace. With counter-drone technology and concrete evidence of drone activity, airport operators can consider how to approach drone safety measures and determine the additional risks that drones pose to their overall security program.

This article was published in the February edition of International Security Journal. Pick up your FREE digital copy here