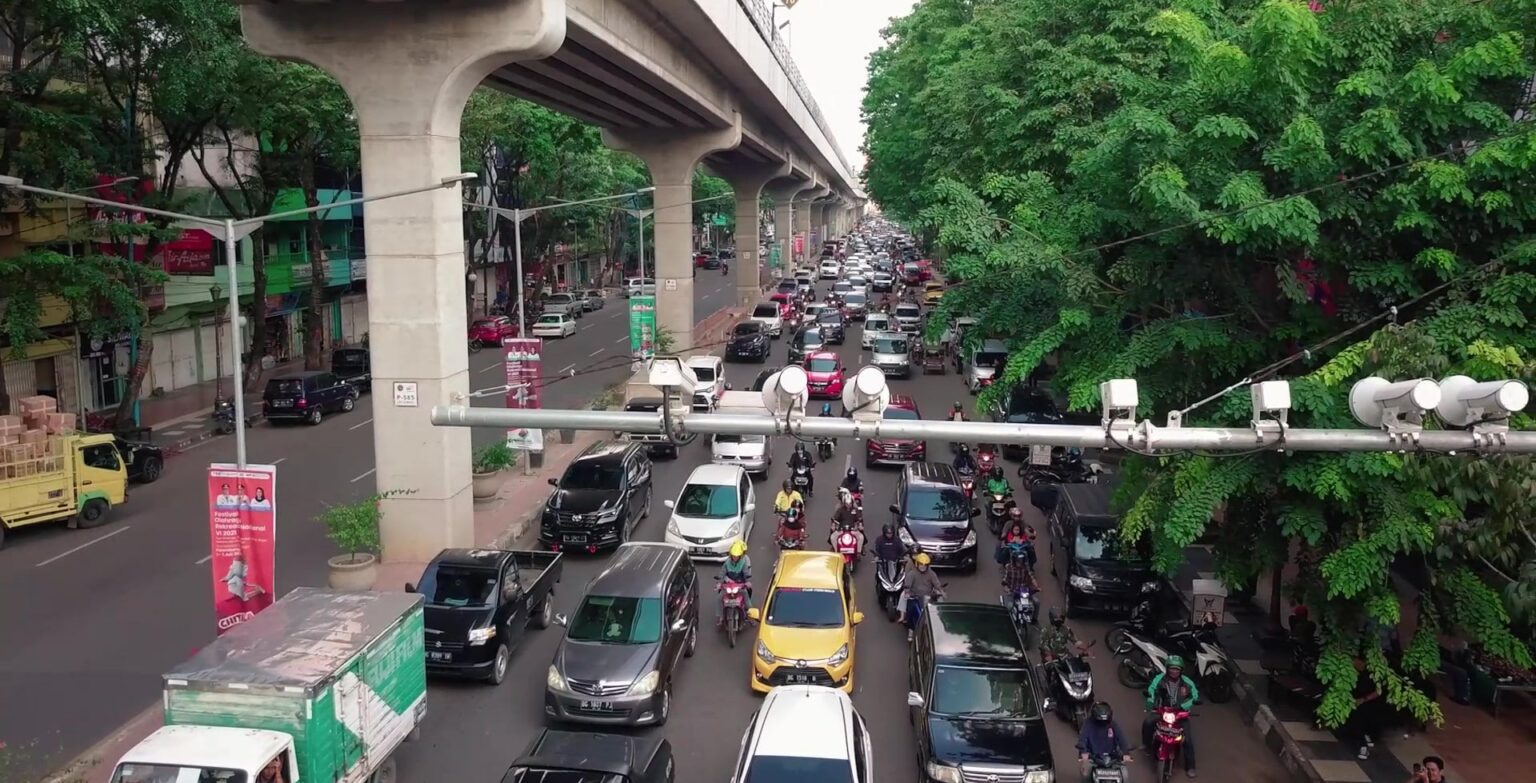 Indonesia is one of the largest economies and the fourth most populated country in the world. What’s more, its most densely populated regions, such as Jakarta and South Sumatra, endure extremely high volumes of highway traffic every day.

Many of these densely populated regions are suffering from chronic congestion due to growing numbers of vehicle along with traffic violations and accidents. Even worse, the lack of a smart video system was causing a lot of manual work. This problem fell primarily on the traffic police, who had to keep eyes on each camera present in their assigned areas to drivers violating traffic laws.

In addition to this, when police spotted a driver violating the rules, they had to manually note down the vehicle number and file a report. This process was a huge burden to the traffic police department as it required 24/7 monitoring and excessive amounts of manpower. It also resulted in many human errors with traffic ticket handling and administration.

To raise awareness of safety and to reduce the number of traffic violations, Korlantas, the traffic department of the Indonesian police force, decided to implement its Electronic Traffic Law Enforcement, or ETLE. Erwin Aras Genda, Chief Executive of ETLE in South Sumatra, said: “With ETLE, traffic violation detection will rely on a smart video system and the ticketing process will be digitalised, which makes violation management more efficient and effective. To achieve this, the first step is to install smart traffic cameras.” After researching several options, they deployed Hikvision’s intelligent traffic solution.

To address the country’s ticketing problems, Hikvision developed customised algorithms to identify the most common kinds of traffic violations handled in Indonesia. Violations that the system can pick up include running a red light or stop sign, wrong-way driving, improper lane usage, illegal parking, motorcycle overloading and riding without helmets, odd-even plate violations, speeding, unfastened seatbelts and using a cell phone while driving, among others. Hikvsion’s intelligent traffic cameras provide these AI analytics.

9 MP ANPR Intersection Violation Capture Units (iDS-TCE900-A/16) and 9 MP IR ANPR Checkpoint Capture Units (iDS-TCV900-AI/25) were installed at the busiest intersections and checkpoints in the most populous regions, including Jakarta and South Sumatra. These artificial intelligence-enabled smart cameras identify and process traffic violations, classified by the algorithm. The high-definition violation evidence then gets safely stored in Hikvision’s Hybrid SAN systems.

The benefits: Embracing digitalisation for greater efficiency and transparency

With Hikvision’s intelligent traffic solution, thetraffic violation ticketing process in Jakarta and South Sumatra has been digitalised and automated, making the administrative management process more efficient and effective throughout the ticketing process, as well as assisting traffic units in administrative management. The current electronic ticketing system has proven to be much faster than conventional ticketing, reducing the time spent in issuing a traffic violation and making it possible for traffic officers to spend more time patrolling and less time checking video footage and completing paperwork.

In addition, artificial intelligence improves the accuracy of the tickets issued, minimising disputes between citizens and traffic officers due to human errors. With higher automation and less manual work, the system is now more transparent and the issue of human errors has been reduced considerably.

Jakarta and South Sumatra have been the first regions to implement the ETLE system. Erwin Aras Genda commented: “With the help of the intelligent traffic solution from Hikvision, ETLE has been successfully implemented in South Sumatra. Digitalisation of the ticketing system has facilitated speed, convenience and transparency of the ticketing process. The success of this project is encouraging more and more Indonesian cities to implement the system.”

Moreover, this project has provided a peek into what AIoT can do for traffic management. “As AIoT becomes an increasingly fundamental technology for effective traffic management, cities are embedding artificial intelligence-enabled smart cameras at interactions, along city streets and other areas of traffic concern,” said Stephen Shi, Project Director at Hikvision Indonesia.