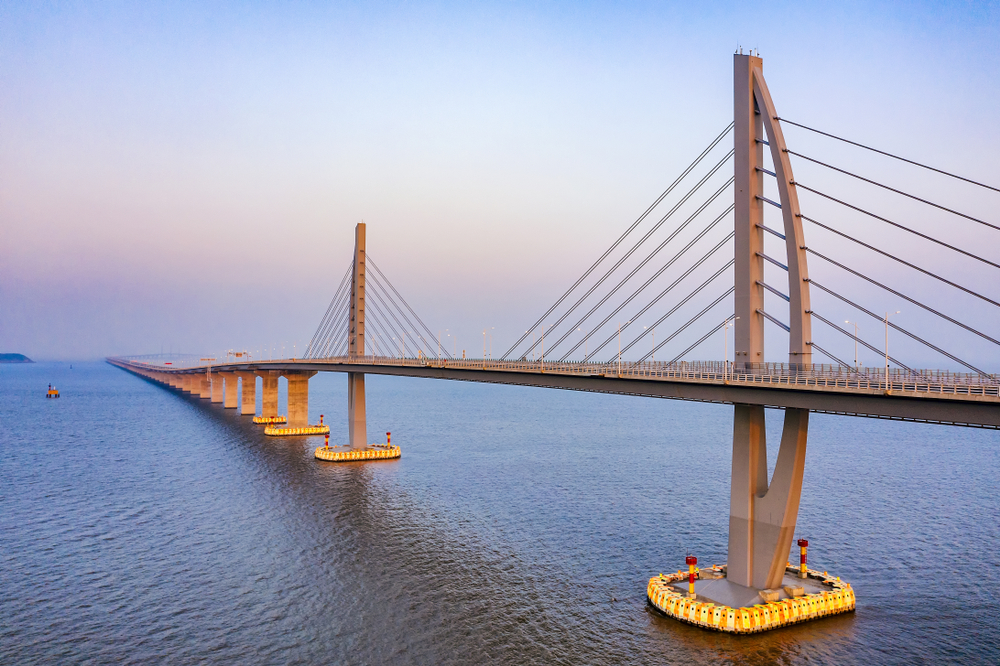 The three most famous bay area cities in the world have one thing in common: They all have at least one well-known bridge of their own.

The San Francisco Bay Area boasts the Golden Gate and San Francisco-Oakland Bay Bridges. New York is home to the Verrazano-Narrows and Brooklyn Bridges. And Tokyo has the Great Seto Bridge and the Tokyo Gate Bridge.

And now, the Guangdong-Hong Kong-Macao Greater Bay Area opens the world’s longest sea bridge in China, which is 55km connecting Hong Kong (Special Administrative Region), Macau (Special Administrative Region) and Mainland China and cutting travel time from 3 hours to 30 mins. Designed to withstand earthquakes and typhoons, it was built using 400,000 tonnes of steel, enough to build 60 Eiffel Towers. The functions of the Bridge are to meet the demand of passenger and freight land transport among Hong Kong, the Mainland (particularly the region of Pearl River West) and Macao, to establish a new land transport link between the east and west banks of the Pearl River and to enhance the economic and sustainable development of the three places.

What we are going to introduce, is one of the significant auxiliary facilities for the construction of the Hong Kong-Zhuhai-Macao Bridge system project, supported by Hikvision – the vehicle monitoring and inspection system. It is one of the most pivotal support systems of the project, which applied license plate recognition technology, intelligent information collection system and the under-vehicle surveillance system.

After years spent accumulating experience and optimising technologies, the recognition algorithm for the license plates from Mainland China has grown relatively mature. However, as the license plate systems in Hong Kong and Macao are different from that in Mainland China, the recognition success rate has been suffering for some time. Aiming to re-establish effective plate recognition and maintain security, Hikvision set up an algorithm task force. In the recent six months, Hikvision provided hardware to support the operation of the new algorithm and conducted an on-site simulation test using a sample of more than 30,000 passing vehicles.

The recognition success rates of the improved video camera on license plates from Hong Kong and Macao, as well as the cross-region license plates (where both sets of plates must be recognised correctly), have reached and even surpassed the design benchmarks.

Considering the different types of vehicles that will pass through the Hong Kong-Zhuhai-Macao Bridge (drivers sit on the left in Mainland China, for example, but on the right in Hong Kong and Macao), Hikvision has customised the functions of the system, so that it can flexibly switch among various cameras to provide images with the best angle of view.

Hikvision cameras with intelligent capabilities complete intelligent information sensing quickly and easily. In this way, not only is the drivers’ identity verification process shortened, but also more efficient for data management. Moreover, large parts of the verification process that traditionally relied solely on manpower can be eliminated as well.

One of the most crucial parts of inspection is determining whether people or contraband are concealed underneath a vehicle. Relying solely on inspectors searching manually would take too much time and effort, holding up traffic and the whole inspection process. Additionally, due to the variety of motor vehicle chassis types, perfecting this element of the process is crucial.

Each traffic passage at the Hong Kong-Zhuhai-Macao Bridge Zhuhai Port is installed with a state-of-the-art system from Hikvision to guard against under-vehicle smuggling. With the high-speed scanning and imaging features of the line-scan cameras, these systems conduct real-time and high-definition image acquisition, along with accurate imaging of the underbody of vehicles.

This system is equipped with 180-degree FOV, providing no-dead-zone inspection for all types of vehicles, so that the whole picture comes through in just one image. Also, high-level waterproof and dust-proof capabilities (IP68) enable the system to withstand wind and rain. Moreover, professional software makes checking and searching vehicles much more convenient.

According to the statistics, it takes an average of three minutes for each vehicle to get inspected manually, but only several seconds with this system.

In addition, Hikvision has a number of other products and solutions being used in other systems of the Hong Kong-Zhuhai-Macao Bridge, such as the on-board security system to safeguard the drivers, the intelligent cargo inspection system specifically designed for the customs office, the integrated video security system deployed for the disposition of artificial islands, the thermal imaging dual-spectrum products used by the ports for all-weather perimeter early warning and precaution, the thermal imaging system for high-altitude patrols on embankments and more.