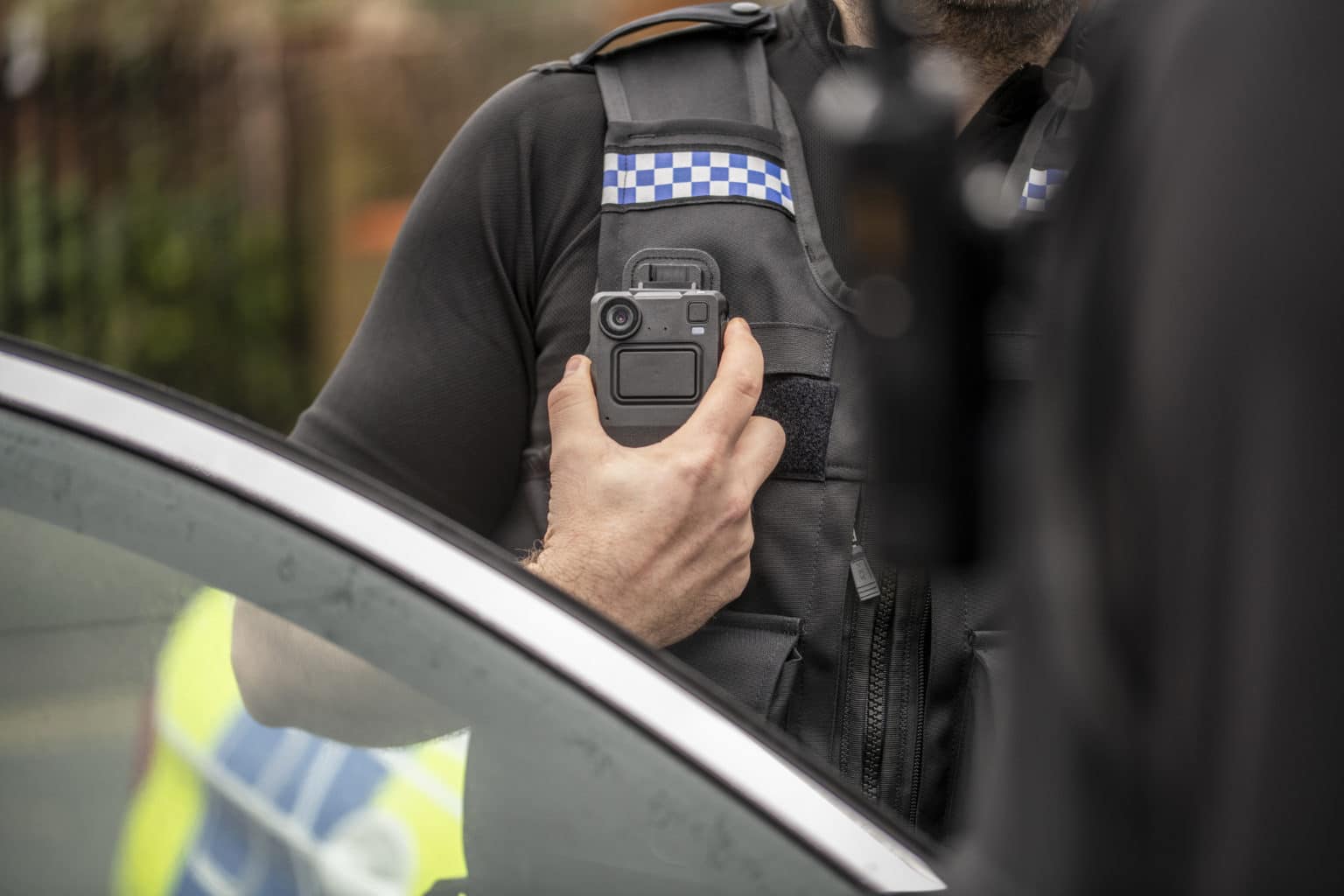 Body-worn cameras are helping to reduce violent behaviour in a number of industries, reports Motorola Solutions.

Workplace violence is rising and with that comes higher demands on security personnel and employees to ensure safety. From corporate offices and retail outlets to enforcement officers and transportation workers, video technology is engaged to deter issues such as trespassing, theft, or harmful behaviour against people and physical assets, providing accountability and enabling transparency.

While body-worn cameras are best known as an essential piece of technology that supports law enforcement, they are also becoming commonplace within enterprise markets, creating safer businesses and helping to increase efficiency. Recent studies have shown that staff utilising body-worn cameras felt that acts of violence and aggression towards them were reduced due to the presence of the camera. With lighter, smaller form-factor devices that are designed to be simple to use and easy to wear, the availability and affordability of body-worn cameras for staff is increasing.

Motorola Solutions is committed to enhancing community safety and transparency through its innovative technology and offers a range of body-worn cameras for enterprise markets, consisting of the VB400 and VT100 cameras with back-end VideoManager software. Between them, a selection of connectivity features are available to support real-time recording, streaming, camera activation and alarm generation to support the security landscape for businesses.

Not only do these devices offer a visual deterrent against acts of aggression while gathering vital evidence, but when they are paired with other security technologies, such as security cameras or radios, the body-worn camera can seamlessly act as a hands-free, real-time alerting device for any colleague in a volatile situation; enabling timely support and action.

When paired with a Video Management System (VMS) such as Avigilon’s ACC, the footage captured on a VT100 or VB400 body-worn camera can be live streamed to the VMS, where real-time video and audio from the wearer’s perspective is available to complement any CCTV footage capturing the same incident. This not only provides valuable context to a situation, but enables swift response to any escalated incident that might occur.

Similarly, as is used by leading supermarkets and convenience stores throughout the UK, the body-worn cameras can connect with an externally supported Security Operations Centre (SOC), streaming live footage to the Centre as soon as the record button is activated. This allows trained professionals to engage appropriate support, leading to more streamlined security response and provides reassurance to camera operators that the situation is being actively monitored.

Bluetooth functionality made available in the VB400 enables configurable hands-free recording, triggered by a multitude of actions. When paired with select Motorola Solutions Radios, a VB400 body-worn camera can enter a state of recording if the user’s radio emergency button is pressed, or the man down sensor is activated, ensuring that footage is still recorded in an emergency situation, regardless of whether the camera wearer is able to press record. Likewise, when Peer-Assisted Recording is engaged, all paired VB400 body-worn cameras will automatically begin recording when in range of an activated camera, capturing multiple viewpoints of the same incident, providing valuable situational awareness.

Through these integrations, body-worn cameras are providing added visibility and reassurance to those wearing them. Such streamlined solutions enable efficient and effective workflows within organisations, with minimal impact to staff and daily routine.

A camera for everyone

Where trained security professionals or prison officers might utilise the shift-long battery capacity of the VB400 with its advanced functionality and military-grade robustness, the VT100 with its lightweight form-factor, brandable ID badge and six-month standby battery life is ideal for those in customer-facing roles in retail and hospitality.

Key to many body-worn camera deployments is the flexibility of the system, something that Motorola Solutions understands and acts upon. Our body-worn camera solutions can be managed on-premises, in the cloud, or utilising a hybrid approach, maintaining the adaptability required to meet the needs of individual customers.

With RFID touch-assign, body-worn cameras can be allocated and managed in the VideoManager software without the need for camera wearers to manually log into the system, again supporting workflow and efficiency. Simply utilising a staff ID badge, one swipe of the card will allocate a user an appropriately charged and configured body-worn camera for their role, with all footage captured associated with that user for traceability. It’s all auditable and traceable within the system, adhering to stringent security practices and with encryption keys in place, footage captured on body-worn cameras is accessible only to those with appropriate approvals.

The Co-op is one of the world’s largest consumer co-operatives, owned by millions of members

and is a leading convenience retailer with more than 2,600 local, convenience and medium-sized stores in the UK. As well as having clear financial and operational objectives and employing nearly 70,000 people, the Co-op is a recognised leader thanks to its social goals and community-led programmes.

With crime increasing by more than 140% in its retail stores in 2020 and reports of 1,350 cases of violence against staff in the first six months of 2020, the Co-op is committed to keeping its colleagues and the public safe. Having launched its Safer Colleagues, Safer Communities initiative in 2018, the Co-op has shown that it is dedicated to tackling crime and violence and protecting its staff.

The Safer Colleagues, Safer Communities campaign has seen the Co-op invest £70m in security, crime prevention and colleague safety measures in a three-year period, a level of funding that they have committed to maintaining in coming years. While traditional video security has successfully provided in-store surveillance, Co-op recognised the technology’s limitations in providing proactive support to its staff and sought to invest in new technology that was connected, innovative and available for the workforce.

The Motorola Solutions VT100 body-worn camera for retail environments was the technology of choice for the Co-op. It is an integrated, connected solution that enables immediate response to acts of violence and aggression against staff members; it is simple to use, requires minimal training and deters anti-social behaviour from the outset.

The VT100 offers the features required to allow colleagues to feel safer and more confident in their roles. This lightweight recording device is worn on the uniform of store staff and is activated with the simple push of a button. Should a Co-op worker feel threatened, simply activating the VT100 instantly enables a live stream of the incident to be shared with Co-op’s Security Operations Centre (SOC) managed by Mitie, their security services provider. At this time, trained personnel can assess the situation in real-time, dispatching police support where necessary. All footage captured on the VT100 during an incident is stored securely to the device, where it is later offloaded to VideoManager, Motorola Solutions software for managing body-worn camera footage and users.

Colston Davidge Store Manager, Westbury – Bristol demonstrates how body-worn cameras can positively contribute to the staff’s sense of security as frontline workers: ”I can speak from personal experience that just having a body cam there makes me feel so much safer. Just knowing I have it to hand gives me the confidence that whatever happens is recorded for evidence. People notice it too, it stops stuff from even happening in the first place.”

Initially, the Co-op trialled VT100 body-worn cameras in 50 stores which were identified to be the most badly impacted by crime. Subsequently, Motorola Solutions was awarded a contract to supply an additional 200 stores with this integrated video solution, which has since risen to 550 stores in 2021. In Jo Whitfield, Retail Chief Executive’s own words: “Nothing is more important than protecting our colleagues now and in the future.”

like ID badges. They provide evidential-quality HD video footage for viewing by security staff and sharing with prosecution when required. These easy-to-use cameras have a six-month standby battery life meaning that staff doesn’t need to worry about charging the device often and no training is required to operate.

The Motorola Solutions VB400 body-worn camera has been designed for frontline workers who regularly encounter threats of abuse. With its rugged exterior and shift-long recording, the VB400 provides footage of events as they occur, allowing immediate response and providing indisputable evidence.

When implemented alongside fixed-video deployments and integrated with Avigilon Control Center (ACC), activation of a VB400 camera generates a motion start event in ACC software and displays the camera’s live video feed to the system operator alongside video feeds from fixed cameras.

With its ruggedised exterior, IP67 rating and selection of mounts and fixings to accommodate any uniform type, the VB400 was built for durability and was tested to military standards and proved to be robust enough for any situation. The VB 400 allows for pre and post-record captures a continuous loop of audio and video before the moment the camera starts recording, helping to ensure users never miss important interactions.

Wearing a VB400 can deter aggression and alter behavior before situations escalate. In instances where footage is required for evidence, video captured provides an unbiased view in 1080p HD. It’s an easy-to-use device, from assigning a camera and recording footage to offloading video and creating incidents and cases, the VB400 & associated software are user-friendly, easy to integrate and designed for everyday use.

Motorola Solutions Body-Worn cameras are cost-effective, you can use up to 16 body-worn camera channels supported for one ACC license.

The French Ministry of the Interior recently chose Motorola Solutions to modernise frontline policing with 30,000 Body-Worn Cameras. “After a rigorous testing and competitive process, our solutions ranked superior in performance, usability and the ability to seamlessly integrate into the workflows of France’s frontline police. We are proud to be their chosen partner and are committed to ongoing innovation with the French Government.” said Jack Molloy, Executive Vice President, Product and Worldwide Sales at Motorola Solutions.

Also within Europe, the Romanian Police and Romanian Border Police have, too, invested in Motorola Solutions’ body-worn technology, purchasing 12,000 and 3,000 devices respectively. Speaking on the use of body-worn technology, Liviu Bute, the General Inspector of the Romanian Border Police said: “It is a priority for our institution that during specific control missions at the country borders, both the Romanian border police officer who is enforcing the law and any citizen who is complying and crossing the border, feel protected and respected. Using the new body-worn camera solution will help to prove that the border police officer is managing the operational situation with impeccable conduct and at the same time, the citizens and individuals crossing can feel protected.”

This article was originally published in the November 2021 edition of International Security Journal. Pick up your FREE digital edition here