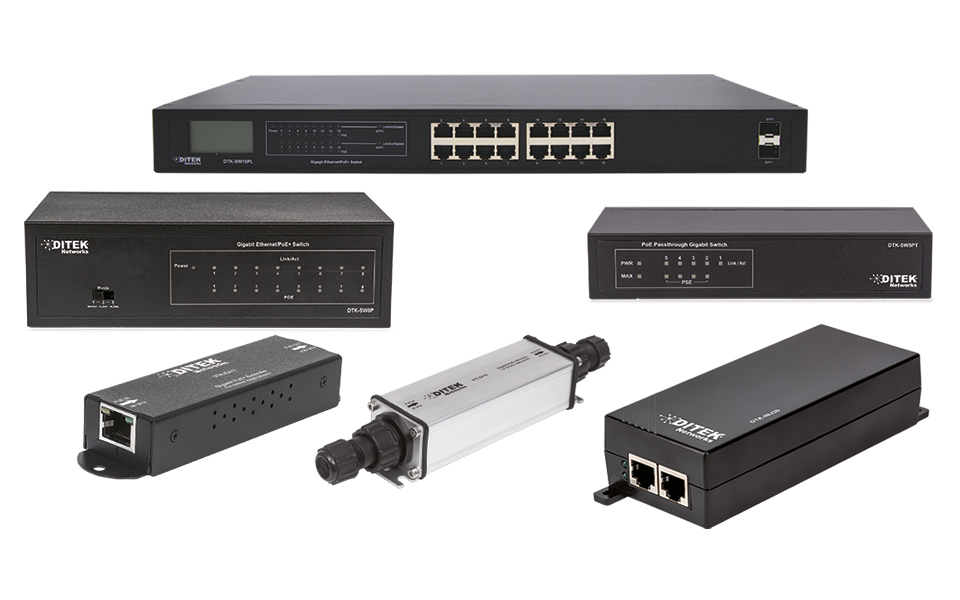 DITEK has been protecting networks for more than three decades with cutting-edge surge protection products. The company has announced the launch of the DITEK Networks product line to provide networking hardware including Power over Ethernet network switches, extenders and injectors. Adhering to the same exacting standards as the DITEK surge protection products, this new line gives IT professionals and security integrators a new choice for cost-efficient, easy-to-install powered networks.

The launch of this entirely new line of PoE switches, injectors and extenders from DITEK Networks promises to save on installation time and cost by delivering data and power over existing network cables, while including both environmentally-friendly and user-friendly features. Applications include VoIP PoE Phones, wireless PoE Access Points and PoE Network Cameras. All the new switches are able to use existing network cables and feature Green Ethernet power saving technology that deactivates unused ports and adjusts power levels.

“Our switches incorporate green Ethernet power-saving technology that deactivates unused ports and adjusts power levels based on the cable length. Rack-mount models are equipped with an innovative LCD display on the front that provides real-time power information,” said Rich Mitchell, Technical Sales Engineer for DITEK. “Our injectors and extenders eliminate the need to run AC power lines for your wireless access point, network camera or IP phone. Simply connect the PoE injector to the LAN switch port and use the existing infrastructure cabling to deliver DC power as well as to transfer data. Increase an existing PoE connection beyond the 100m (328 ft.) limit by installing one of our PoE extenders.”

Rack Mount Gigabit PoE+ Switch features an innovative LCD display and will support up to 30 watts of power per port while delivering network speeds of up to 1 Gbps. Three models are available: DTK-SW8PL with 8 Ports, DTK-SW16PL with 16 Ports and DTK-SW24PL with 24 Ports.

Port-isolating Gigabit PoE+ Switch only allows access to the uplink port and isolates all ports from each other (sometimes referred to as “Private VLAN”). The DTK-SW8P has 8 ports.

DITEK’s new line of Gigabit PoE+ Injectors supply power and a network connection to wireless access points, IP phones, network cameras or any IEEE802.3af/at powered device and support distances up to 100m (328 ft.). The Injectors come in 30- and 60-Watt models, enough for even power-hungry PoE devices.

DTK-INJ30 is the 30-Watt solution, letting you connect an IEEE 802.3af/at- compliant product to a non-PoE LAN switch port.

DTK-INJ60 is the 60-Watt model that uses all four pairs of twisted-pair Cat5 or Cat6 cabling to support IoT applications. The Ultra PoE standard is an excellent solution for bringing power to key critical systems.

DITEK’s new line of Gigabit PoE+ Extenders will increase connection distances from a PoE source to an output device up to 100m (328 ft.) via Cat5e or Cat6 cable. Even longer distances can be reached by cascading up to five extenders.

DTK-EXTI in the indoor Gigabit PoE+ Extender Repeater. It does not need an additional power supply, as it draws the power it needs from the PoE input and has a simple “plug and play” installation.

DTK-EXTO extends the range of a PoE connection – even in harsh outdoor conditions. As with the interior model, this outdoor model can extend coverage by cascading up to five extenders and does not need an additional power supply. This device is IP65 rated-waterproof and dust tight.