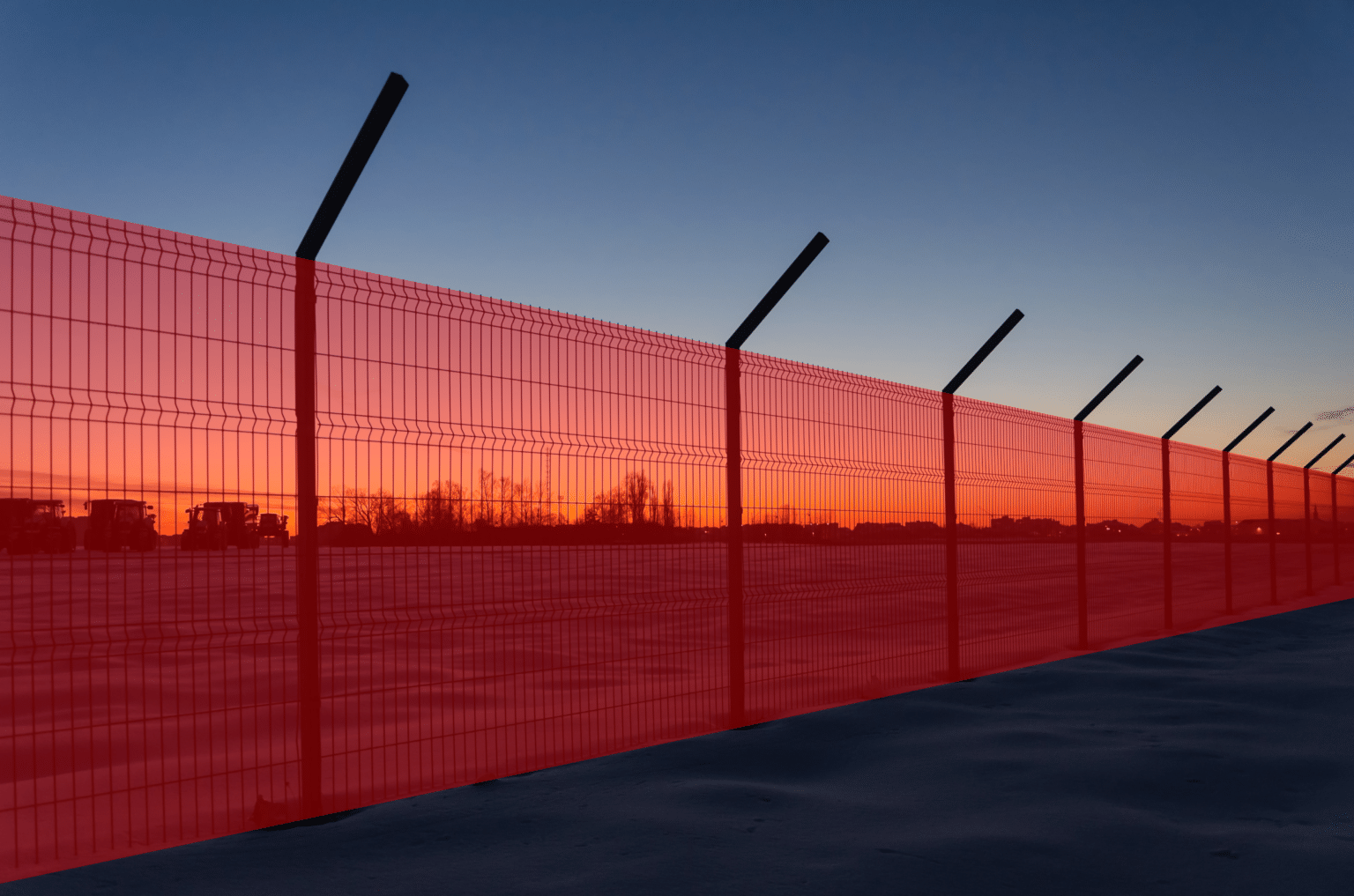 Securing large perimeters can often be challenging and requires a suitable choice of technology, reports OPTEX.

The effectiveness of a perimeter security system fundamentally rests on its ability to detect an intruder at the first opportunity. The sooner the intruder is located, the faster the situation can be verified and the event dealt with. This is particularly important when securing large perimeters or areas, where intruders are often more difficult to spot. Narrowing down the intrusion area is mainly achieved by creating detection zones which work in conjunction with camera pre-sets to help security teams verify and to a certain extent, track intruders.

But is ‘zone’ location precise enough to give the level of performance required? Or is there a need for a higher level of precision, to be able to precisely locate an intruder to within 5m, 1m or even the exact X/Y coordinates?

Data centres, distribution centres, manufacturing plants and transportation hubs are all getting bigger and all examples of industries which, to improve efficiency, are choosing to have fewer, but larger locations. Logistics is one of the most prevalent sectors embracing this trend. A well-known online retailer’s fulfilment centre in Scotland is so big it could hold 14 football pitches, with a perimeter fence all around.

Locating an intruder within a perimeter of tens of kilometres can be a real challenge for security teams. Narrowing down the position of the intruder to a 100m wide zone within a 4km fence will certainly help, but by the time the 100m zone has been scanned by cameras, the intruder may have already moved away from that area. The ability to identify the exact location of the intrusion such that it can be visually verified is significantly quicker because cameras can look precisely to the point where the intruders are and track them throughout the protected area.

Using a 100m zone length is an industry standard in perimeter protection. The set-up of these will vary depending on the site, but most use a physical fence or wall alongside an electronic intrusion detection system. Fibre optics are often deployed on a fence to detect intruders climbing over, crawling under or cutting the fence. The 100m detection zone will typically feature a CCTV camera for every 50m the fence extends. When perimeter walls are in place, active infrared beams could detect people attempting to go over the wall and LiDAR technology can create a virtual protection for the wall itself.

If smaller zones are required to provide a quicker response, the question will always be can it be achieved with the same detection equipment or is additional equipment and infrastructure required? Detection equipment with no ‘digital zoning’ will require more units to cover more zones but other equipment can offer a number of independent zones within the detection range allowing to create smaller zones with no additional infrastructure or equipment cost. This is the case, for instance, with some LiDAR sensors which can offer up to eight independent zones. A 100m range LiDAR sensor could provide eight zones of 12.5m making the visual monitoring and verification far quicker for security staff. The advantage of virtual zoning is it can be redefined with the configuration software to meet new requirements.

When does point location make sense?

Within a perimeter, there are some critical areas where the risk of a breach is significantly higher for security reasons or business continuity. It could be a potential weak point in the perimeter: such as an access gate or turnstile where an intrusion is more likely to be attempted. Critical assets, such as storage tanks and generators or substations, just beyond the perimeter line are also at risk and it is therefore critical to act very quickly to prevent major damage or theft from occurring. Being able to pinpoint exactly where the intrusion takes place will ensure the response team can act immediately.

For facilities with a perimeter greater than 5km long or for very large perimeters, such as those that protect a country’s border, it is usually more economical to utilise fibre optic point detection technology. While such technologies may be more costly, the total system cost will decrease as the length of the perimeter increases. The precision of the technology provides the security team with enough information to locate the intrusion and act quickly. It can also send surveillance drones to the area. Beyond larger premises, there are many other applications that are suited to point detection solutions.

There are several security technologies available in the market which allow point location of an intrusion. A number of fibre optic sensors can pinpoint an intrusion to a couple of metres of precision within a several kilometre perimeter. This specific technology is called Distributed Acoustic Sensor (DAS) converting a single mode fibre into thousands of extremely sensitive acoustic and vibration sensors. The most common installation would be on a fence to detect any breach by intruders climbing over it or cutting through it, but it can also be buried.

Fibre optics are widely used in energy facilities for the fact that they are unaffected by chemical or electrical elements in the environment including corrosion, EMI and lightning strikes.

Buried End-to-End Correlation (E2EC) technology is one of the latest developments in point detection. Sensors can be buried next to the perimeter line or in an open area to create an invisible perimeter line consisting of Radio Frequency (RF) energy. They identify vibrations on the ground and alert of approaching persons or vehicles, precisely identifying the location of the object to +/-1m. Buried applications can prevent a breach before it is even attempted – alerting before the actual breach to the perimeter line has happened – and has the benefit of being non-visible for intruders. The technology works in all terrains, soils, asphalt and concrete.

One of the most effective point location technologies are LiDAR sensors, which can provide the exact coordinates of where an intruder(s) is located. LiDAR typically works by what we call ‘Time of Flight’ which is when a sensor emitting pulsed light waves into the surrounding environment. These pulses bounce off surrounding objects and return to the sensor. The sensor uses the time it took for each pulse to return to the sensor to calculate the distance it travelled.

With OPTEX LiDAR technology it is also possible to configure different zones and personalise the sensitivity in each of the zones to create different detection rules. For instance, when protecting a perimeter line including an access gate, the detection for the gate can be set at a higher sensitivity to detect people tailgating a vehicle, for instance.

While offering up to eight different detection zones on 100m coverage gives a very good level of precision, the technology can provide the exact X & Y coordinates for each intruder. When the coordinates are integrated with the security software, it enables some very advanced functionalities such as precise mapping of intruders’ location and movement as well as intelligent tracking.

Radar technology can also be used to monitor wide open areas and site perimeters; and track multiple objects. Radars send out electromagnetic waves similar to wireless computer networks and mobile phones, in that same way, the pulse reflects off precipitation and sends a signal back to the radar. Once the radar’s signal hits the object it reflects to the radar helping to point where the intruder is with a precision of +/- 3 metres.

Via the software platform managing the signals received by the radar head, many filters can be applied to differentiate between targets such as vehicles and human beings and to calculate the speed and direction of travel.

With radar technology you might only want to detect and monitor beyond the perimeter line not raise an alarm. However as soon as someone breaches the set perimeter this now alerts you.

Security is an ongoing challenge and choosing the right technology will require an assessment of the security risks, the operational requirements of the site and the size of the perimeter.

How quickly can an intruder access a critical area? How quickly can the intrusion be visually verified? These factors will help determine whether zone detection can give the right level of information for a quick response, or whether a more precise point of location is required.

Point detection is one of the greatest developments in sensing technology and has an important role to play in a range of different scenarios, especially for large perimeters or areas to protect or when extreme precision is needed to protect assets. However, point location sensing systems can only deliver their full value if the functionality is integrated with a suitable management software/VMS platform which can interpret the information provided and present it in a meaningful way to the operators.