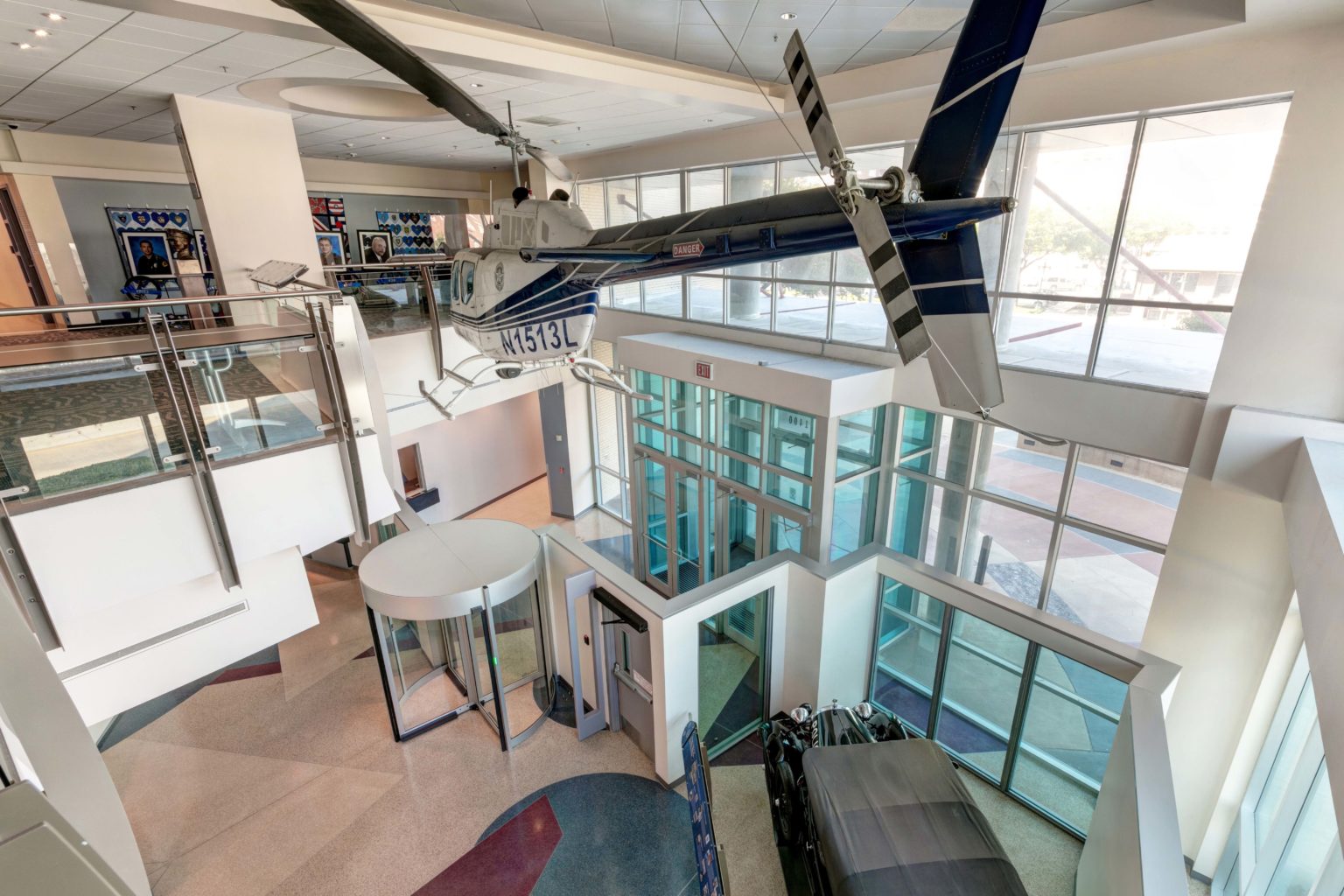 There is a saying that “Everything is bigger in Texas,” and the Dallas, Texas police department is no exception. The city of Dallas is ranked in the top ten cities in the US in terms of population, at 1.2 million people. The Dallas Police Department is the ninth largest municipal police force in the U.S., based on 3,012 sworn officers. It is led by Chief of Police, U. Reneé Hall.

The department is located in the Jack Evans Police Headquarters building, which was built in 2003. It is 358,000 square feet, has six floors, is spread over a three-acre site, has a separate 1,200 car parking garage and a two-acre, open parking lot for additional visitor parking. Prior to 2003, the department was housed in the circa 1914 former City Hall Building.

The Jack Evans Police Headquarters building was under construction when 9/11 terrorists flew airplanes into the World Trade Buildings in New York. That event was preceded by the Oklahoma City Murrah Federal Building bombing in April 1995. Therefore, security was a concern in its design. Police officials worked with a Police Design Consultant – McClaren, Wilson and Lawrie Architects of Phoenix – to help design the building to resist a terrorist attack and isolate potential hazards.

The building also needed to control visitor traffic and access. On an average month, there are 5,000 public visitors to the Jack Evans building.

In addition, shots fired at police buildings nationally are not uncommon, says Paul M. Schuster, Senior Corporal/Facilities Management for the Dallas Police Department. “For the most part they are random, single shot drive-by shootings. Often, the officers are unaware that the building has been shot at, until they find a bullet hole in the brick or glass. Increasingly, police tend to be a symbol of government and some citizens see that as a visible target to lash out at. Police officers are trained to expect the routine types of calls, such as domestic violence, traffic accidents, and other crimes. Yet they must be flexible to anticipate the non-routine that can be dangerous and change in a heartbeat.”

An active shooter incident led to an increase in security

On June 13, 2015, after midnight, a 35-year-old male placed a duffle bag with a remote-controlled bomb to detonate later between cars in the parking lot of the headquarters building. The suspect then began shooting continuously at the lobby windows. Officers responded to the scene, a vehicle chase began and the incident ended outside the city. Luckily officers in the lobby took cover and were not injured.

Following that incident, the Dallas Police Department conducted a security assessment of the building and also at seven patrol stations throughout the city. The assessment included testing various construction materials for bullet resistance to various types of weapons. Gensler Architects and Guidepost Solutions, LLC developed the solutions and plans.

“Yesterday we were concerned about handguns, today we are worried about rifles and the idea of terrorism is always present with outright attack or bombs,” Schuster notes. “The police officers and police staff only want a place that is safe and where they can do their good work.”

Funding of US$1.3 million was approved to upgrade the lobbies of the seven patrol stations to withstand rifle rounds, and US$1.9 million to improve headquarters lobby security, and to upgrade an aging security system. Turner Construction Company and Convergint Technologies, LLC conducted the renovations and security technology integration.

Challenges to the security design

The headquarter’s lobby was initially designed as a two-storey glass-walled structure, with an information desk and public records service windows. Visitors were allowed free entry into the lobby and were only screened in an open area to the side if going to other floors.

“The challenge in upgrading lobby security was the two-storey lobby entrance glass. The glass was not bullet rated, due to budget constraints. Changing the front of the building to support ballistic rifle-rated glass would have caused extensive time, exposed the inside of the lobby to weather and would not have solved all of the security issues,” Schuster says.

“In addition, there were concerns about keeping an ‘open’ and friendly service concept in mind and ensuring that the lobby would not resemble a ‘fortress’,” Schuster notes.

The solution was to keep the existing exterior unchanged and focus on adding a layer of security once a person enters the lobby. Visitors now enter the headquarters and immediately proceed to a side room where security screening is conducted. A new secondary wall with bullet-rated glass and solid bullet resistant wall materials was constructed inside the lobby to channel visitors to the room. Once inside the screening room, which also has bullet resistant walls, the visitor has belongings x-rayed and they walk through a metal detector. In the event that anyone was to produce a gun and begin shooting, the incident could be contained inside that room.

Once a visitor has been cleared, they proceed into the main lobby via a Boon Edam Tourlock 180+90 security revolving door. This automatic, four-wing door is the most advanced security revolving door in the Boon Edam product range that offers maximum throughput, allowing users to enter and leave the building simultaneously. In the event that a large number of persons try to force their way into the facility, the Tourlock 180+90 will determine that more than one person is trying to enter and will reject the person and lock out any others from entering.

Once a visitor is ready to leave the lobby and exit the building, they pass through another Boon Edam Tourlock 180+90 that leads to a vestibule with exterior swinging doors. In the event that someone tries to go back into the lobby from the front vestibule area, without going through the security screening room, the Tourlock security revolving door will reject their entry.

The Jack Evans Headquarters security upgrades for the lobby improved security and still kept the best aspects of the lobby design, including the antique police car and the overhead police helicopter. The Boon Edam security revolving doors accurately prevent both tailgating and piggybacking and provide the department with maximum security while controlling traffic flow.

“While it would be great to have a building totally open to the public and then add security as needed, such is not the world we live in anymore,” Schuster adds.

Future security plans include exterior site security upgrades to the patrol stations and the headquarters to include security fencing with card access controls for fleet and employee vehicles at each of the sites.

To find out more about Boon Edam, please visit www.boonedam.us