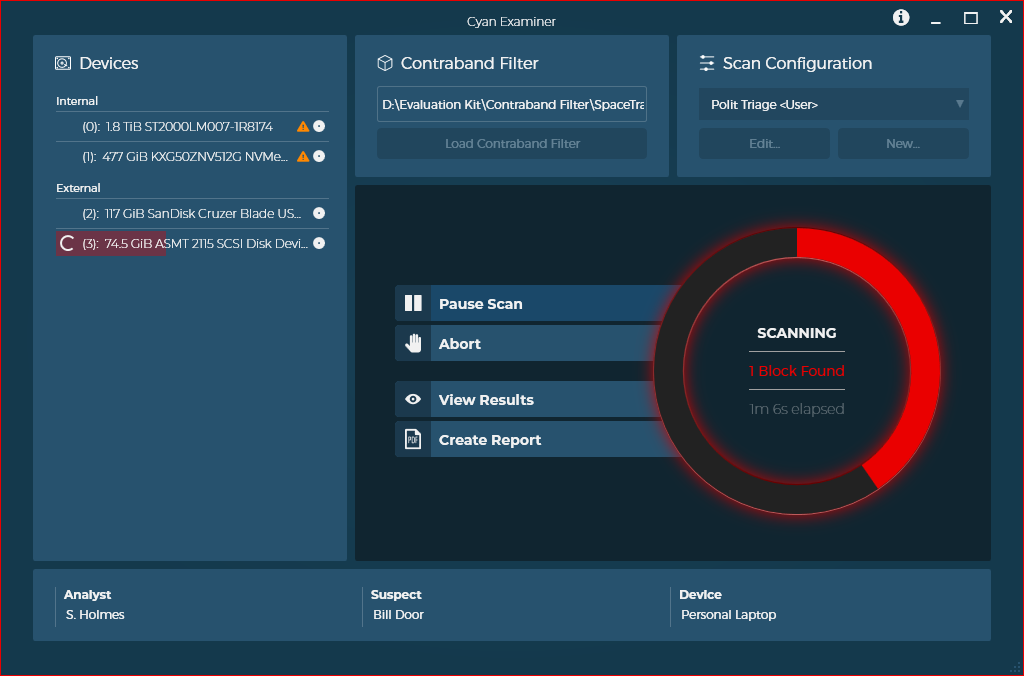 Cyan Forensics, the Edinburgh-based digital forensics startup, has announced its first partnership in America. The company’s software helps police detect indecent images of children in minutes, speeding up the time it takes to search seized devices. Its partnership with Alexandria Virginia headquartered nonprofit, the National Center for Missing & Exploited Children, is the first step to introducing its tool to social media companies, network operators and US law enforcement.

Digital evidence is vital to investigations into child sexual exploitation, but these investigations often take months due to delays. Delays are caused by backlogs of devices waiting to be searched and the amount of detailed work required to search each device. Cyan Forensics’ software quickly scans devices for any recognised content and can be used on the device before it enters the queue. It can also help to better inform officers on the ground if a suspect should be taken in for further questioning and a comprehensive digital search.

This is far more serious an issue than just the financial and time cost to the police force. Quicker decisions mean that vulnerable children can be safeguarded faster and suspects brought to justice sooner.

Cyan Forensics’ technology has been built by experts in digital forensics, originally off the back of three years of research and development with Edinburgh Napier University. The research involved CTO, Bruce Ramsay, who worked as a forensic analyst for Lothians and Borders Police and experienced the issues of forensic analysis first-hand. He was joined by CEO, Ian Stevenson during the commercial phase of the research project, which resulted in the two spinning the company out and forming Cyan Forensics in 2016.

NCMEC’s CyberTipline is the nation’s centralised reporting system for child sexual exploitation. It receives reports from the public and US based internet companies like Google and Facebook. NCMEC makes information from these reports available to US law enforcement, including the FBI, Homeland Security, the Secret Service, the US Military, Internet Crimes Against Children Task Forces (ICACs) and law enforcement in over 110 countries around the world. In 2018, NCMEC received more than 18.4 million reports to its CyberTipline.

Cyan Forensics’ Co-Founder and CEO, Ian Stevenson commented: “This is a partnership of shared values and we are delighted to be working with such a respected force in the fight against child abduction, abuse and exploitation. Cyan Forensics can support NCMEC with the great work it is already doing to help protect children both on and offline. We are proud to be associated with an organisation at the forefront of the field and look forward to discussing how we can help other future partners across America.”

John Clark, President and CEO of NCMEC added: “Timing is often critical in these cases and we’re excited at the prospect of new technology that could provide faster access to information that will help rescue children from abuse. Cyan Forensics’ technology has the power to make a big impact in the fight against online child sexual abuse imagery.”

As part of the partnership Cyan Forensics and NCMEC will work together to evaluate Cyan Forensics’ technology and its ability to detect images already known to NCMEC.

The Home Office recently announced Cyan Forensics as a tool that will be made available to police forces across the UK. One of three pioneering new tools to be rolled out in the fight against child abusers, Cyan Forensics will play a key part in improving the capability of the Child Abuse Image Database (CAID). Forces across the UK will have access to the new tools, which will speed up investigations of online child abuse and limit the number of indecent images of children (IIOC) police officers have to view. You can see more on this announcement, here.

Cyan Forensics’ was recently announced as part of the latest cohort to join the GovStart 2019 Accelerator programme in the UK. Govstart is a growth programme to help tech startups transform the public sector.

For more information go to: https://www.cyanforensics.com/