BSIA calls for cash to be a ‘safe choice’ of payment 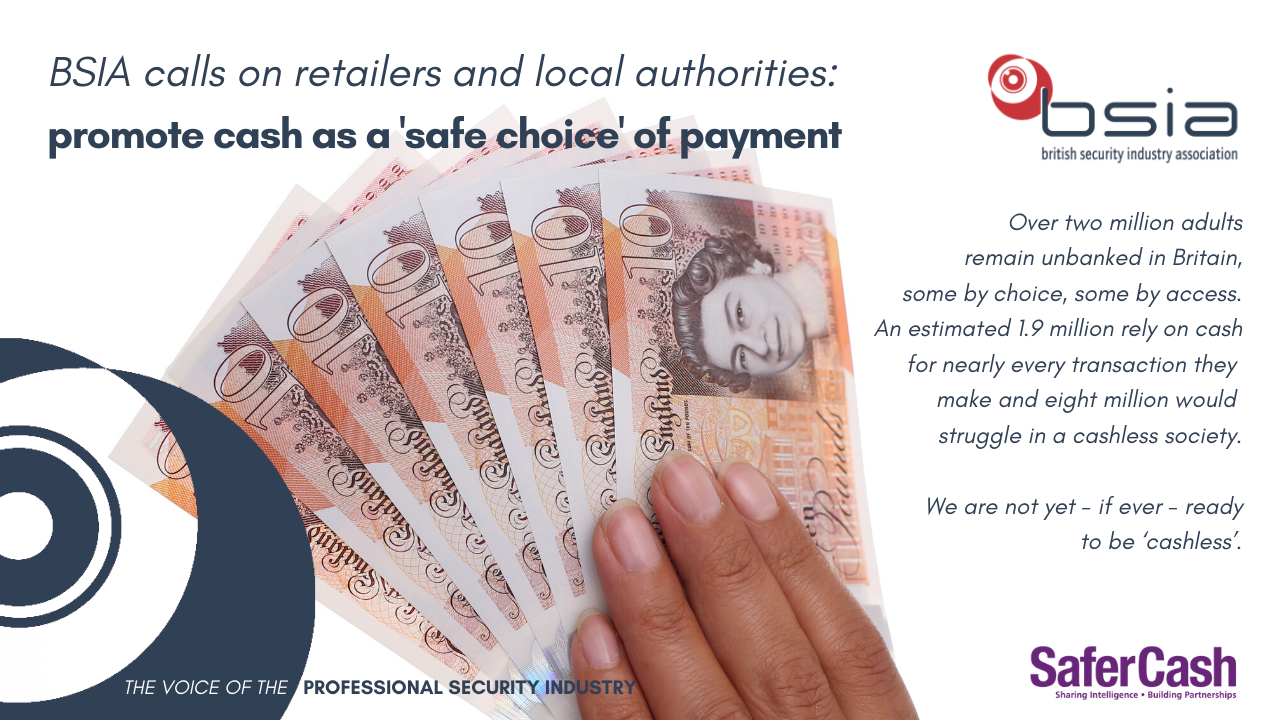 The British Security Industry Association (BSIA) is calling on retailers in all sectors and local authorities across the United Kingdom to recognise, acknowledge and to promote the use of cash as a safe choice of payment during and after the COVID-19 crisis.

As the Association that represents the UK’s cash-in-transit industry, the BSIA has produced a report ‘Cash is a Safe Choice’, a compendium of evidence-based research from organisations such as; the British Retail Consortium, the World Health Organisation, Which?, Association of Convenience Stores, UK Finance and members of the cash industry. The report outlines the current approach that cash is to be avoided as a credible transactional tool as the public return to shopping centres and hospitality not only lacks credibility but also takes away choice from the consumer and poses a serious threat to the cash-in-transit industry and the recovery of the UK economy.

The report discusses that the United Kingdom still comprehensively uses cash as a method of transaction and that, although there has been a decrease for a number of years, it is still necessary for some and a choice for everyone who wishes to get access to it. In addition, the report states clearly that in the light of the COVID-19 pandemic, there is little or any evidence that using cash can spread Coronavirus, as well as highlighting the work that members of the industry are carrying out to keep cash in circulation as a safe choice.

Sarah Staff, Head of SaferCash, BSIA said: “Over two million adults remain unbanked in Britain, some by choice, some by access. An estimated 1.9 million rely on cash for nearly every transaction they make, and eight million would struggle in a cashless society. Our Cash is a Safe Choice report shows we are not yet – if ever – ready to be ‘cashless’, as many media reports are referencing.

“The public are being swayed with constant marketing and reminders to pay by card to ditch cash, shop online and keep things digital. But how does this leave these communities who not only rely on cash but the many who also use cash as alternative payment – taking away cash is taking away choice of a valid transactional method and we are calling on all retailers and local authorities to pull back from taking hard currency out of the equation and to put in place information that supports this.”

The report highlights that ‘cash is…’:

Secure – It minimises risk as digital accounts are vulnerable to cybercrime, fraud and power outages. It protects the privacy of the user and it is resilient – during a crisis we trust real currency – cash is a top recommended emergency item.

Accessible – The UK Government and Chancellor Rishi Sunak promised in March 2020 to create legislation to protect access to cash. Cash also keeps growing as the demand increases globally both in absolute value and relative to GDP.

Fee-free – There are no costs for consumers using cash – it is pure tangible money.

Everyone – History shows human beings have used tangible monetary systems since the Stone Age, it is democratic and inclusive, universal and a freedom of choice.

Mike Reddington, Chief Executive, BSIA, said: “The Cash is a Safe Choice report clearly demonstrates that there is still an appetite for the general public to use cash as an alternative method of paying, even during the COVID-19 crisis.

“With such a body of evidence that clearly contradicts the current misconceptions, we believe the death of cash is completely unfounded, exaggerated and, more importantly, detrimental to a great many people and businesses which, as we try to recover from the aftershocks of COVID-19, is misleading and incredibly damaging to the cash industry and the economy as a whole.”

Cash is a Safe Choice is available from the BSIA website.