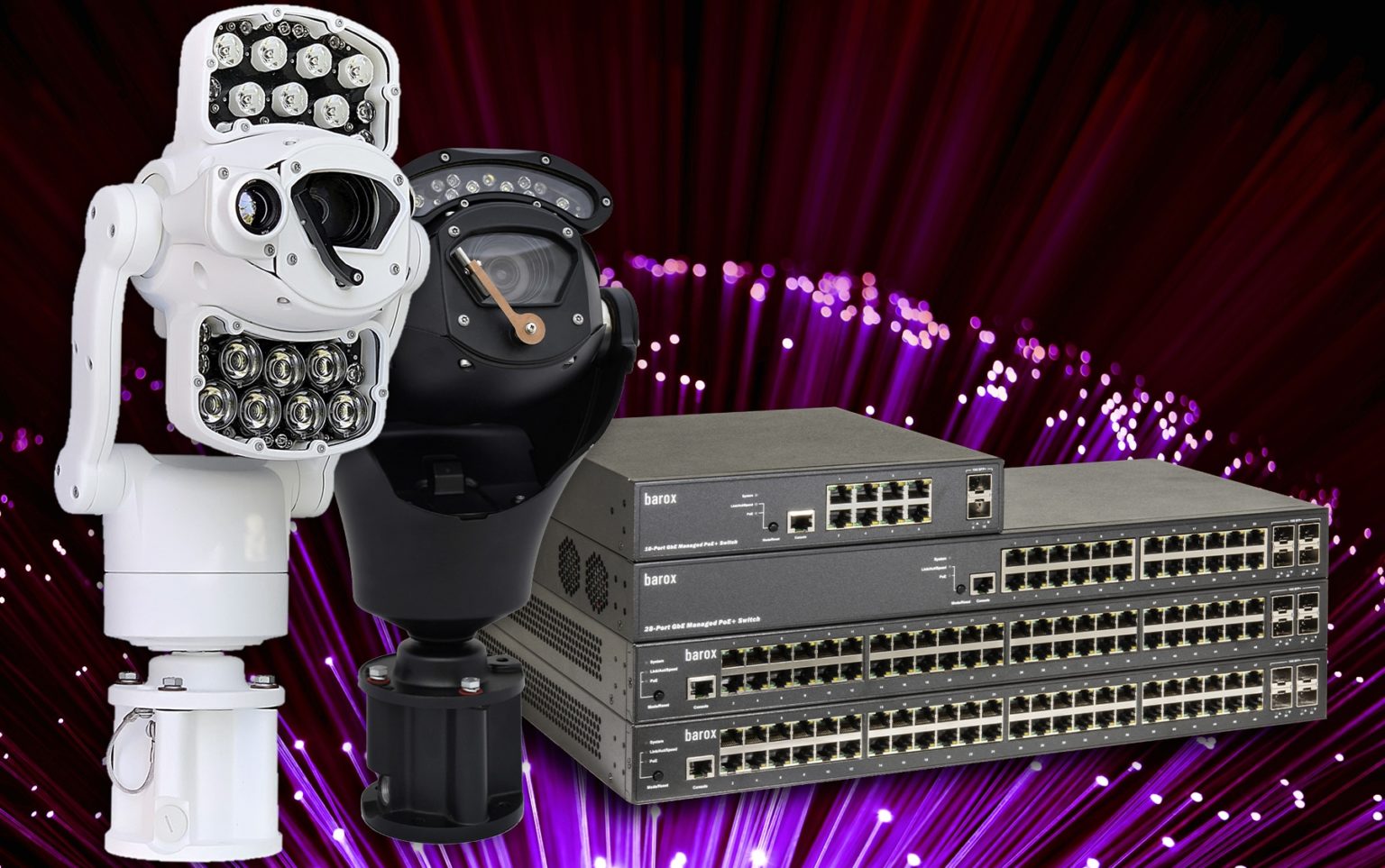 360 Vision Technology, the UK manufacturer of rugged HD, radar and thermal PTZ imaging cameras, has partnered with barox, the manufacturer of professional standard switches, PoE media converters and IP extenders, to support installers and specifiers by confirming its range of PoE Ethernet switch products are suitable to power 360 Vision’s range of PTZ cameras and peripherals.

To support CCTV surveillance integrators with the specification and set-up of reliable PoE and video transmission when installing their range of PTZ cameras, 360 Vision recently concluded an in-depth ‘proof of concept’ test. The testing involved a barox RY-LGSPTR23-26 24-port 920W bt PoE managed Ethernet switch and was performed to assess device performance and compatibility with 360 Vision’s range of PoE Predator and Invictus PTZ cameras.

In the compliance test, a sample barox switch was assessed for its reliable delivery of PoE power to a variety of Predator, Invictus and radar PTZ cameras and fully loaded with operating wipers, white light and infrared illuminators. “The barox PoE switch test yielded excellent results, with non-stop PoE being supplied to the 360 Vision cameras and illuminators sustained by the barox switch,” confirmed Craig Carton, Customer Service Technical Support Manager at 360 Vision Technology.

“Testing the switch via a VMS, on connection of a camera, the barox switch auto-detected the PTZ device and auto set-up its power management, without any intervention from us. Along with true Plug and Play connectivity, the switch delivered excellent quality video and data over simulated network conditions,” he added.

The certified 360 Vision/barox PoE integration enables new PTZ camera installations to be configured and installed with complete confidence. Specifically designed to cater for the demands of heavy video and PoE applications, the barox switch range can support any number of 360 Vision PoE cameras, supplying 30, 60 or 90 Watts PoE in compliance with IEEE802.3af/at/bt.

The use of barox switches to supply PoE also allows remote ‘on and off’ powering to 360 Vision cameras via a VMS, whereas this can only be achieved manually when using an injector – by having to send an engineer out to site. For example, if a system loses its mains power supply, temporary back-up power can be provided via a UPS battery pack.

However, if the loss of mains power is prolonged, the local battery power can become depleted and the system blacks out. In this scenario, it would be ideal to prevent the total loss of power and system down-time by remotely switching off certain cameras and/or illuminators – to conserve battery power and maintain the operation of critical cameras. Unlike with simple network PoE injectors, by using barox switches and their efficient PoE management, cameras and illuminators can be automatically controlled, to extend battery autonomy and maintain critical video surveillance footage.

In addition, barox switches employ a clever ‘staged power-up’ to avoid overloading the switch when multiple cameras are connected and to assist with fault diagnosis, they provide a systems topology schematic of all connected devices on the network.

“barox is proud to be associated with a UK surveillance camera manufacturer the calibre of 360 Vision Technology,” says Rudolf Rohr, barox Co-Founder and Managing partner.

“Providing maximum installation versatility, fast and simple set-up and advanced cybersecurity, the range of barox PoE Ethernet switches can provide the perfect fit for integration to the Predator and Invictus cameras, to deliver the highest levels of surveillance imaging, video transmission and reliable PoE delivery.”

“We are delighted with the excellent performance results of the 360 Vision/barox PoE integration test and the ability of the barox range to supply extremely reliable and robust PoE for our range of Predator and Invictus PTZ cameras and illuminators,” says Sara Fisher, 360 Vision Technology’s Sales Director.

For more information on the full range of rugged PTZ surveillance, HD, thermal and radar imaging cameras, customers can visit their website at: www.360visiontechnology.com