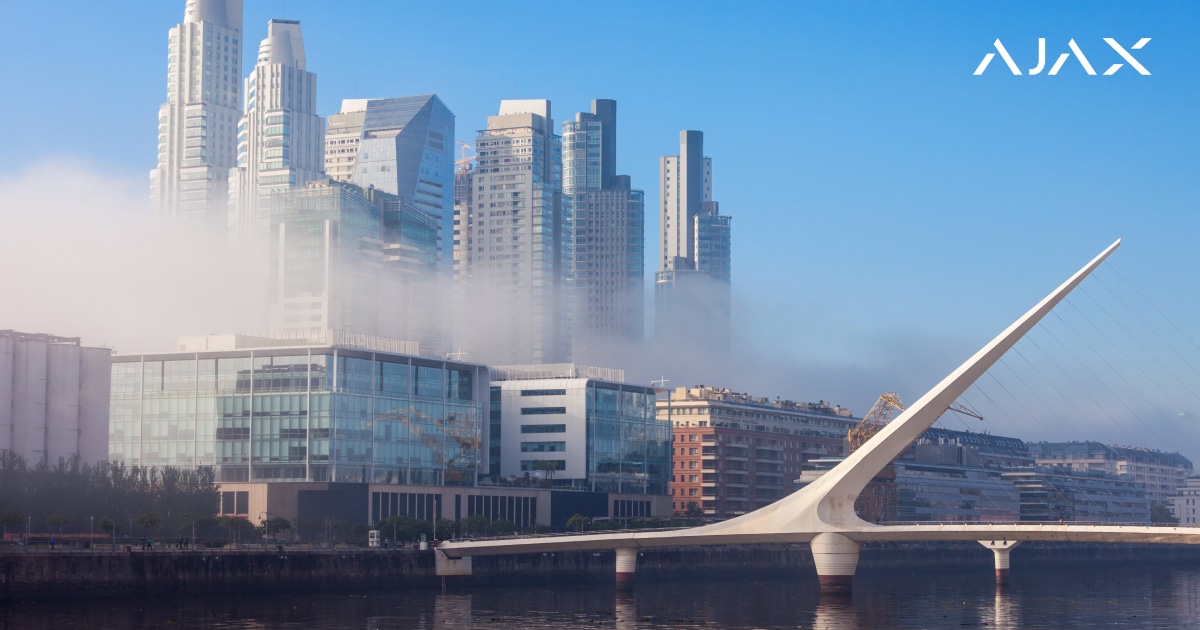 Ajax Systems, the largest manufacturer of professional security systems in Europe, is entering the Argentina market. The company plans to enhance its influence in the region and build a local team.

The recent receiving of FCC and IC certificates has allowed Ajax Systems to spread to new regions where the 915 MHz frequency band is used. This involves expansion in the markets of Latin America, the US, Canada, Australia and Southeast Asia in 2022.

Ajax wireless products will be available for sale from the company’s first official partner and distributor in the region, Getterson. At first, Ajax’s well-known Jeweller wireless product line will go on sale, while a new Fibra lineup of wired devices will become available over time.

“Ajax Systems has concluded an agreement with Getterson, the Argentine alarm distributor. Together, we can bring the Argentine security market to a new level with cutting-edge technology that has already revolutionised the European market. With its ease and speed of installation, Ajax provides new opportunities and higher profit both for installation and monitoring businesses,” said Diego Di Giuseppe, Sales Director for Italy, Iberia and LatAm at Ajax Systems

Beyond that, Federico Keselman has also joined Ajax Systems as a Regional Sales Manager in Argentina. Having over 24 years of experience in technology and customer service organisations, Federico is an expert in the field of security system sales.

“Hiring Federico is the first step in our strategic positioning plan. We focus on attracting local talent to offer the best service and technical support for Argentine customers,” added Diego Di Giuseppe.

Meeting the strictest industry standards, Ajax delivers the best user experience for both professionals and end users. The company’s global success has been primarily driven by its innovations, namely proprietary technologies like Jeweller, Wings and OS Malevich. Currently, Ajax protects over 1,250,000 users in 130 countries and has become the choice of more than 100,000 security professionals worldwide.

Thanks to the system’s flexibility and opportunity to provide comprehensive security regardless of the premise size or location, Ajax systems are widely implemented for protection not only of private and commercial property but also government and public facilities. The most notable projects with the Ajax systems installed include a UNESCO World Heritage Site in Norway, ​​a cell tower in Bangladesh, a railway in Switzerland, a mushroom farm in Turkey, museums in Denmark and South Africa, a 19th-century castle in Germany and even a research base in Antarctica.