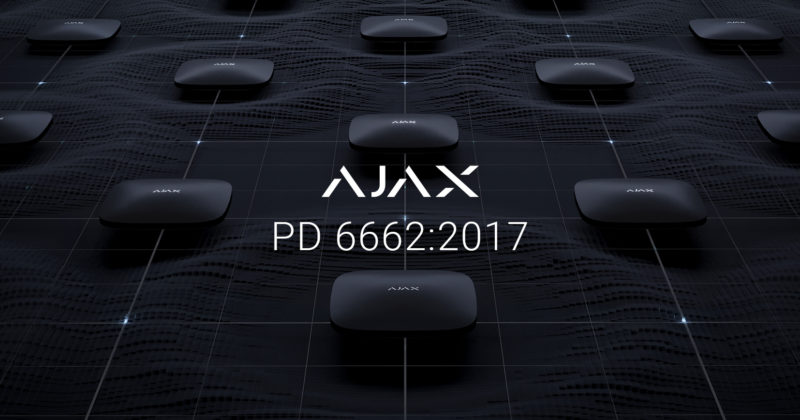 Being a professional wireless alarm, the Ajax security system meets the requirements of the highest international security standards including the European EN 50131. However, now the system has taken a step even further.

After the latest OS Malevich 2.10 update, Ajax has become compliant with the PD 6662:2017 standard providing the world’s best practices in countering false alarms. The update brought a number of new functions including:

“The compliance with PD 6662:2017 is a major milestone for Ajax Systems in the UK, not only as it truly opens the commercial market to the technology available within Ajax hub, but it demonstrates the company’s ability to respond to local market requirements. Our ability to support a URN moving forward will be a major game-changer, for Ajax, our customers and their clients and the fact that this was delivered by our amazing team in R&D within the year is quite frankly incredible,” said Steve Norman, UK Sales Leader at Ajax Systems.

PD 6662 describes the scheme for the installation and maintenance of intruder and hold-up alarm systems in the UK. It includes a list of all the European and importantly, British Standards that both designers/installers of ‘Systems’ and manufacturers of ‘Components’ need to comply with.

“While the list of European standards is extensive, they still do not cover all areas of an Intruder alarm installation as required in the UK. Just one example of this are the methods of unsetting the intruder system, which is covered in a British Standard BS 8243 and is mandatory for systems requiring a police response. These unsetting methods are designed to help minimise false alarms and are presently not included in European Standards. This is but one reason why PD 6662 is important to the UK,” explained David Roscoe, Field Operations Manager at SSAIB.

The standard is essential for any organisation or householder requiring a police response to their intruder alarm and/or confidence that their local alarm installer is competent in supplying a compliant alarm system.

“PD 6662:2017 assures customers that all alarm systems in terms of equipment and configuration will be in line with the latest European standards. This is a powerful message given the value placed on the PD 6662 scheme by the Police Services in regard to alarm response,” added Richard Jenkins, Chief Executive at NSI

To comply with the requirements of PD 6662:2017, Ajax’s R&D team has implemented not only software, but also hardware updates. In addition to new features, the company introduced DoubleButton — a new wireless hold-up device that can generate a confirmed alarm condition by a special sequence of clicks.

The device is protected from accidental activation on both hardware and software levels — which eliminates false alarms — and protected from dust and splashes (IP55 body).

PD 6662:2017 features are available to set up only in the latest versions of Ajax PRO apps. All Ajax hubs will upgrade to OS Malevich 2.10 by the end of 2020. The over-the-air update installs automatically when the system is disarmed.

All subsequently manufactured devices that comply with PD 6662:2017 will be marked with a sticker on the body and packaging. Ajax’s partners and installers will be provided with stickers to mark the devices that have already been supplied, as well as informed of SKU numbers update for the product line distributed in the UK.

Together with partners, Ajax Systems will hold a series of online training sessions on the use of new PD 6662:2017 features. More information on the webinars is available from Ajax official distributors in the UK.