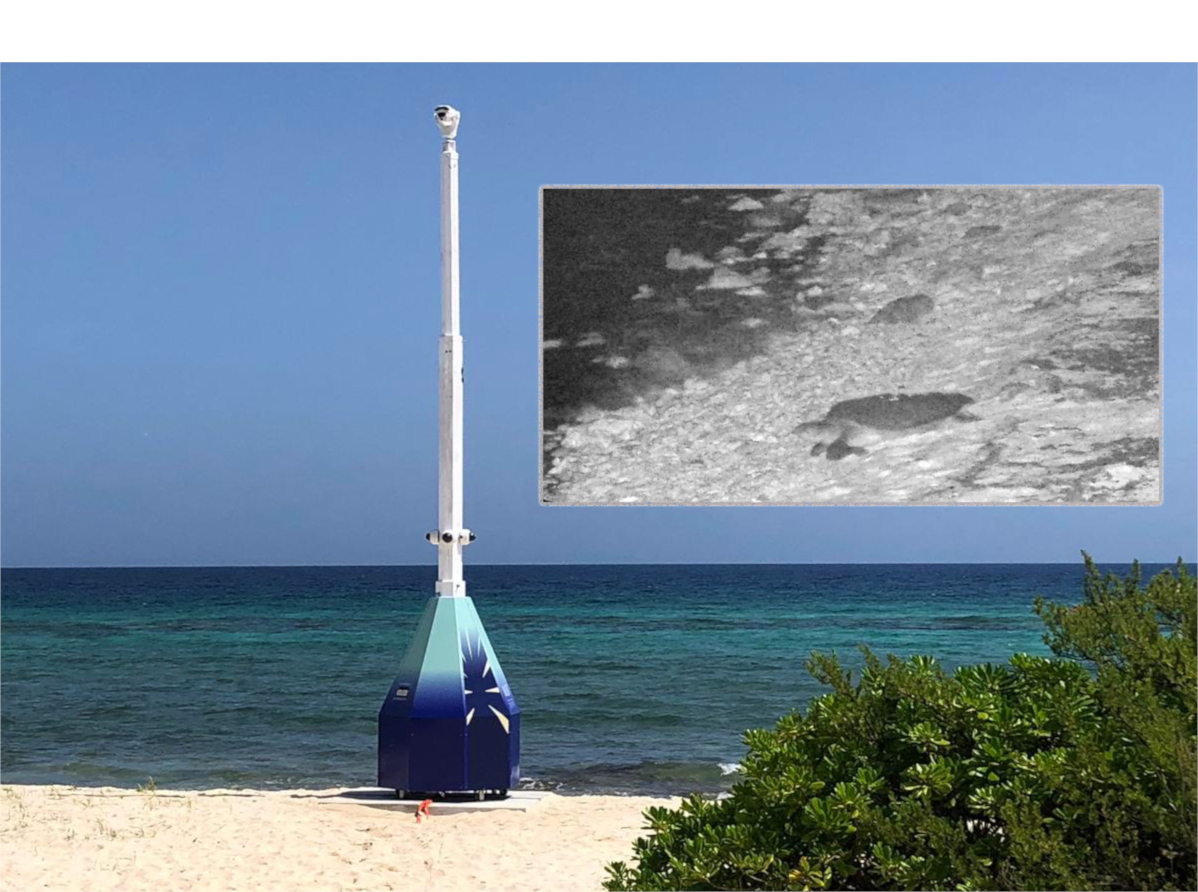 The MAST unit was deployed after a funding campaign led by Caymanian, Michael Ridley to install video surveillance at a key nesting beach at Sand Hole Road in Boatswains Bay. “Sand Hole Road is a critically important nesting beach for the female turtles, who crawl out onto the beaches to dig nests and lay eggs during the night,” Michael explains. “Unfortunately, poaching poses a constant threat to the survival of the nesting sea turtles at many locations. In addition, economic development of the island has seen more beach front property being built and a subsequent squeeze on places available for the turtles to nest safely after migrating long distances between feeding grounds.

“After analysing the Cayman Islands Department of Environment (DoE) detailed nesting data accumulated over 20 years, to identify the most vibrant turtle nesting grounds, I selected the beach to implement a pilot program to monitor nesting turtles and protect them from poaching activity. The beach site has been dubbed, ‘Turtle Beach’ and provides a perfect nesting ground for turtles due to its minimal property development, zero light pollution and enough sand and vegetation to support the turtles’ nesting activity.”

“The Invictus based MAST solution was perfect for the application at the beach,” says Stuart Bostock, Executive Group President at Security Centres International. “Featuring world-class HD surveillance imaging from the 360 Vision Invictus camera, leading-edge design, robust build, zero infrastructure requirements and seamless Video Management System (VMS) integration, MAST is the only product of its kind. It’s also 100% self-powered, using solar energy and a 100-hour back-up battery; a feature supported by the use of the low power requirements of the 360 Vision Invictus camera.”

Monitored 24/7, images from the camera enable DoE and Royal Cayman Islands Police Service (RCIPS) officers to be alerted and dispatched when nesting turtles arrive at the beach, assisting the DoE to monitor the beach and provide the highest level of protection against poaching.

“We are all very confident that the data obtained from this project will prove invaluable in assisting the DoE with their conservation efforts and assist them with their Island-wide monitoring efforts,” says Michael. “Sand Hole Road is a critically important nesting beach with poaching posing a constant threat to the survival of the sea turtles that nest there, so high-performance CCTV via the MAST solution was specified as the best way to protect them.

“The MAST system was selected for deployment on the beach due to its excellent night-time surveillance capability, operating without the need for any supporting local infrastructure. Plus, the MAST system is silent in operation, posing no environmental impact, and thanks to the 360 Vision IR LED illuminator equipped Invictus camera, the system can operate without a visible light source that may disturb, or draw unwanted attention to the turtles nesting site.”

“The Invictus camera’s unparalleled mix of competitive cost and advanced functionality make it the perfect imaging component for the innovative MAST system, where it is now providing much needed surveillance protection and research video.”

To date, the use of the MAST unit has proved a huge success in protecting the sea turtles from poachers and providing evidential video of the turtles’ feeding and nesting activity on the beach. Calculating population, nesting patterns and survival rates from the footage gained during this season, plans have already been made for additional protection measures and the extension of the MAST based surveillance program to other locations on the British West Indies island.