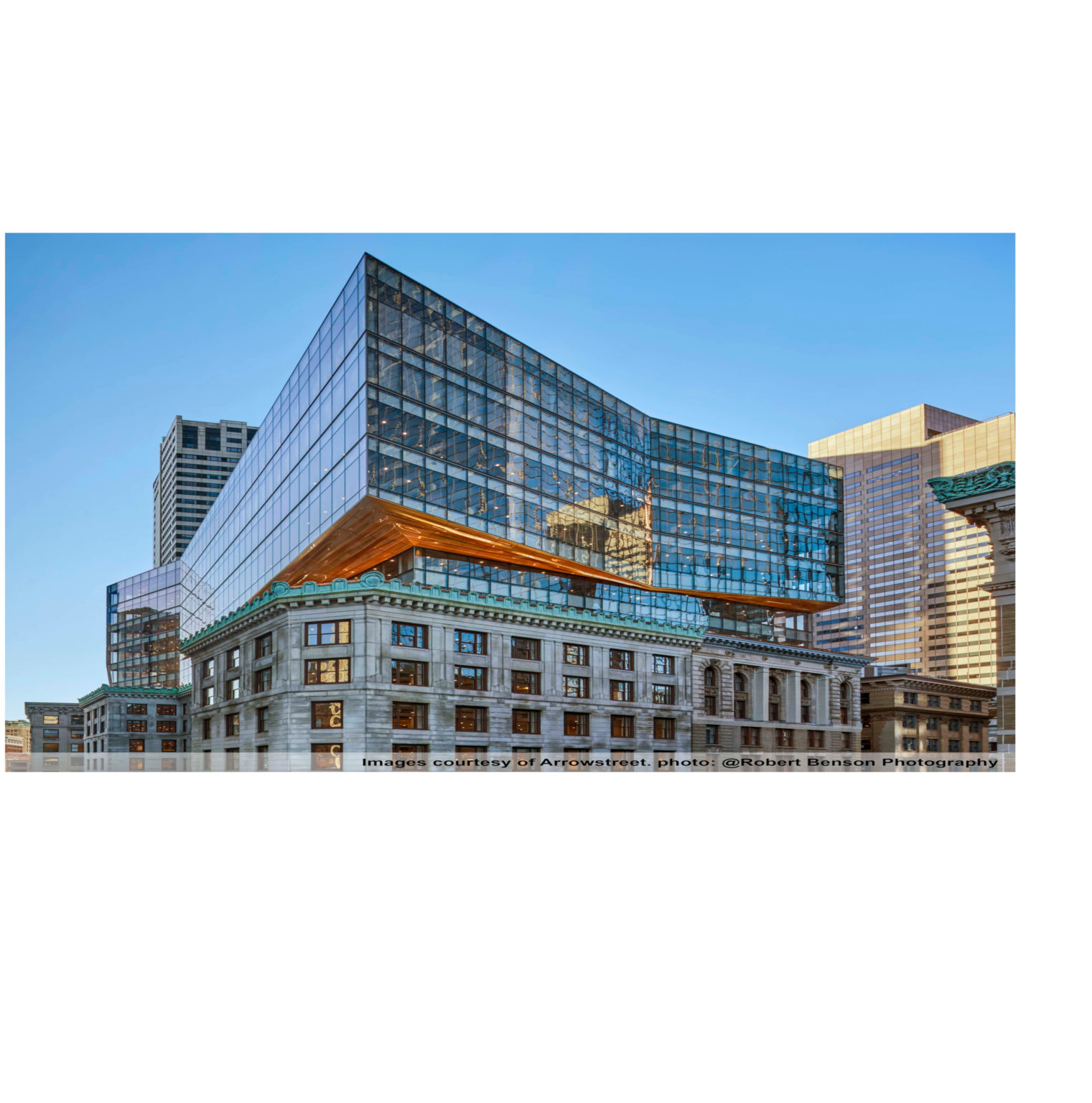 The City of Boston is known for many things – from Fenway Park to the Boston Marathon to the bar from Cheers, the city is full of iconic landmarks, events, cultural assets, education centres and more.

The City is also recognised for its vast history, especially downtown, where hundred-year-old buildings have been preserved or restored. There is also a mixture of new property development, including 33 Congress Street in the heart of the financial district, which combines the best of historical design with new construction.

33 Congress incorporates more than 400,000 square feet of office and retail space, transforming the historic neighbourhood and positioning the area as a dynamic downtown destination.

The project was designed by Arrowstreet, an award-winning architecture and design firm, and was led by Jason King, AIA, LEED, AP, BD+C, Senior Associate for Arrowstreet.

According to King, the 33 Congress Street building consisted of three different structures that were built at separate times: in 1904, 1906 and in 1922 and then all combined into one space. While the space functioned as one building, there were three separate elevator cores, sets of restrooms, sets of stairs, and more. Those entities needed to be reconfigured into one. The most striking feature of 33 Congress is a new, modern glass and steel structure, containing six additional floors of office space that sits on top of the original three masonry buildings.

Another important project goal was to upgrade the main lobby to a modern design that allowed public access, increased security for building employees and respected several historical aspects.

“We needed a way to get people into the new, main elevator lobby quickly due to the high volume of traffic that we were anticipating would take place after the redesign,” King said. “We also wanted to create an entrance that would create a better flow of entry from the sidewalk into the building.”

The original building had an existing revolving door, but it was small and surrounded by stone. “It was dark and uninviting,” King said. “We were creating an open and airy Class A lobby space and wanted visitors to clearly see the ornate, coffered ceiling and experience the grand and historic nature of the lobby as they entered.”

King implemented a Boon Edam Crystal TQ manual revolving door to lead visitors in the double height lobby space. The Crystal TQ is constructed virtually completely from glass with only a few stainless steel accents to ensure the solidity of the revolving door. It fits seamlessly with modern glass facades but can also be a beautiful eye catcher in more traditional or classic designs.

For employee access, the building’s previous design did not incorporate turnstiles to the elevator banks. “The building did have card reader access, but only at certain doors and locations,” King said.

King installed four lanes of Boon Edam Lifeline Speedlane Swing optical turnstiles and two Winglock Swing model access gates to provide secure employee access to the building’s upper floors. The Lifeline Speedlane Swing turnstile manages and channels the flow of people entering and moving around buildings. It employs sensors that detect visitors approaching, with pulsing light strips to guide the user. A sleep function saves on energy use. It can be customised with dimensional and glass choices, including corporate identity colours or other options, so that it either blends-in or stands-out from its surroundings.

The Boon Edam Winglock Swing is constructed from stainless steel and a single glass panel and is unobtrusive in nature and design. The access gate easily manages bi-directional traffic, with LED lights that signal if the gate is in use or on standby. The access gate ties into a manned security desk located near the front doors.

Employees gain access to the building through either the Lifeline turnstiles, or a Winglock Swing access gate, while building visitors can receive credentials at the security desk.

King said: “We started the process looking at Boon Edam from a security and an aesthetic standpoint. We went through multiple product options but always had a Boon Edam product as the basis of the design. We have been happy with Boon Edam entrance solutions and we are planning to use them again for future projects.”